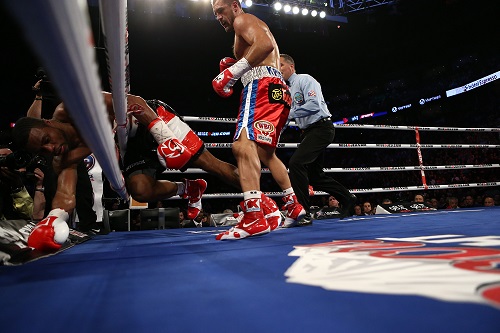 (Photo Credits: David Spagnolo/Main Events) In the much-anticipated main event of the evening, Sergey “Krusher” Kovalev (27-0-1, 24 KOs)* and Jean Pascal (29-3-1, 17 KOs) pleased fans with an action-packed battle. Both fighters started by trading some good shots, but Kovalev started to throw some nasty combinations in the third round to take the wind out of the hostile crowd at the Centre Bell in Montreal.

Just before the end of the third round, Kovalev knocked Pascal through the ropes but Pascal was saved by the bell. Sergey came out swinging in the fourth to try to capitalize on the near KO, but Pascal managed to stay on his feet and land a huge right to show Kovalev he was still in the fight. As the bell rang to end the fourth round, both men were still trading big shots.

The fifth round began quietly, but Pascal started to throw some intense combinations in the middle of the round. Kovalev continued to be the aggressor, however, landing some big shots of his own. The crowd at Centre Bell was deafening with cheers for Pascal and boos for Kovalev. Finally, in the eighth round, Sergey came on with a brutal attack that resulted in his own slip. While Sergey was getting up, Pascal looked noticeably rattled at the ropes. The two traded a couple more shots before referee Luis Pabon stopped the fight and declared Kovalev the winner by TKO in the eighth round.

After the fight, Kovalev insisted he will be ready for anything next. He said, “Thank you so much. How it started I didn’t like. After fourth round I gained control. He was mine after that. He got me a couple good punches. It is boxing. [On a potential fight with Stevenson] I am ready for anything. [On the possibility of a rematch] I am ready for any fights. If my promoter says I fight Jean Pascal again, I will fight him.”

Pascal felt the stoppage was premature, but said this after the fight, “Honestly, it was a good fight. It was an action fight for the fans. I tip my hat to Kovalev. He is a champion. I don’t know why the referee stopped the fight. It was a great fight. I was in the fight from the first round. We should do it again. I should have a rematch. I am a crowd-pleaser. At Centre Bell I am always going to give the fans a great fight. I will be back.”

In the fight for the #1 position in the IBF and USBA Heavyweight Championship stablemates Vyacheslav “Czar” Glazkov (20-0-1, 12 KOs) and Steve “USS” Cunningham (28-7, 13 KOs) came out of the box trading big punches. Cunningham appeared to have a slight edge in the first few rounds, but Glazkov, who is always a slow starter, began to show signs of life in the fifth round. The unofficial scorecards from the television and the media were all over the map on this fight, but the judges officially scored the fight 116-112, 115-113 and 116-112 all in favor of Czar Glazkov for a unanimous decision victory. The Ukrainian remains undefeated and will anxiously await to face the winner of Klitschko-Jennings next month.

The HBO World Championship Boxing telecast began with Main Events stablemates slugging it out for the vacant NABF Light Heavyweight Title, Isaac “Golden Boy” Chilemba (23-2-2, 10 KOs) of Malawi and Vasily “The Professor” Lepikhin (17-1, 9 KOs) of Russia. Both fighters looked good early on. In the second round, Chilemba got in some hard shots on the Russian but Lepikhin did not seem fazed. However, Chilemba continued to dominate Lepikhin for the remainder of the fight. Lepikhin managed to go the distance but Chilemba secured a decisive unanimous decision with two judges scoring the bout 99-91 and the third scoring it 100-90. This was the first career loss for Lepikhin and the first fight of the evening to go the distance.

Chilemba had this to say after the fight, “He did exactly what we expected. We were totally prepared for what he brought. I was patient and I capitalized on it. I think he ran out of ideas and I wasn’t going to fall for any of his games. I am very pleased with my performance tonight and I am grateful to now hold the NABF Light Heavyweight Championship Belt.”

In the final bout before the live HBO telecast, David Theroux (6-0, 4 KOs) of Sorel, QC, CAN stopped Lukasz Janik (12-10-1, 6 KOs) of Katowice, Poland in the third round. Janik fell victim to the three knockdown rule and the referee declared Theroux the winner by TKO at 2:31 in the third round.

Local favorite Dierry Jean (28-1, 20 KOs) of Montreal, Quebec, Canada and Carlos Manuel Reyes (24-4-1, 16 KOs) of Mao, Dominican Republic were scheduled for ten rounds of light heavyweight action. However, Jean knocked down Reyes in the third. He was then knocked down again a few seconds later and the referee stopped the fight.

Nadjib “Iron Jib” Mohammedi (38-3, 23 KOs) of Aix-en-Provence, France, the #1 contender in the IBF light heavyweight rankings, took on Lee Junior Campbell (8-2, 4 KOs) of Laurenburg, NC. Mohammedi dominated Campbell for every round until the referee stopped the fight in the sixth. As the IBF mandatory contender, he is scheduled to face Sergey “Krusher” Kovalev in his next fight.

After the fight, Mohammedi said, “I am very happy because this was a great place for a fight. This was my first fight with my new trainer, Abel Sanchez. Tonight I take my time. Campbell was tired and I worked to wear him down. This was a good win tonight. I was smart tonight. Everybody got to see me. Now Canada knows Nadjib Mohammedi.”

Light welterweight Yves Ulysse Junior (6-0, 4 KOs) of Montreal, Quebec, Canada and Miguel Antoine (17-2-1, 9 KOs) of Wildey, Barbados were scheduled for eight rounds but Junior knocked down Antoine three times in the fourth round. He continued his attack in the sixth round and knocked down Antoine at 2:43 and the referee stopped the fight.