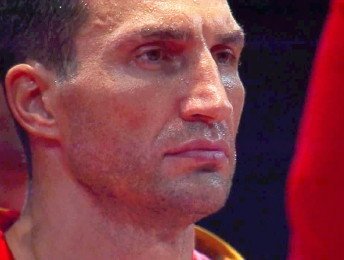 Povetkin could only land 59 punches in the entire fight according to CompuBox, and that’s pretty sad. The 6’2″ Povetkin didn’t have the size to get to Wladimir, and when he was in position to land a shot, Povetkin would get held by Wladimir. Povetkin could have kept firing punches in the clinch but he just seed content to wait until the referee Luis Pabon would break them apart. Wladimir had a dirty trick where he would nail Povetkin with uppercuts while leaning on his neck to cause him to bend over at the waist. It’s surprising that the referee let Wladimir get away with this move because it was pretty blatant. A lot of fighters would have retaliated with some kind of cheap shot of their own to keep Wladimir from thinking twice before he pulled that move, but Povetkin was totally passive.