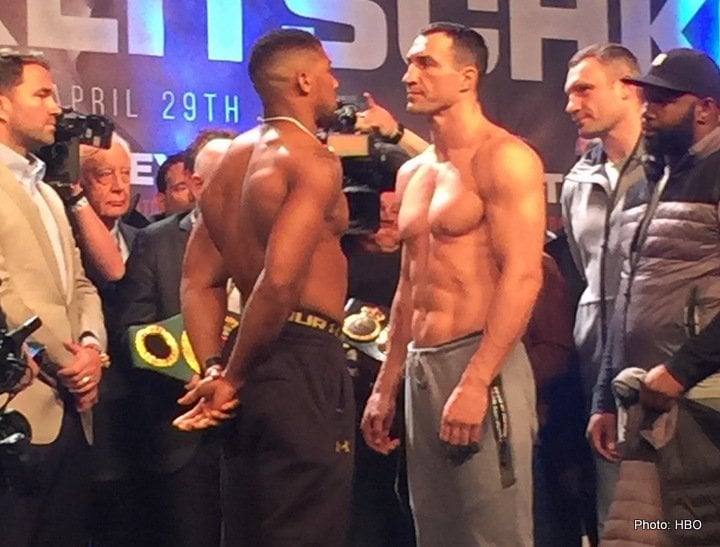 Although I have long lined up my bet for the forth coming fight which will see Wladimir Klitschko take upon the formidable Anthony Joshua. I have taken further analysis to uncover how this fight is likely to unfold on the 29th April 2017.

At the time that rumour of the bout filled boxing’s corridors, I was concerned that such a bout would prove rather too early for Joshua to present the highest manifestation of himself on fight night. He remains on a notable path and momentum favours him in the exploits he has undertaken in the last year and half.

I revisited some of Anthony Joshua’s recent bouts, none proved significant except the fire fight against Whyte.

Dillan Whyte was a worthy opponent, providing a great test but his calibre is not comparable to that of Klitschko. Their emotionally charged bout aroused public interest with the engulfing animosity the two fighters have shored in passing years. Joshua delivered, although at times his approach was reckless as their heated emotions fuelled what was an entertaining brawl. Joshua is young, athletic and bursting the seams with a furious rage of determination,consuming the challenges presented to him.

He possesses phenomenal ability; to believe that he had the facility to impregnate his dreams unto the boxing world. He entered boxing at a late age and it is without lies to admit that his physical attributes and aptitude have gifted him a unique opportunity to apply himself in the opportunities boxing conquests have to offer. At times he has foolishly been accused of being too nice to have success in boxing. However none of the foes subjected to his boulders in ring would give rise to such pondering. His cool and calculated demeanour is merely an articulation of an analytical pose before he launches his savage onslaught on those who dare to challenge him.

Wladimir recently reflected about his boxing journey and the times he has overcome young and powerful fighters, like Sam Peter. I do not believe that Wladimir would make the error of drawing close parallels between Peter and Joshua. Such thought would be a mistake; Peter had an immensely formidable club and put it to use in his initial bout with Wladimir. In no manner was Peter blessed with the technical brilliance that permeates through Wladimir and Joshua. It is for this reason that Wladimir was able to exploit the technical flaws and leave Peter capable yet desperately wanting.

An undefeated Peter went from fighting the likes of Jeremy Williams to challenging Wladimir and was forced to take lessons from Wladimir. One thing Wladimir has never been questioned about is his heart. He has an incredible drive to succeed and rewrite his journey in the decorated manner his gifts afford him. He has been written off many times and his resolve has allowed him to stage a campaign of unquestionable dominance over the last decade.

Wladimir’s endurance has at times in his career caused him issue.

I have reassessed his first fight with Lamon Brewster and that with Ross Purity. It is not that any of these fighters became miraculously equipped with the skillset set to dethrone Wladimir; rather Wladimir beat himself out. Klitschko has a solid chin, and although this chin has been questioned several times, it was his tank of endurance that has been an area of concern. It is something I believe could be a factor in this bout with Anthony Joshua.

If Wladimir struggles to find a method in which to better direct and control the action then he will be left trying to shield a formidable sea of pressure. I cannot see him matching Joshua for power, volume and endurance. If the strategy is to take Anthony into the latter rounds (deep end) then I would advise a revision of strategy as it could prove fatal. Anthony still possesses tremendous endurance even in the latter rounds and it may be in this area where he will be able to apply himself more effectively.

With reference to the Whyte fight, it is the only time I have seen Joshua tested. In no way do I compare their attributes and ability but Whyte had greater KO ability than those who had faced Joshua before. In their second round, he hooked Joshua with a beautiful left that had Joshua in some questionable position. However despite the challenge at hand, Joshua remained composed and present evading the pending onslaught served to him and cleared his facilities within time. Credit to Whyte because he consumed endless barrages, punches that have sent those before him into the lands of those unknown. What Joshua displayed in this fight was his ability to sustain his momentum with power and focus even in pressing states. It is what I believe is going to be necessary in his bout against Klitschko, because I do not see Wladimir merely falling to a short one punch KO. He is going to have to break Wladimir down in a manner that Tyson Fury could not even surmount.

Klitschko is undoubtedly one of the greatest fighters to grace the heavyweight division. He has overcome challenges throughout his career and is thanks not merely to his physical attributes but his formidable mental resolve. Anthony possesses devastating power and composure to exploit the weaknesses presented to him and the ability to dominate the division like those before him have. Tonight I believe Wladimir will be forced accept that a younger lion roars upon a new era in boxing.