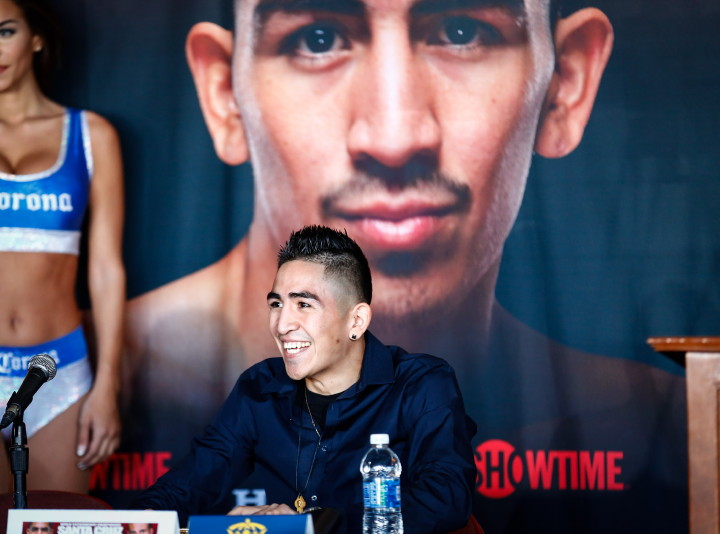 Also in attendance Thursday were Julio Ceja and Hugo Ruiz, who will enter the ring in a super bantamweight world title rematch as part of the SHOWTIME CHAMPIONSHIP BOXING® telecast beginning at 10 p.m. ET/7 p.m. PT.

The previously announced opening bout between undefeated heavyweights Gerald Washington (16-0-1, 11 KOs) and Oscar Rivas (18-0, 13 KOs) has been cancelled due to Rivas being unable to pass a mandatory eye-exam.

All of the televised fighters in the now doubleheader have promised to live up to their all-action styles and will provide great drama for fans on Saturday night at Honda Center. Santa Cruz will be making the first defense of his featherweight world title while Ceja puts his 122-pound title on the line after earning the vacant belt with a fifth round stoppage of Ruiz in an exciting back-and-forth fight in August.

“Headlining a televised card has been my childhood dream. I could have never imagined I was going to get this far. And Here I am, on my second main event, defending my title on a premium network. I’m so psyched. I cannot believe it.

“The first time I put the gloves on, I knew that I had found my craft, and I also knew that it was not going to be an easy road. I knew that I had to work hard to become a champion. So, I trained the hardest and I fought the hardest, and with my father by my side I got here, where I’m at today. I owe him everything.

“I remember watching all the great Mexican Champions and day dreaming about being like them one day. It felt unreachable. I thought it was impossible to get where they were. But I worked hard, really hard from the beginning.

“The most important thing is that the fans leave happy and get their money’s worth. I’m glad that Kiko has come prepared because we’re ready for a great fight.

“People are saying that I should walk through Kiko Martinez, but I don’t listen to that. I look at Kiko the same way I look at any other opponent. When we step inside the ring, we are equals.

“At the end of the day, the winner will be the fighter who has prepared more and who has imposed his will on the other man.

“I have faced much stronger boxers than Leo and come Saturday, all of those who did bet on me for this fight, I am going to make you a lot of money.

“I am excited and proud to know that Sergio Martinez will be present on Saturday supporting me. His guidance and presence

“My trainer could not be here, but we have not taken one day off in training camp and I have been pushed to my limit to prepare me for this fight. I’m thankful to Robert Garcia for being in my corner on Saturday.

“I know this is a great opportunity to fight Leo Santa Cruz and I will make the most of it. I’m going to leave everything inside the ring so that the fight fans enjoy a great championship matchup.

“I feel that Leo Santa Cruz is a great fighter, he has beat some incredible fighters. He’s a great athlete and boxer. Sometimes people will try to make him out to be more than he actually is but they are mistaken with what they see in me. I am not to be mistaken as the underdog here.

“As Hugo mentioned, we have both trained even harder than last time and we’re more prepared physically and mentally.

“I’m going to give everybody a great fight just like last time. I’m walking into the ring knowing my opponent very well. We’ve been to war. I know what to expect from him. I know about his punch and I know how to counter it.

“I’m going to be alert and ready. I’ll be a little more intelligent, because I know that he’s coming well prepared and he’s coming for the world title, but he’s not going to get it.
“There are going to be no surprises in this fight. Hugo Ruiz said that he was training harder this time. But I am too. I’ve trained very hard.

“The key for me to win this fight is to keep my hands up and to not give him one inch. I cannot be careless. I’ll be strategic and use my wisdom. I cannot come in with my hands down because I know I’ll pay for it. But nothing to worry about, we have rectified those issues in training camp. I’m ready. He’s not taking my belt away from me.

“I’m glad that he says he is better prepared this time because I am better than ever. My team has been instrumental in preparing me for this matchup.

“If you liked the first fight between us, then you are going to love this one.

“I’m excited to be fighting once again in Southern California. I’ve trained very hard and I have prepared myself for this world title opportunity.

“I’m looking forward to putting on a grand show for all my fans on Saturday night.”

“I hear Kiko has a great trainer on his corner. Robert Garcia is really good, but I have news for Kiko, his trainer is not going to fight for him.

“Once a fighter steps into the ring, he’s alone in there. There are no trainers and no great promoters that can fight for him.”

“Kiko speaks about this prestigious trainer and thinks that by mentioning him, he is going to intimidate us. He has something else coming. The trainer won’t fight for Kiko. Roberto Garcia has trained my son and knows Leo very well but that does not give Kiko the upper hand.”

“Southern California favorite Leo Santa Cruz returns to bring his action style to the ring. He will be opposed by a tough former world champion in Kiko Martinez who is sure to make this a tremendous fight.

“The first fight between Ceja and Ruiz was a true back and forth war. Should this pick up right where it left off, we will have a great fight to start the telecast.

“I’m looking forward to a great night on Saturday night in front of the fantastic Southern California boxing fans.”

“I’m so thankful to everyone for helping to bring boxing back to Orange County. It’s hard to believe that Julio Cesar Chavez fought here in 1996, because it seems like yesterday.

“We have a great arena and a great fan base that loves boxing here in Orange County. The card on Saturday is wonderful. I know these guys will be ready and I’m looking forward to an action-packed night on the 27th.

“This is a fight fan’s fight card and we are looking forward to some explosive action. I think everyone knows that the lighter weight classes, especially at the championship level, produce exciting fights. My favorite examples include the epic series between Israel Vazquez and Rafael Marquez, which are available on SHOWTIME platforms and should wet your appetite for what we will see on Saturday night.”