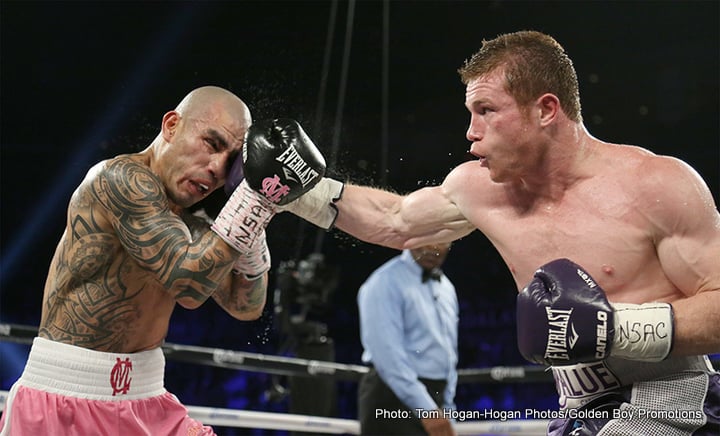 You know it’s a big fight when the respective promoters are paying to take the two fighters to a number of cities around the world to add further promotion and glamour to the event. And, later this month, the hugely intriguing, potentially thrilling middleweight title fight between Mexico’s Saul “Canelo” Alvarez and Amir “King” Khan will be treated to the press tour glitz.

In an effort to attract even more attention and ensure additional pay-per-view buys for the May 7th bout set for Las Vegas, Canelo, Khan and Oscar De La Hoya will visit London, New York and Los Angeles, and what’s more, the fans are invited to come out and meet them.

The three-city press tour will hit London, at The Park Plaza Riverbank hotel on Feb. 29th, then The Hard Rock Café on New York on March 1st and finally, Universal City Walk in L.A on March 2nd. Fight fans are encouraged to show up at each venue.

This fight has certainly generated plenty of news and attention, but will the fight prove a massive hit with the paying fans on fight night? The pay-per-view price for the fight has yet to be announced, but you can bet it won’t be cheap; probably around the $50 mark. If so, will the bout attract a buy-rate of 400,000? Half a mil? More?

Everyone agrees the fight, his first above the welterweight limit of 147-pounds, is a huge gamble for former 140-pound ruler Khan, but is the fight a big gamble for Golden Boy? Will the fight prove to be as big a hit as everyone involved hope will be the case? The fight has the sure look of a hit, but how many buys will the promoters be happy with? Will a big portion of fans give the fight a pass, due to how they feel Canelo – who could enter the ring as high as 175-pounds compared to somewhere around 160 for Khan on fight night – will simply be too big and too strong for the Brit?

Or will the intrigue surrounding this fight get the fans to part with their hard-earned cash? Some good judges are giving Khan and his speed a shot at winning, while even those people who expect a Canelo win are not expecting an ultra-quick blow-out. This fight will be exciting, so the consensus says, and this anticipation of a sizzler, even of the short and sweet variety (maybe around four to five all-action rounds) will ensure a box-office hit.

Canelo and Khan will also have plenty of fan admiration at each of the three venues they visit beginning February 29th.