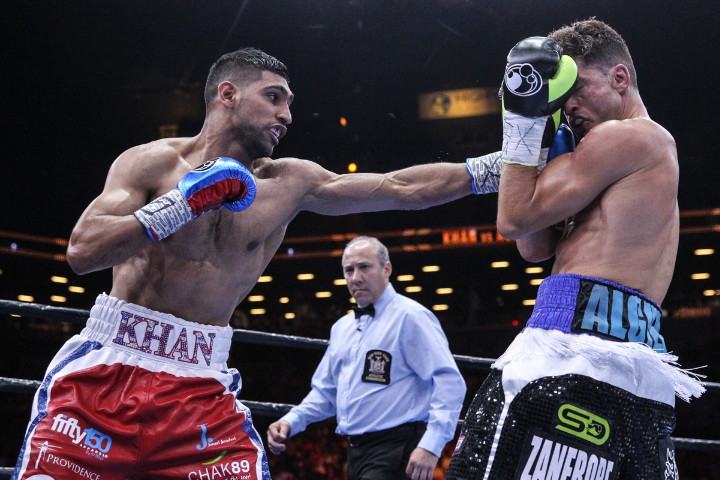 It hasn’t taken long for Amir Khan to find his way home following Friday night’s laboured victory over Chris Algieri – and after initially appearing to concede his performance may have dented his chances of a Floyd Mayweather fight – a series of interviews with various UK media outlets appear to show the Bolton man has changed his mind.

Last night on regional news in the North-West and now in an interview with TalkSport radio, the former Athens Olympian addressed both the issues of Floyd Mayweather and more pertinently, domestic rival Kell Brook – a man he is ostensibly avoiding, all the while insisting the IBF 147lb champion is yet to prove himself.

“The fight I want is the Mayweather fight and this is the closest we’ve ever got to it now.”

Yet with his twitter being absolutely bombarded recently by largely British fans angry at his seeming refusal to fight Sheffield’s ‘Special One’, Khan said;

“If my team tell me that it’s time to fight Kell Brook, I would, definitely. He really needs to prove himself by fighting the big names. He’s had an easy run. Holding the world title is one thing but taking on fights you know you’re going to win….he’s fooling the public, I think.”

Amir evidently isn’t familiar with the phrase ‘pot calling the Kettle black’ – and if you’re not either, then I suggest you look it up, you’ll see what I mean! “Fights he knows he’s going to win?”- Really, Amir?

Also, before Brook even held a version of the world title, Khan was saying much the same thing then. That Brook wasn’t known enough, brought nothing to the table, etc.

I’m not sure how much more he wants. It’s outside of Frampton/Quigg, arguably the biggest domestic fight there is and with a genuine world title on the line, I really fail to see Amir’s problem.

Yes, he earned more for fighting Algieri than Brook did for Gavin, but a huge Box Office card to prop it up would secure massive revenues for Khan and a belt to go off and defend in America should he so desire. More potential for higher future earnings. If he’s confident of victory, why not?

I personally believe he is talking like this now because he knows he has no intention of fighting Kell Brook, who – along with promoter Eddie Hearn – is getting sick and tired of him and seeking to move in other directions if he won’t fight.

Khan said of his own opposition, which since the move to 147 has been less than stellar;

“I’m fighting the tough guys out there, I’m going to war in the ring with the fighters I’m facing and pushing myself – whereas Kell Brook has taken the easy route by being world champion, picking his fights, choosing easy opponents and beating them. He’s having a walk in the park.”

“The only way he is going to make big money is to fight Amir Khan. He should really be looking at building a legacy and fighting the biggest names in boxing.”

“You hear he wants to fight the Mayweather’s and Pacquiao’s out there but when it comes down to it, he won’t fight them. He thinks his big cash ticket is against me and that if he loses against any of the big names, that won’t be there for him.”

I’ll leave you to decide on what side of the fence you sit.