Keith ‘One Time’ Thurman’s ego was out of control during Wednesday’s final press conference for his get-back fight against Mario Barrios this Saturday night.

The 33-year-old former WBA/WBC welterweight champion Thurman (29-1, 22 KOs) started off by saying that the 147-lb division is dead without him, and then he concluded that he’s a world champion even without a belt.

Thurman feels that his popularity and talent is such an extent he’s viewed as the star in the welterweight division regardless of him being belt-less at the moment.

One Time vows to make a statement

This Saturday, February 5th, Thurman and former WBA ‘regular’ light welterweight champion Barrios (26-1, 17 KOs) will headline on FOX Sports pay-per-view at the Michelob Ultra Arena in Las Vegas, Nevada. The start time is 9:00 p.m. ET/6:00 p.m. PT. This event is selling for a whopping $74.95 on FOX PPV, so it’s not going to be cheap.

The co-feature bout will see former four-division world champion Leo Santa Cruz returning from a knockout loss to Gervonta ‘Tank’ Davis to take on Keenan Carbajal in a warm-up fight at featherweight.

Santa Cruz (37-2-1, 19 KOs) last fought in October 2020 and was knocked out cold by Tank Davis in the sixth round in an exciting contest from start to finish in San Antonio, Texas.

We’ll see on Saturday if Santa Cruz still has any lingering effects from that brutal knockout.

“You know, this is my presidential campaign, baby,” ‘One Time’ Thurman said on Wednesday during the final press conference for Saturday’s fight with Barrios.

“Terence Crawford, Errol Spence, Yordenis Ugas. With a belt, without the belt, Keith ‘One Time’ Thurman is the champion of today – period. And that’s the statement I’m making Saturday night.”

If Thurman is going to be among the top welterweights in a genuine sense, he’s going to need to roll over Barrios and make it look easy. Those fighters would destroy Barrios without any problems, but whether Thurman will be up to the job is unknown.

In Thurman’s last two fights in 2019 against Manny Pacquiao and Josesito Lopez, he looked like he was shot and not the guy he used to be back in 2017 and earlier.

According to Thurman, he’d lost over 30 lbs in training camp for both of those fights, which left him depleted. We’ll have to take Thurman at his word on that. But if that is true, that’s his fault that he lacked the professionalism to stay in shape in between fights.

It’s also Thurman’s fault for staying out of the ring for close to three years before making his comeback this Saturday night. What’s obvious is that Thurman doesn’t live & breathe boxing.

You can tell that this is just a job to Thurman and one that he doesn’t enjoy enough for him to work hard at it like other fighters. When a person is going through the motion, you’re not getting the best results.

That’s why Barrios has a real chance of winning this fight on Saturday night because he’s dedicated to the sport, unlike Thurman, and her young and has been active.

Thurman looked awfully old & weight-drained at the final press conference on Wednesday. One can tell that his 2 1/2 years out of the ring has been hard on his body, as he looks like he lost a lot of weight.

During Thurman’s two years out of the ring, he fattened up to the point where his face appeared rounded like a ball.

Thurman looked like he was in the 190s at that point, which isn’t a lot of weight for larger people, but for a diminutive 5’7″ guy like him, that was very fat. 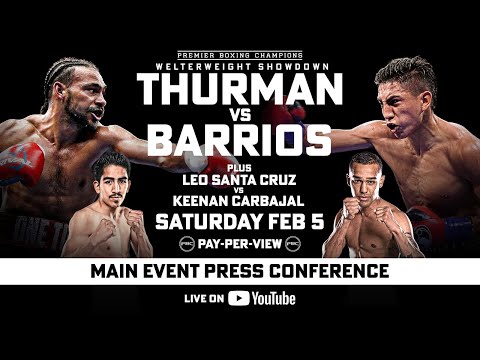