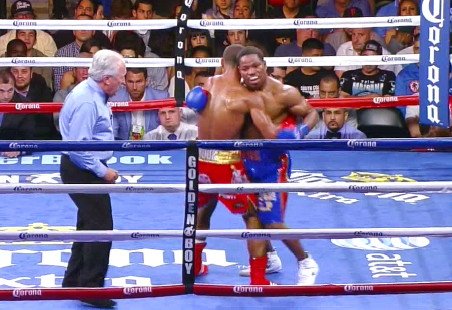 He enjoys a considerable base of support here in the UK – and top American welterweight Keith Thurman, who boxes Luis Collazo next month on Premier Boxing Champions on ESPN – has spoken out regarding the “Mayweather September Sweepstakes” to suggest that if it is not he who gets the call to face his countryman and P4P star for “Money’s” 49th fight, then British IBF champion Kell Brook is more than deserving of the opportunity.

Speaking to BehindTheGloves.com Thurman also went as far as to suggest that Brook’s domestic rival Amir Khan – who has been publicly chasing a Floyd fight for over 2 years – has yet to show he truly belongs at 147 and thus is not as deserving a challenger.

On who should get the Floyd fight,”One Time” said;

“Outside of myself – and I am the highest ranked American fighter in the welterweight division today – I believe the most deserving would be Kell Brook.”

“He deserves it. He’s fought one good American fighter in Shawn Porter and had a great performance. I believe he hasn’t been fully tested yet but he has had a tremendous career for himself. He’s done a lot in the sport and he’s a big welterweight – he has good size, good frame, good boxing technique and a good defence as well.”

Echoing the sentiment of a vast majority of the boxing community regarding Khan, he said;

“I believe Kell Brook deserves that (fight) over somebody like Amir Khan, who has also been brought up. Amir – we know he’s fast, we know he can move about but I just think if it’s really gonna be Floyd’s last fight? (then) I don’t think it’s gonna be exciting enough for the fans.”

Further stating the case against Khan landing the “Money Shot”, he said;

“I think if he (Khan) wants to make a statement in the welterweight division then he should either fight me or fight Shawn Porter. That way he can measure his skills and prove that he can fight a big, strong welterweight.”

“The last time he fought a puncher – Danny Garcia – he got stopped. He was outclassing Danny for a few rounds but then Danny was able to time him. So who is to say Shawn Porter or I can’t do the same?”

“Khan can fight Kell Brook and prove himself in the welterweight division. He needs to fight a true welterweight before calling out Floyd Mayweather.”