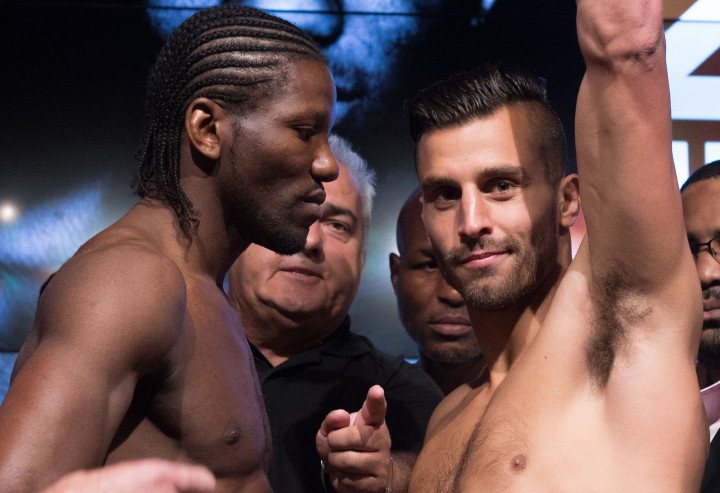 (Photo credit: Photo Credit: Eye of The Tiger Management) We are spoilt for choice as boxing fans this weekend as no fewer than three big clashes hit our screens. We of course have the PBC Broner v Porter card, as well as the “Son of God’s” return in Oakland when Andre Ward takes on Britain’s Paul Smith – who incidentally came in a whopping 4 lbs over the agreed 172 catch-weight.

However the one fight that has seemingly gone under the radar is the IBF 160 lb title fight between big -punching French-Canadian David Lemieux and France’s teak tough Hassan N’Dam. It is on Fox Sports 2 in the US and has thankfully been picked up by Boxnation in the UK.

It is the weekend’s only genuine world title fight and will potentially have a big impact on the rest of those in the division – particularly in sorting out an opponent for a potential unification with Kazakh wrecking-machine Gennady Golovkin somewhere down the line.

Lemieux, Oscar De La Hoya’s new “Golden Boy” of Canada, certainly matches his mentor in terms of film-star looks and mass appeal, yet has truly to convince the majority of the boxing press outside of the country that he is anything more than a one-dimensional puncher.

He has improved massively since his only blemishes – a 7th round stoppage at the hands of Marco Antonio Rubio and a MD loss to Joachim Alcine in 2011 – and truly announced himself as a contender last year – capturing the NABF title by knocking out Fernando Guerrero in May and then stopping perennial contender Gabe Rosado in New York on his US debut on HBO in December.

Determined to show he is a new fighter, Lemieux said;

“My style’s different and so is my determination. I believe I have more abilities than N’Dam does and I’ll show that. My defence is my offence. Sometimes I take risks for the fans, (but) keep watching and you will see.”

N’Dam will be best remembered by many for his 6 knockdown thriller against Peter Quillin back in 2012. What a fight that was – and though it was the seemingly unstoppable N’Dam who touched down on each of those occasions – dropping a wide decision – one felt he was always potentially just one shot away from being able to turn it all around and he did not stop coming that night.

There’s no quit in the man – that’s for sure and that fight remains his only loss in 32 outings as a pro.

In his last fight 7 months ago, he out-classed and out hustled New York’s Curtis Stevens, dropping him along the way – so it’s more than evident N’Dam can punch a little bit too. His 56% KO ratio attests to this.

He even believes it’s possible to stop David early in front of what is sure to be a pro-Lemieux crowd;

“I promise a world class performance in Montreal against hometown favourite David Lemieux for the IBF middleweight world championship. I will adapt to whatever style he brings. I can KO him in the first round or any other round. He has never fought anyone with my skill-set.”

“Lemieux is coming in at the deep-end and I will prove that he doesn’t belong here.”

Personally, on the past performances I have seen of both, I would be inclined to agree with the French fighter who is ranked #4 with the IBF. He’s got good feet and movement, can punch with both hands, and is dangerous with the uppercut especially when on the inside. His work rate is also tremendous – something that has also been called into question with the Canadian fighter.

David Lemieux IS also very hittable – that’s for sure.

I think it’s entirely likely that Lemieux will go looking for N’Dam aggressively early on and if the Frenchman can execute a box and move plan as he has done so effectively in the past, then it could be a long night for David Lemieux getting picked off as he tries to come forward and back N’Dam up.

I do however expect Lemieux’s power to be a big factor in this fight – his 89% KO ratio is frightening – yes – however N’Dam is beyond durable, having never been stopped and he has to be there for Lemieux to hit and hurt him.

I’m also saddened this fight has been seemingly so poorly promoted outside of Canada. Like the recent Provodnikov v Matthysse fight that DID NOT disappoint, it has also suffered due to it’s protagonists not speaking English as a first language which obviously makes the fighters less accessible to the fans and media.

I’m thinking this could possibly even beat Broner v Porter in terms of action and is definitely one to try and watch live. I’ll be watching and recording all three of the cards and feel pretty confident in predicting that this could well be the best fight of all three.

I’m picking N’Dam to pull off an upset and beat Lemieux on points, possibly after touching down himself along the way.

Either way, I’m really looking forward to this one and am confident it will deliver the action.

It’s on Boxnation in the UK at 2am.