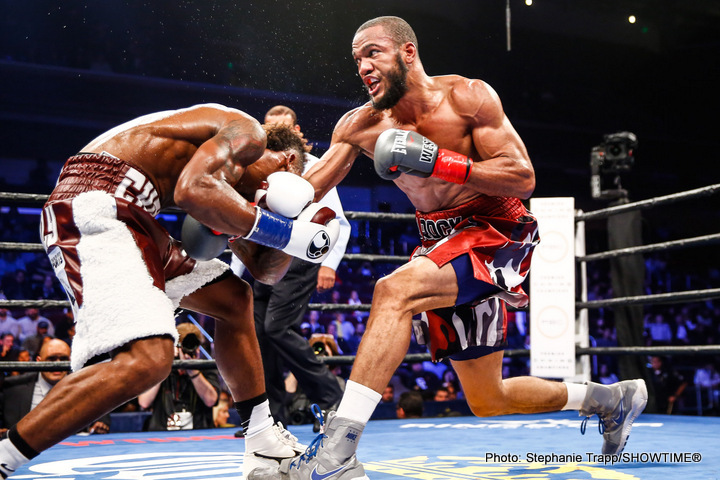 Julian “J-Rock” Williams and Nathaniel Gallimore, two young, skilled contenders in the stacked 154-pound division, will clash in a 12-round world title eliminator on Saturday, April 7 live on SHOWTIME from the Hard Rock Hotel & Casino in Las Vegas and presented by Premier Boxing Champions.

Williams and Gallimore will look to put themselves into the mandatory position for the IBF Junior Middleweight World Title currently held by Hurd.

Tickets for the show, which is promoted by TGB Promotions and Mayweather Promotions, are on sale now and available by visiting AXS.com or the Hard Rock Hotel & Casino, Las Vegas Box Office.

The epitome of a Philadelphia fighter, Williams (24-1-1, 15 KOs) has won his last two fights after suffering the first loss of his career to Jermall Charlo in his first world title fight in 2016 on SHOWTIME. The 27-year-old Williams rebounded by stopping Joshua Conley last June before picking up a victory over former champion Ishe Smith in his most recent fight in November.

“This is going to be a really good fight on April 7,” said Williams “Gallimore has been talking a big game, but I’ve got a big chip on my shoulder, and I’ve been training like it. I think he’s going to bring out something different in me. He’s going to find out that there are different levels to this game. He’s a bit of a stalker in the ring and he’s been knocking people out. He thinks he’s a puncher, but he hasn’t really fought the level of competition that I have. I don’t care if he’s training with Buddy McGirt now, because no one can save him when he’s in that ring.”

The 29-year-old Gallimore (20-1-1, 17 KOs) has stayed active while rising up the ranks at 154-pounds and picking up four knockout victories in 2017. The Jamaican fighter, who now trains in California with Buddy McGirt, impressively stopped previously unbeaten Jeison Rosario and then once-beaten Justin DeLoach in two performances that announced his arrival as 154-pound contender.

“This is going to be my coming out year,” said Gallimore. “This is a huge opportunity to present my skills and my abilities to the world. There’s no mistaking why I’m here, and I’ll make a statement starting with ‘J-Pebbles’ Williams. I call him ‘J-Pebbles’ because he’s not a ‘J-Rock.’ He’s an average fighter. There’s nothing special about him. The best way he can prepare is to do chin pushups, because I’m going to test his chin and that’s the only thing that can protect him. I’m going to dismantle him piece-by-piece, round-by-round, and when that time comes to seek and destroy, I’m going to take him out. I’m the one they should be worried about.”