Undefeated heavyweight contender Joe ‘Juggernaut’ Joyce (14-0, 13 KOs) proved to be too much for the experienced Christian Hammer knocking him down four times en route to a fourth-round knockout on Saturday night at the OVO Arena in London.

Joyce’s trainer Ismael Salas came up with the perfect game plan to attack the body of the 34-year-old Hammer and it worked out well for the ‘Juggernaut.’

In the first two rounds, Hammer caught Joyce with repeated overhand right hands to the head when he was coming forward. Joyce, 36, made it easy for Hammer by not using any head movement or variety in his attacks.

After a couple of rough rounds for Joyce, he dropped Hammer in the third, which proved to be the beginning of the end for the Romanian fighter.

In the fourth round, Joyce attacked Hammer’s soft midsection, knocking him down three times before the referee waved it off at the 1:20 mark.

“It was good, and fun night’s work. I think it was a bit tough early on before I got my range, my timing to kind of work him out,” said Joe Joyce to Behind The Gloves on his win over Christian Hammer.

“He was game, and caught me with some big shots,” Joyce continued. “It was exciting. I got the job done at the end and knocked him down a couple of times.

“I saw the body shots were working, as [coach Ismael] Salas was saying. So I worked the body, and he went down and went out of there.

“Yeah, there were a few shots and things we were working on,” said Joyce when asked if the game plan was to attack the body of the 34-year-old Hammer. 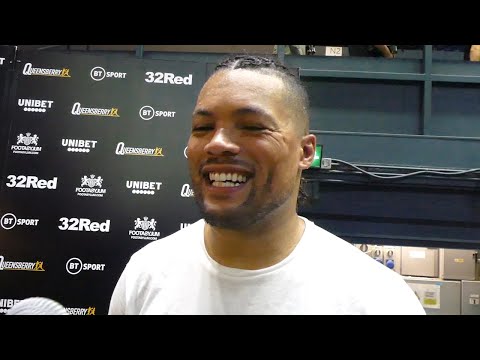 “I kind of let Salas analyze and work with me on which shots I needed to do, and we practiced those and they work on the night.

“Yeah, but it’s okay, I can take them,” Joyce said when asked if he took a few too many right-hand shots from Hammer tonight.

“There’s obviously the top three names I could mention, but there are plenty on the outskirts that maybe would be more realistic while the undisputed fight and all those shenanigans goes on,” said Joyce when asked who he would like to fight on September 24th when he returns to the ring.

“I’m ranked #1 with the WBO, so that’s the title I’ll be mandated for soon and WBC #2. I’m at the top level now, so there are plenty of good fights. I’ll fight anyone. I’m ready.

“Yeah, that’s a good fight, I’d love to fight him, yeah,” said Joyce when asked if he’d be interested in fighting Dillian Whyte in September. “It would be good.

“I don’t know. He’s coming off of a loss [to Tyson Fury], so maybe he wants one beforehand before he gets back in there before he gets Juggernauted,” said Joyce.

It’s difficult to picture Dillian Whyte agreeing to fight Joe Joyce in his next fight, given what happened to him in his sixth-round knockout loss to WBC champion Tyson Fury on April 23rd.

If the 34-year-old Whyte wants a quick second shot at a world title, taking on Joyce could be the way to do it because if he wins, he’d take his WBO mandatory spot. Other than that, it could take many years before Whyte gets a chance to battle for a world title again.

Joyce says he wants to make up for lost time by fighting three times this year, as he was out of the ring for 12 months before tonight’s match with Hammer.