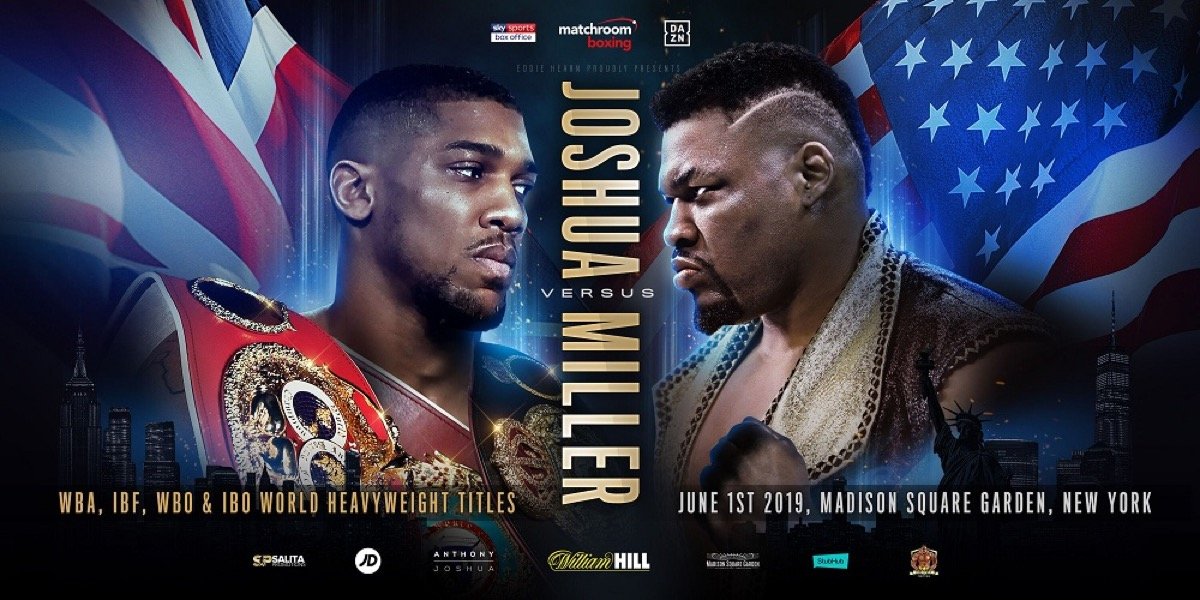 Anthony Joshua will put his heavyweight world titles on the line once again, as he makes his long-awaited US debut against Jarrell Miller on 1 June, at iconic Madison Square Garden.

Live on Sky Sports Box Office, Joshua will head stateside for his 23rd professional fight, and his first since defeating Alexander Povetkin in front of a packed Wembley crowd back in September 2018.

Anthony Joshua said; “It has been an honour and a blessing to fight at some of the best venues in the world at home in the UK, not least Wembley Stadium, but the time has come to head across the Atlantic and defend my Heavyweight titles in the USA. I am looking forward to taking on another challenge with a good boxer and a brilliant talker. It will be an exciting fight, I will leave nothing to chance and plan on dismantling Miller in style to make my mark.”

There’s no doubt Miller will try to end Joshua’s 22-0 (21 KO) fight record and has already made bold claims about AJ’s trip across the Atlantic: “AJ is making a huge mistake coming over here to fight me in my own backyard. He wants to announce himself on the American stage but all he’s doing is delivering me those belts by hand. Its dog eat dog in the ring and this dog has got a bigger bite, he’ll be leaving New York empty-handed. This is the fight that I’ve been chasing all my life and on June 1 I’m going to achieve the thing I was born to do and win the Heavyweight Championship of the World. That punk AJ is standing in the way of my dreams and on June 1 he’s getting run the hell over.”

Eddie Hearn, Matchroom Boxing Managing Director added; “AJ has created an incredible ‘Lion’s Den’ atmosphere in the UK and we plan to bring that energy to New York, on a card that will be stacked with British vs American talent. When you look at the Heavyweight greats that have graced the renowned ‘Mecca of Boxing’, the names of Ali, Frazier, Marciano and Tyson stand firm and 1 June will be a moment when the world will witness AJ’s turn.”

Adam Smith, Head of Sky Sports Boxing, said; “We are delighted to be showing this massive occasion on Sky Sports Box Office and our team will provide every step of an enticing build up. Every boxer wants to conquer America and the time has come for AJ at the iconic Madison Square Garden. It’s been the home of countless classics, from Ali v Frasier to the controversial bout that was called a draw between Evander Holyfield and Lennox Lewis 20 years ago. It’s another chapter in the Joshua story.”

He followed this up with another win against Bogdan Dinu in four rounds, to claim the interim NABA Heavyweight title. Now, Miller returns to his home city to fulfil a lifelong dream of fighting for the World Heavyweight crown.

Anthony Joshua’s New York fight against Jarrell Miller has been confirmed and William Hill, for whom Joshua is global ambassador, make him 1/8 favourite to emerge victorious. His opponent is 9/2 to win the bout and it is 25/1 to end in a draw.

AJ is expected to wow the crowd in his first fight outside the UK as a professional and he is odds-on at 8/15 to win the fight by knockout and 9/4 to do so by decision.

“In his first foray outside the UK, AJ is expected to bag a victory and it could well be over in a New York minute,” said William Hill spokesman Joe Crilly.

About Sky
With 23 million customers across seven countries, Sky is Europe’s leading media and entertainment company and is proud to be part of the Comcast group.

We have 31,000 colleagues and together we want to connect our customers to more of what they love, including our award-winning original productions, like Patrick Melrose and Save Me, and great shows from our partners including HBO, Showtime and Warner Bros. And our ever improving technology makes it even easier for customers to watch more of the shows they love with personalised recommendations and voice control and, our online streaming service, NOW TV, brings all the enjoyment of Sky with the flexibility of a contract free service.

We treat our customers better than anyone else in our field, as Ofcom’s complaints data shows, and we look after our staff too. Sky is one of The Times Top 50 employers for women and we’re in Stonewall’s list of Top 50 LGBT-Inclusive employers.

We also use our position as the leading entertainment business in Europe to do the right thing. As part of Sky Ocean Rescue campaign we’re committing to be completely single-use plastic free by 2020, we’re investing £25million over five years in ocean-saving tech and we’re supporting the WWF to protect our oceans with designated Marine Protected Areas.