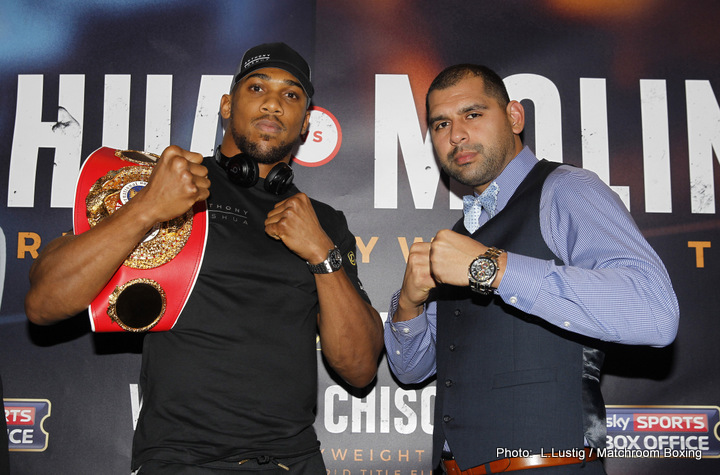 Let’s take a look at each bout here and try and make an accurate prediction on how the action will go.

The super-slick Crawford figures to have the advantage in almost every department barring sheer heart, which the gutsy Molina has in spades. Unless Molina can drag the defending champ into his kind of knockdown, drag-out, battle of attrition war, it looks like another dominant win for Crawford.

Molina will give it his best shot but he gets outboxed and stopped late on.

READ:  Joe Joyce's Manager Sam Jones On The Daniel Dubois Fight: It's Going To Be A Different Date With The Same Result

This one, set for New Zealand, could be the fight of Saturday night. Two hungry and unbeaten heavies who can punch, have skills (Ruiz, Bob Arum says, has the fastest heavyweight hands since the dazzling Muhammad Ali) and are desperate to win. Parker enjoys home advantage, Ruiz has arguably more experience.

Expect a fast pace, plenty of leather thrown on both sides and switching momentums, before Parker finally emerges with a very close, perhaps debatable, decision victory in a fight so good it screams for a rematch.

Another blowout for AJ? A tremendous upset scored by the man who has made an art out of bouncing back? I go for something in-between. Joshua, despite his claims of not being distracted by the presence of the mighty Wladimir Klitschko, who he is all set to face next April, will try too hard to send a power warning to the former champ. Trying too hard to score the highlight reel KO, AJ will allow the dangerously determined Molina to blast him with a counter right hand to the head.

This will happen in the second, after a cagey opener. To the alarm of the crowd, Joshua will wobble severely, being forced to hold on to see out the round as the challenger lets go with all he has trying to get the finish. Joshua will come out cautiously in the third and, as Molina goes for it again, it will be the defending champ’s turn to land a hurtful counter. Molina will go down, beat the count, but be waved off as he is on unsteady legs. Some will cry premature stoppage.