Apia, Samoa. It might not quite be ‘The Rumble in the Jungle,’ but as far flung and unexpected locations for a boxing match go the tropical balmy climes of Samoa are right up there. And there is a palpable sense of anticipation breezing through this tiny island nation right now ahead of Joseph Parker’s clash with his first southpaw opponent, American, Jason Bergman.

Even Parker’s promoters Duco have cheekily drawn parables with Ali and Foreman’s historic fight, labelling Parker and Bergman’s clash the slightly more clunky sounding ‘The Rumble in Paradise.’ Whether a rumble ensues remains to be seen but the exotic surroundings that make up Samoa’s sunny islands definitely qualifies as paradise.

Bergman too is entering into the spirit of proceedings delivering an Ali-esque promise to defeat Parker and ‘shock the world,’ which as catchy as it sounds may rank as one of the more outlandish overstatements in an outlandish sport.

Putting historical significances to one side there are certain similarities to the fight in Zaire all those years ago; Samoa is a country of modest financial resources, starved of world class sporting events, but now a big show has landed on their doorstep and the star is something of a local boy no less.

World rated heavyweight Joseph Parker may have been born in New Zealand but his parents both hail from Samoa and the family retains property in the country. Such is Parker’s status in his parent’s country of birth he has been granted the high chief status title of, ‘Lupesoliali Laauli’ and he also retains strong roots with the tiny island nation, holidaying there every year.

For Joseph it’s a combination of Samoan blood and Kiwi heart. 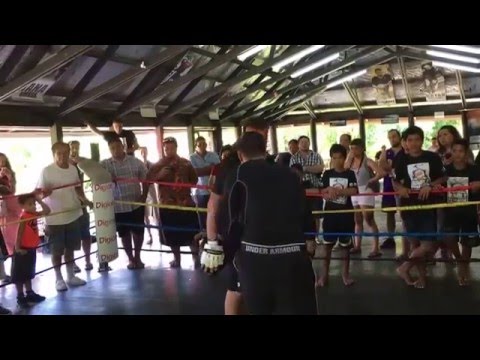 Like David Tua before him much of what makes Joseph Parker a terrific heavyweight prospect is that inherited Samoan DNA: fast twitch muscle with size and power seamlessly connected to that indefinable pugilistic quality; which is the sheer joy of fighting, the warrior spirit.

And it is in this spirit that Parker is wanting to give back. By modern standards 2015 was a very busy year for the heavyweight with five fights completed and the bout with Bergman being his sixth in a ten-month period. By rights Parker should be in holiday mode, lying on a beach and enjoying some quality time to rest and recuperate.

This is the hurt business after all and even though Parker dished out to his opponents more than their fair share of punishment in 2015 there were still training camps to endure, drills to be done and rounds to be sparred, it all takes its toll. And Joseph openly admits he enters this fight with more than the usual amount of bumps and niggles, and that a rest, both physically and emotionally is much needed.

So then why do it? Why take this fight, in tough tropical conditions against an opponent who has nothing to lose and everything to gain?

‘I come here every year on vacation with my family but last year I also came with my promoters, David and Dean and took them up to the family home and into the hills, showing them where I came from. That’s where we first had the idea that it would be awesome to fight in Samoa. We found the people in Samoa really easy to work with.’

And I assume it’s something very special for your parents to bring you back to Samoa now you’re climbing up the rankings?

‘Yes they’re very proud. My parents were both born here and at times it was a hard life for both of them and they went to New Zealand to give their kids a better life but coming back here is very humbling and fighting where they were born. And a lot of the fans can’t see me fight in person because it’s too far away and they can’t afford it. It’s great to be here doing this, no doubt.’

Joseph’s explanation is only amplified when you look at the faces of all the people you meet in Samoa; at every shop, at every bus stop and in every nook and cranny of this tropical paradise, it is Joseph Parker mania.

His arrival into the international airport was jammed to the rafters, a thousand-person sea of wide grins and sparkling eyes, there to welcome home their rising Samoan star. And in keeping with rock star royalty, a police escort was formed to facilitate the transportation of the fighter to his hotel.

Read:  Joe Joyce's Granite Chin – Truly Something To Marvel Over!

The 2007 Samoan Rugby Sevens team is currently on the five-dollar note; I jokingly wonder if Joseph wins a world title whether he might also be looking forward to his face being added to the local currency.

‘Now I think I wanna make the ten-dollar note, so I’m worth five more than them,’ he laughs back.

In a sport that is so often looked at in terms of PPV revenue and rankings manipulation, where ‘if it makes money it makes sense,’ it’s beyond unusual to see a fight such as this one being made without any major upside for the main attraction, other than the gesture of giving back to his people and to acknowledge the role that his roots and heritage have played in his journey thus far.

Despite having played each other a multiplicity of times it wasn’t until 2015 that the New Zealand All Blacks visited Samoan shores to face the Samoans for the first time on their home turf in a rugby international which captured the imagination of the entire island nation. The wave of euphoria that enveloped the All Blacks on their arrival was a moment that many of the players have remarked as a high point in their storied careers.

In many ways, both with the All Blacks visit and now Joseph Parker’s upcoming tussle with Bergman, reminds you of what sport can achieve, of what sport can be; the transcendental properties of sport, that ability to invoke a tremendous sense of pride and ownership in the team or athlete you support.

And so it is with the Samoan people who welcome you with their open arms and disarming smiles, humbled that you the esteemed traveller have taken the time and made the effort to travel over crystal blue seas to visit their tiny country to witness the event that is about to unfold.

As for the fight itself, Parker has entered it with a few annoying niggles. There have been lower back spasms and a right elbow that often feels sorer and stiffer than he would like.

Coach Kevin Barry has been unusually frank in his assessment of Parker’s latest camp, as he transitions into facing his first southpaw opponent, openly stating that in his last set of sparring he has seen Joseph get caught more cleanly than in any other camp previously. This kind of talk could easily be dismissed as slick pre-fight sales tactics from the veteran trainer if it weren’t for the puffiness in Parker’s face, testimony to the fact that he has had hands laid on him.

And when it comes to Bergman’s ranking as Parker himself says about facing a left handed fighter for the first time in his professional career, you have to start somewhere, and Southpaw seems to be the trendy word at heavyweight right now.

Regarding the state of the division I also ask Joseph for his assessment of the three high profile fights from the previous weekend.

‘Charles Martin I have to be honest didn’t look like anything too special. He’s a tall, big guy but that’s about it. As for Deontay Wilder, he’s a good fighter but I’m not sure if we’ve seen too many improvements from him since he became champ. The power is definitely legit, but skill-wise I’m not so sure he’s developed. With Haye his speed looked good and his counter punching looked good but we didn’t learn so much from that fight.’

It may have been a short camp for Parker, clocking in at a brisk three weeks, but you feel that with Parker’s superior size, speed and power he will do something of a number on the lesser talented Bergman. And one suspects that for a fight with such special significance for Joseph, he will be keen to end this fight island-style, and that means Bergman hitting the deck, and hitting it hard.

Welcome to Samoa, happy to see you sir, it must be something in the water……………