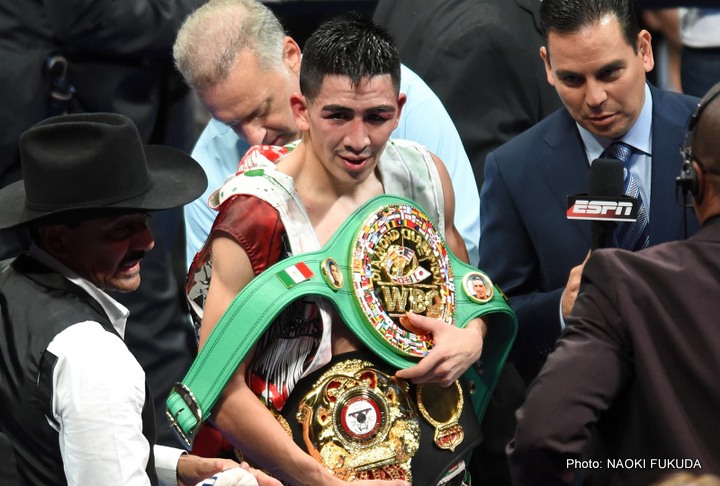 “I’m excited to have another opportunity to fight in front of my L.A. friends,” said Santa Cruz. “I’ve been in the gym and staying ready for anyone that’s put in front of me. I’m going to be 100 percent ready for this fight and I plan to go out there and look great.”

“I’m thrilled for the opportunity to face off against Leo Santa Cruz on February 27,” said Martinez. “Santa Cruz is clearly one of the very best featherweights in the world but I have what it takes. I’ve already begun working very hard with my longtime trainer Gaby Sarmiento and I will be victorious.”

“It’s always great to be able to bring quality fights to the Southern California fight fans,” said Tom Brown of TGB Promotions. “The Leo Santa Cruz vs. Kiko Martinez battle couldn’t be in a better venue or town and it will provide non-stop action from the opening bell. TGB Promotions is honored to once again work with SHOWTIME and the team at the Honda Center on another great event.”

The popular Mexican-American Santa Cruz (31-0-1, 17 KOs), fighting out of Los Angeles, won the 126-pound title in a “Fight of the Year” candidate against former three-division champ Abner Mares last August at STAPLES Center in Los Angeles. It was just the second fight in the featherweight division for Santa Cruz, who has won belts at 118 and 122 pounds while earning a reputation as one of boxing’s most active and exciting fighters. The 27-year-old also holds victories over Cristian Mijares and Eric Morel and has fought in world title bouts in 10 of his last 12 fights since 2012.

Martinez (35-6-0, 26 KOs), of Valenciana, Spain, is a former super bantamweight world champion who won the IBF belt with a sixth-round knockout of Jhonatan Romero in 2013. The 29-year-old made two successful title defenses against Jeffrey Mathebula and long-time titlist Hozumi Hasegawa before losing a decision in 2014 in a rematch against Carl Frampton. Martinez challenged Scott Quigg for the 122-pound belt in July of 2015 before moving up to 126 pounds, where he bounced back to record knockouts in two of his three fights in just two months. A world traveler who frequently fights on his opponent’s home turf, Martinez will now challenge Santa Cruz in just his second fight in the U.S. with his sights set on becoming a two-division world champion.