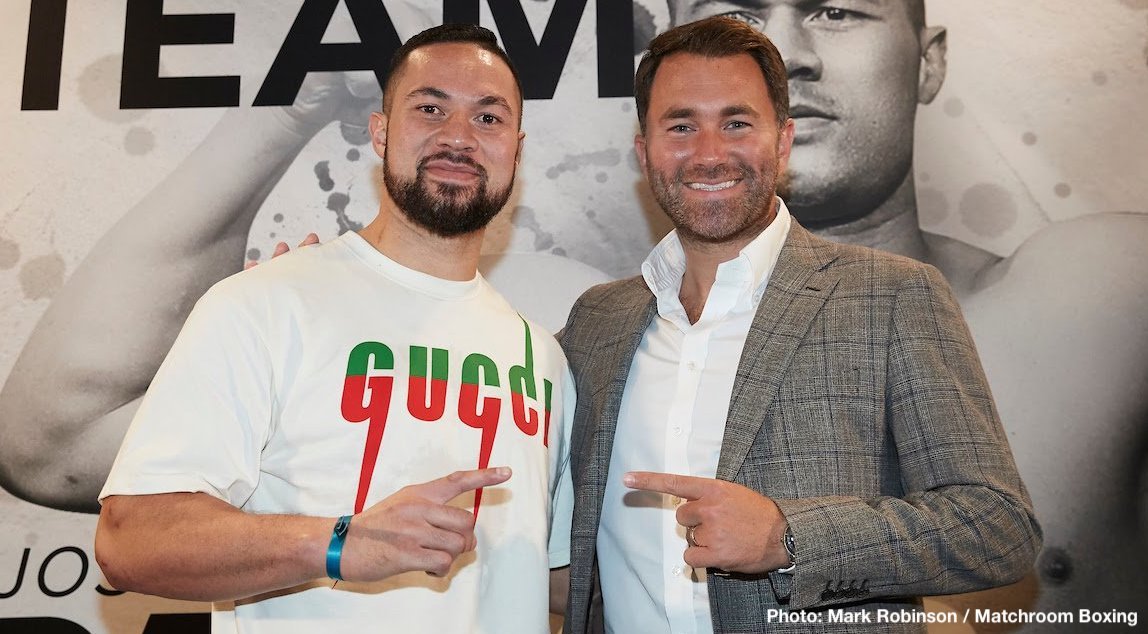 Joseph Parker is ready to step up his ambitions to reclaim his World champion status as he faces Alex Leapai at the Dunkin’ Donuts Center in Providence, Rhode Island on Saturday, live on DAZN in the US and on Sky Sports in the UK.

Parker (25-2 19 KOs) returned to winning ways at home in Christchurch, New Zealand in December with a third round stoppage following two blockbuster nights in Britain. The Kiwi first took on Anthony Joshua in a unification battle in Cardiff in March 2018, surrendering his WBO crown on points. Parker then returned to the UK and met Joshua’s old foe Dillian Whyte and served up a fight of the year contender in London in July, climbing off the canvas in the second and ninth rounds to floor Whyte in the final session, but being edged out on the cards.

Parker landed the vacant WBO title against Andy Ruiz Jr, whose recent stunning win over Joshua in New York has thrown the division wide open. The Kiwi was in the Big Apple that weekend after signing a promotional deal with Matchroom Boxing USA and Eddie Hearn, and the 27 year old had warned that the Mexican was a real threat to the unbeaten Briton’s World reign.

With Ruiz and Joshua set to meet in a rematch later in the year, while Whyte meets Oscar Rivas in another blockbuster clash in England’s capital in a month’s time. With WBC king Deontay Wilder and former World champion Tyson Fury likely to clash in rematch in 2020, Parker knows he must see off Leapai (32-7-4 26 KOs) in style in Rhode Island to get into position to retain his World champion status.

“The only way to settle the score is to fight again,” said Parker. “I will fight any top fighter but I want to fight for World titles again, I know where I am and that I need to climb to the top again.

“Andy’s got a great chin and so do I. We’re different fighters from 2016, he’s improved dramatically and we saw that in the performance, and I am a lot better than i was when we first fought back then.

“Everyone was leaning towards AJ getting an easy victory but we knew what Andy presented and what he brought to the fight, so it wasn’t a surprise to us, but we didn’t know he was going to stop him like that so it was a surprise in that sense, but we knew he had the ability to put in a great performance like that so congratulations to him and his team.

“Andy has got the blueprint to beat him. I wouldn’t say exposed him, but you put pressure on, throw punches and combinations and you do your best to land, that’s what Andy did. I am a different fighter to Andy, he takes a punch to give a punch whereas I try my best to avoid punches, but he showed that it works and he took some to land a lot more.

“Tyson and I have a great relationship, he’s kind of like an older brother in the same division as me. From the time I was with him in Manchester in September 2017 until now, he’s completely changed physically and mentally, he’s a lot happier. You never say never when it comes to fighting anyone.”

Joseph Parker will face Alex Leapai on his return to action at the Dunkin’ Donuts Center in Providence, Rhode Island on Saturday June 29 live on DAZN in the US and on Sky Sports in the UK.

Parker (25-2 19 KOs) returned to action in December with a third round KO win in Christchurch following two huge fights in the UK, first taking on Anthony Joshua in a unification blockbuster in Cardiff in March 2018 and then shared 12 roller-coaster rounds with Dillian Whyte in London in July.

The Kiwi fights for the first time under the Matchroom Boxing USA banner and national pride will be at stake as he meets Leapai (32-7-4 26 KOs). The Samoan-Australian, who spent part of his childhood in New Zealand, boxes in America for the first time in a lengthy career that saw him challenge Wladimir Klitschko for his World titles in April 2014.

Parker’s ultimate goal is to regain his status as World champion and the former WBO ruler believes he will shine on July 29, but Leapai is hoping to pull off a shock in the style of newly crowned World champion Andy Ruiz Jr, who dethroned Parker’s old foe Anthony Joshua in the last Heavyweight action on DAZN.

“Over the past six years of being a professional this is the first time that I’ve come into camp at a good weight,” said Parker. “I’m enjoying camp more as a result I think, because we’re working more on skills and technique rather than focusing on losing weight. I feel faster, I feel everything is clicking, less injuries and everything is on track.”

“With each opponent you see what their style brings and you adjust accordingly what you will do in the ring, there’s a lot that I am doing that I am excited about, like making angels and throwing different combinations, and I’m just looking forward to putting it on display on June 29.

“A stoppage would be nice, that’s the goal going into every fight. I just have to change up the mind set to not only go in there and win, but go in and KO someone and make a statement. This is my first fight with Matchroom Boxing USA and DAZN so I want to make that statement, there’s no pressure but I do have to go out there and look good.

“I would love to avenge the losses that I have had against Anthony Joshua and Dillian Whyte. I’ll fight them tomorrow. But Dillian is trying to fight for the WBC title so respect to him for that, but if the opportunity came along I would love that fight again.”

“I am the Samoan Andy Ruiz – the guy everyone writes off,” said Leapai. “This will be the second massive upset this year because Parker is getting sparked. Then I’m going to take Andy’s Snickers off him!”

“This is going to be an exciting fight between two big punchers with plenty of pride on the line,” said promoter Eddie Hearn. “For Joe, it’s about looking good and making a statement to the division that he is ready to try and reclaim his World title. For Alex, it’s a shot to nothing to put himself right back in the mix – he’s talking a great game but we expect a show stopping performance from Joseph Parker in Providence on June 29.

Tickets are on sale NOW – starting at just $28 (including fees) from https://www1.ticketmaster.com