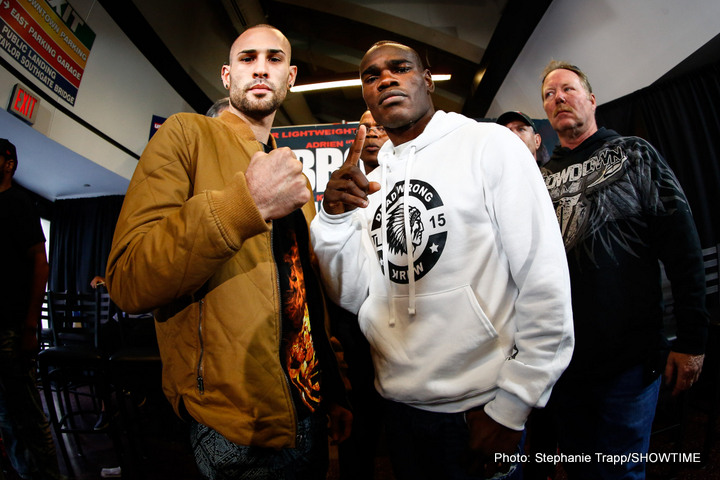 Unbeaten IBF 130lb champion Jose Pedraza (20-0, 12ko), makes the maiden defence of his title this weekend in Ohio on the Broner/Allakhverdiev undercard, and is looking to make a statement over Bahamian former world title challenger Edner Cherry (34-6-2, 19ko).

The former 2008 Olympian won the belt back in June on the undercard of Deontay Wilder’s maligned heavyweight title fight with Eric Molina, beating Russia’s Andriy Klimov in a competent and assured performance, and the Puerto Rican stylist is looking to go one better against the experienced Cherry.

“We train hard all the time, we are in great shape, and we prepare for every fight like the opponent is the champion,” Pedraza said. “Edner Cherry is a very experienced fighter. He is a strong guy and good puncher. I am in great shape and I’m ready to fight 12 rounds.

“This could very well be the toughest fight of my career. He hasn’t lost in seven years, but we are very prepared, studied the fight well and are ready to go come Saturday.”

Cherry was last beaten in a 2008 140 lb world tile tilt by current WBO welterweight champion Timothy Bradley, and last boxed in July, at 135, on the undercard of the Thurman/Collazo PBC on ESPN bill from Florida. He will be coming down to 130 for only the second time in his career, although claims that this is his most comfortable fighting weight.

“Ever since my title loss to Timothy Bradley in 2008, I’ve pushed myself to get back into this position and to give myself the opportunity for a title shot at the right weight class,” Cherry said.

“I’m finally in the right weight class for me. Bradley was the much bigger fighter when we fought. That was a mistake on our end. He just was the bigger guy, but I was in the ring with one of the best fighters in the world and I really learned from that fight.

“I tell people that I am so glad that I didn’t win that title against Bradley because, in my mind, I would’ve been fighting at 140, but that wasn’t my weight class. I would’ve been risking my life fighting at 140. I’m glad I didn’t win it but I’m also glad I hung in there and got myself back into a big fight. I’ve been preparing for this fight for 15 years, and it’s going to show on Saturday,” he added.

Pedraza predictably disagrees with his opponents assertions, and said his youth and momentum will prove too much for the 33 year old Cherry as he goes hunting to the body in search of the finish.

“I’m ready for 12 rounds but I want to get him out of there sooner. I’m going to work the body hard to try to get that done. My youth will play a huge part in this fight. I’m much younger than him and, without a doubt, I will win this fight.”

One fighter with half an eye on proceedings tomorrow will be Britain’s Stephen Smith (23-1, 13ko), who worked his way into the mandatory position to the IBF title with his impressive stoppage victory over Devis Boschiero last month in Liverpool.