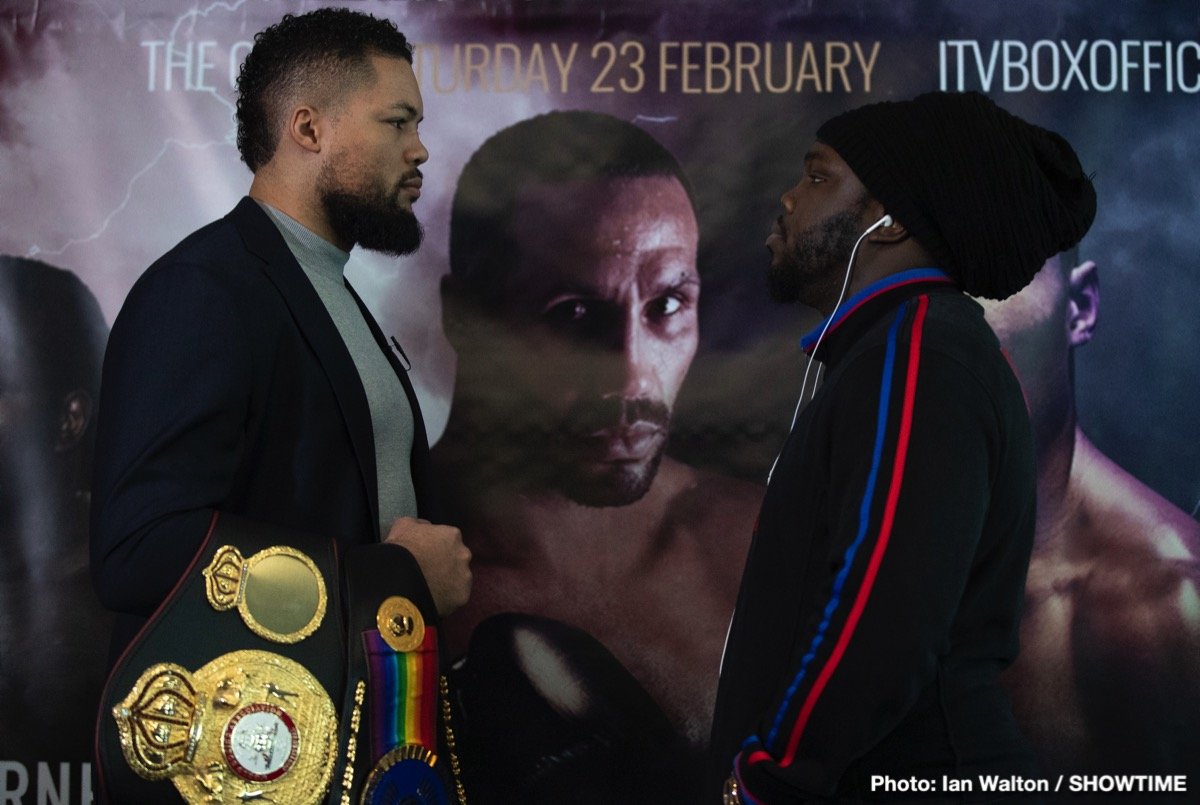 Undefeated heavyweight Joe Joyce and former heavyweight world champion Bermane Stiverne sounded off at the final press conference on Wednesday for their 12-round showdown that opens a SHOWTIME CHAMPIONSHIP BOXING doubleheader this Saturday live on SHOWTIME (3:45 p.m. ET/12:45 p.m. PT) from The O2 in London.

Joyce (7-0, 7 KOs), Stiverne (25-3-1, 21 KOs) and their respective camps had to be separated as they debated the truth surrounding a 2017 sparring session in Las Vegas. Stiverne was preparing for his November 2017 rematch with WBC Heavyweight World Champion Deontay Wilder while Joyce was readying for his professional debut after a decorated amateur career. Both Joyce and Stiverne promised to erase any doubt surrounding the sparring session this Saturday.

A 2016 Olympic Silver Medalist, Joyce aims to continue his perfect knockout streak as a professional and inch closer to a world title shot. A former WBC Heavyweight World Champion, Stiverne hopes to prove he’s still a force in the stacked heavyweight division following a disappointing 2017 loss to Wilder.

Here’s what the fighters and their camps had to say during Wednesday’s press conference at Intercontinental at The O2.

“I had a really good camp in Big Bear and I’m ready to go and put a dent on Stiverne on Saturday night.

“Bermane Stiverne, all respect to him, he’s a former WBC Champion. I have a lot of respect for him for taking this fight. It’s the perfect fight right now for my situation. It’s a great stepping stone for my career.

“I’m top five in the WBA at the moment, I’m moving fast. Each fight is getting me closer and closer to the top three names in the heavyweight division. I’m just going to keep on working hard in the gym and if everything goes well I’ll be back training for the next one soon. This year I’m going to make big strides.

“It was four rounds [of sparring] but I think that’s all he could do at that stage. He says he took me to school but I went to university, if you know what I mean. When we sparred in his camp in Las Vegas he was a bit lethargic. I don’t really care, though – they can talk however they want but we’ll see what happens Saturday night.

“I know how good I am and I just need to show all of you guys. I’m happy with Richard [Schaefer] having the faith in me. I’m just going to do my job and show how good I am.

“He’s towards the end of his career. He’s going to want to beat me to get back in the mix, but good luck to him. I’d be happy if I beat him before seventh or eighth round. I’m not going to be Wilder. I won’t beat him in under a round. I’m not there yet, but I will be eventually.

“This is quite a step up for me. I have my eyes set on bigger fights and he is the right step for me. To be honest, I was surprised that he accepted the challenge. I think that he believes that a win over me will help him regain his status as a top heavyweight. He won’t beat me.

“He’s going to try to come in and try to take me out early, but he’s not going to be able. I’m ready for him. I’m confident that towards the end of the year my name will be among the top five heavyweights in the world.

“A Wilder fight, that’s a fight to make in the future. That’s a good fight, I like the WBC belt.”

“It’s good to be back. I feel great. I came prepared. We can talk all we want right now but what matters is what happens Saturday night. I’m prepared. My team made sure of that.

“I’m not looking past Joyce. That’s what I have to take care of on Saturday. I’m well prepared. We can talk about the future once that business is taken care of.

“There are a lot of stories about our sparring, but it wasn’t anything too interesting. It was a couple, maybe four rounds. Nothing to talk about. I’m not going into this fight based on the sparring we had. I’ve never disrespected this man. I posted a picture and thanked him for the sparring.

“Obviously they are taking this fight based on what happened in the last fight with Wilder and I’m glad. They are underestimating me. We could go back and forth all day but that’s not what matters. What matters is what happens on Saturday at The O2.

“I’m a stumbling block, not a stepping stone.

“I’m glad he thinks I’m here as a gatekeeper or stepping stone. I’m not really worried about that. They didn’t call me last minute – I was already in the gym. However they view me, I’m ready. I’ll tell you one thing, they didn’t catch me with my pants down. I’m ready.

“I would have packed it up or hung it up if I wasn’t ready. I’m coming to fight.

“Wilder hit me with a right hand in the rematch and that was it. You’re not going to see the same thing on Saturday. This is the perfect fight for me. They’re taking me too lightly and it’s a mistake.”

“We’ve prepared for the Bermane that fought Chris Arreola.

“These are the types of fights that will prepare us for the elite later this year.

“I wasn’t with Joe when his sparring with Stiverne took place, but if it got a guy like Stiverne heated up, it must have been something.

“We feel he’s ready for the next step. Stiverne is the kind of test we have to go through to move forward with his career.

“Joyce is probably the most decorated fighter in the U.K. He’s smart, very athletic and he’s going to be a force to be reckoned with just like George Foreman was.

“In the heavyweight division one punch can define the outcome of a fight so we are preparing for the guy that fought Deontay Wilder for 12 rounds, the guy that defeated Arreola.”

“I brought Tony Thompson to fight David Price, which they thought it was an accident and we knocked him out in the second round. They thought it was a fluke and they brought us back again and we stopped him again. I’m not a giant slayer, but I’m 2-0. I stopped an Olympic bronze medalist and now I’m going to stop a silver medalist. We’re working our way up to gold.

“Joe needs to grow up a bit. He’s not ready for this. We’re going to kick that ass. My opinion, I think he should have waited a little bit. He should have traveled the road instead of trying to leap over the fence. When the bell rings we’ll know.”

“This card is historic and one of many ITV cards that Al Haymon and the PBC will bring to the U.K. fans.

“DeGale and Eubank is a 50/50 fight, but this fight is going to steal the night. When I saw Stiverne walk into the room I knew that he means business. When Stiverne is in tremendous shape he is a very difficult guy to beat.

“I’m going to make a bold statement – Joe Joyce today is the best heavyweight in the world. By the end of the year, he’ll be heavyweight champion of the world. By next year he’ll be ready to take on Wilder, [Anthony] Joshua and [Tyson] Fury.

“Joyce is a generational talent. This is going to be a very difficult test. We want to see the best Stiverne because Joe Joyce is going to make a statement.”