Tyson Fury says he views interim WBO heavyweight champion Joe Joyce as the #2 fighter on the planet after watching him dispatch his good friend Joseph Parker in the 11th round last Saturday night in Manchester, England.

Fury states that he only sees Joyce (15-0, 14 KOs) as being behind him in the division, but even with that, he’s not certain. He says he wants to eventually fight Joyce so he can find out how good he is.

Fury might not have the power or the chin to deal with 12 hard rounds against Joyce. If Fury doesn’t retire after he faces Oleksandr Usyk in the first quarter of 2023, it’ll be interesting to see him and Joyce battle it out for the #1 spot.

We don’t know how good Fury is because the acclaim that he’s gotten recently have come against Deontay Wilder, and Joyce would likely do an even better job against the Bronze Bomber. Joyce would probably beat Wilder without resorting to leaning on him the way Fury did.

“I got to say, big Joe Joyce is the second best heavyweight in the world behind myself,” said Fury on social media.

“On his day, given his moment, who knows if he can beat me or not. I think we’ll have to find out one of these days. I just looked at these prospects and mandatory’s for world titles. Zhang, Hrgovic, and everybody else.

“I’ve changed my mind and think big Joe Joyce is #2 heavyweight in the world. Who knows if he’s #1? One day, we’ll have to find out who’s best out of me and him.

“He’s coming for everybody, don’t you worry about that.  Come on, big Joe,” said Fury.

“Probably Usyk, Fury, AJ, Wilder, and Dillian Whyte,” said Joe Joyce to Sky Sports Boxing when asked who he wants to fight next.

“I’m WBO interim, so if Usyk doesn’t want to fight me, he has to vacate the belt, and I get elevated to full champion. This time, I’ll be prepared and have a proper training camp geared towards him,” said Joyce when asked how a rematch with Usyk would go.

“I think I’d start to get to him if I kept the pressure on him. I’ll fight anyone in the top five. As you can see, I’m ready,” said Joyce. 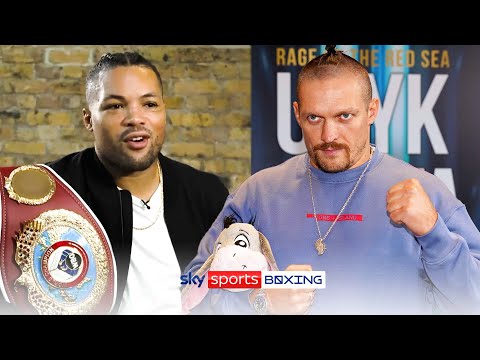