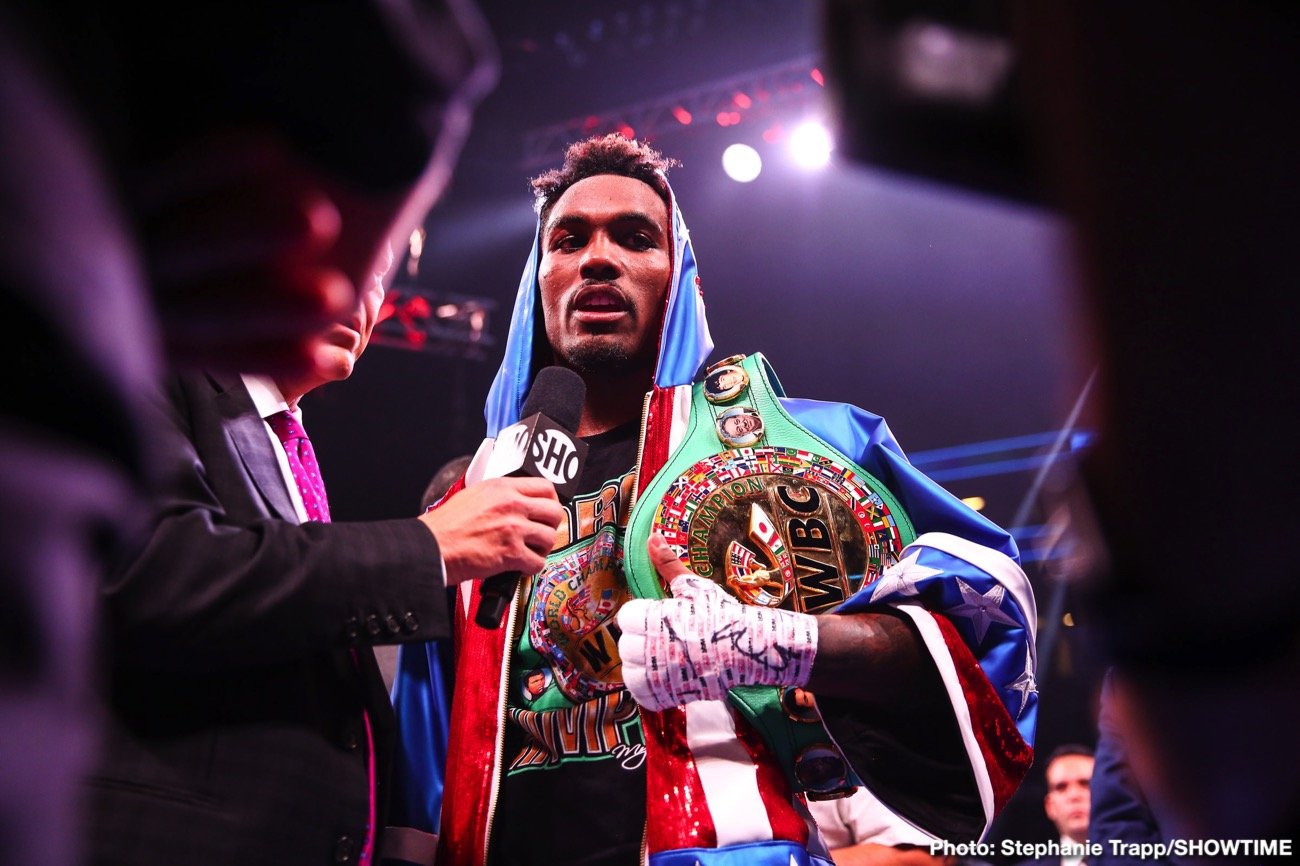 Jermall Charlo is taking a shotgun approach to getting a mega-fight by targeting the Canelo Alvarez vs. Caleb Plant or the Gennadiy Golovkin vs.  Ryota Murata winner for him to battle for big money in 2022.

In the meantime, WBC middleweight champion Charlo (32-0, 22 KOs) could potentially face WBO 160-lb champion Demetrius ‘Boo Boo’ Andrade (30-0, 18 KOs) in a unification fight at 160, which would make Jermall a two-belt champion if he wins.

It would be impressive if Jermall can follow his brother Jermell,  who is on the verge of becoming the undisputed champion at 154.

If Jermall can become the undisputed champion at 160, it would open the door for him to take on Canelo Alvarez if the Mexican star doesn’t elect to face him next.

After 13 years in the pros, Charlo’s career is taking off, as he’s a late-bloomer, who only now is on the verge of making massive money against Canelo, Golovkin, Plant, and Andrade.

Charlo is coming off a thrilling 12 round unanimous decision victory over the heavy-handed Juan Macias Montiel last June in Houston, Texas.

That was a war in which both fighters were hurt, but Charlo carried through to get the decision.  Montiel took enormous punishment, but stayed in and inflicted his own damage against a tired-out Jermall in the later rounds.

“Nah, it’s not underrated but of course there are some bigger fights to have,”  said Jermall to PBC Podcast on whether his resume is undefeated.

“[Demetrius] Andrade has been talking, and [Gennadiy] Golovkin is about to unify, so maybe we can fight for all the belts or something like that.

“It would be a mega-fight. If he wins his fight with Murata and unifies, and then we can unify together,” said Charlo of fighting Golovkin.

“Yeah, hopefully, whoever is the winner [of Canelo vs. Plant], hopefully we can make a mega-deal. I’m looking for a mega-deal and extend my legacy,”  said Jermall.

Canelo has expressed interest in fighting Charlo, but we don’t know if he’s seriously interested. In many of these interviews, the interviewers rattle off a bunch of names to Canelo, asking him if he’d like to fight different top guys.

Naturally, Canelo says he’s willing to fight them all, but it doesn’t mean that he actually will. Jermall would be a tough out for Canelo, and he might not want any of that smoke, particularly if he has a hard time with Plant on Saturday.

If Canelo destroys Plant, his confidence will soar through the roof, and he’d be more likely to agree to fight Jermall next.  It’ll likely come down to how Canelo performs against Plant on whether he’ll want to take a risky fight against Jermall next.

For Jermall, if he can’t get the winner of the Canelo vs. Plant fight next, he needs to go after Demetrius Andrade because he can afford to continue to fight guys like Montiel, Dennis Hogan, Brandon Adams, Matt Korobov, and Sergiy Derevyanchyenko without stunting his career.