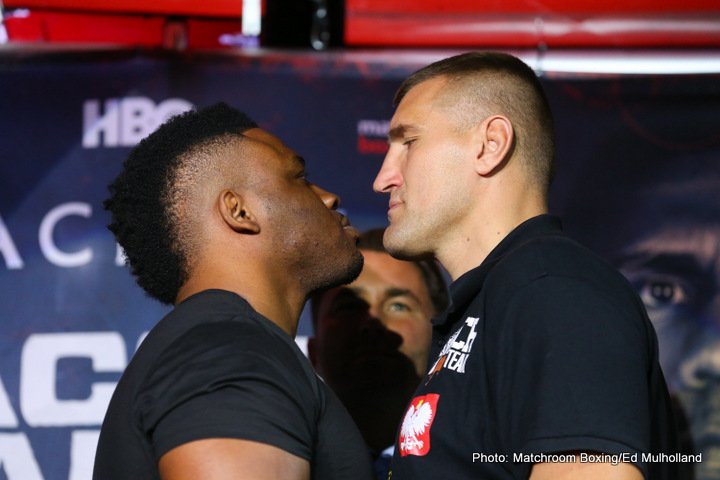 The stakes may well have risen for tomorrow night’s already interesting heavyweight clash between unbeaten contender Jarrell Miller and the experienced Mariusz Wach. Promoter Eddie Hearn, who may or may not sign Miller up (and co-promote along with Dmitry Salita and Greg Cohen) says that if “Big Baby” puts on a big show he might just get a crack at Anthony Joshua next year (if the Wilder and/or Joseph Parker talks stall).

One of the best talkers, and punchers, in the game in terms of the fast-rising contenders on the scene, Miller has fans, and Hearn, interested. Is he the real deal, or is the one-time (briefly) MMA fighter more hype than substance? We want to find out and Hearn for one says we will find out plenty about Miller in the “tough” and “dangerous” Wach fight.

Wach, a 6’7” operator from Poland who has been in with the best including Wladimir Klitschko and Alexander Povetkin, is, like Miller, talking a great fight. Miller has promised to knock Wach’s head off, while Wach has vowed to KO Miller, in doing so make his head “explode.” “There will be plenty of blood,” Wach told RingTV.com.

Big, strong, durable and experienced, Wach is also extremely hittable, quite slow (especially in comparison to Miller who, in his last fight, a semi-impressive stoppage win over Gerald Washington in July, displayed fast hands and reflexes despite tipping in an a whopping 298 pounds) and he is the older man by eight years at age 37.

Can Miller chop down Wach, 33-2(17), or will “The Viking,” who is coming off a useful March points win over Erkan Teper, chop down the tree himself – or at least be able to stick around for all twelve rounds? It’s an interesting fight but it really is a Miller showcase. Miller, 19-0-1(17) has called out just about every big name heavyweight you care to mention, and he needs to keep his unbeaten record if he’s to get the big fights he wants. More importantly, he needs to look good doing it.

Miller-Wach could be entertaining for a while (and Wach should be in shape, set as he was to face British heavyweight Dillian Whyte earlier in the summer, only for Whyte to pull out with a foot injury) – but this fight is all about Miller and whether or not he looks good and can manage to score a KO. A highlight-reel KO would really get people talking about Miller.

Having trimmed down substantially from the 298 he carried in his last fight, Miller should have too much speed, strength, power and ambition for Wach. Look for “Big Baby” to get the stoppage somewhere after the seventh round.