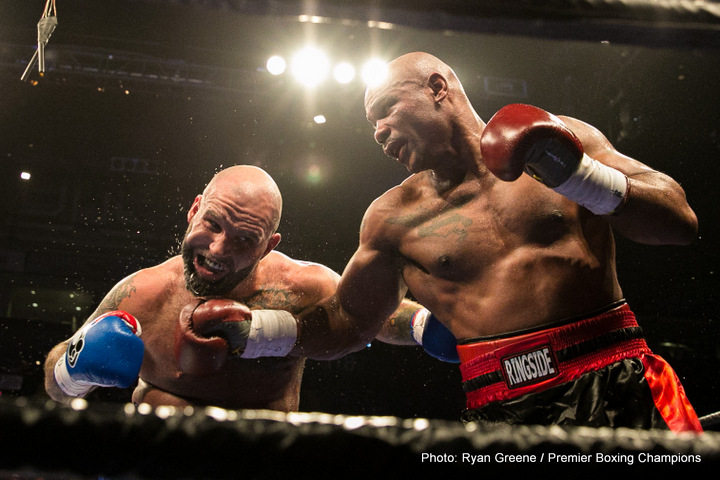 An interesting and potentially explosive heavyweight match-up will take place in Russia on the 27th of this month as unbeaten Sergey Kuzmin, 11-0(8) will take a step up against tough and hungry Amir Mansour, 23-2-1(16).

30 year old Kuzmin, a decent amateur who went pro three years ago and has compiled a nice record whilst boxing mostly in Russia but also fighting in the US and in Canada, has stopped useful heavyweights like Darnell Wilson, Irineu Costa Junior and Malcolm Tann. Some people have quite high hopes for the unbeaten puncher.

Fans are quite familiar with Manour. The tough southpaw is now aged 45 but he looks, always, in fantastic physical condition and he is almost always involved in exciting, fan-friendly battles – his wars with Steve Cunningham (L10) and Dominic Breazeale (Lrtd5) being crammed full of knockdowns and fierce trading; Mansour’s one-punch KO of the sturdy Fred Kassi also proving memorable.

Despite his age and the fact that he is relatively small for the heavyweight division at just 6’1” (Kuzmin is no giant at 6’3”) Mansour is ready and willing to fight just about anybody; as his taking this risky fight in Russia goes to show. Mansour is fast, aggressive and he carries good power, “Hard Core” also has a solid chin (his sole stoppage loss, to Breazeale, came after he suffered a nasty tongue injury, the rip needing over 30 stitches).

Who wins this one?

It’s quite a tough one to pick. Kuzmin, in his fourth fight of this year, is taking his biggest fight yet, while Mansour – who is coming off a pretty big points win over Travis Kauffman – will of course be fighting two foes: Kuzmin and Father Time. The vacant WBC international title will be on the line and both men will be aiming to get the win and take a significant step up the WBC rankings. Mansour has called out WBC heavyweight king Deontay Wilder more than once and though that fight looks incredibly unlikely, Mansour may land himself a big fight if he takes Kuzmin’s unbeaten record later this month.

This one should be exciting to watch, with a KO or stoppage likely one way or the other.