YouTuber Jake Paul quite accurately predicted that he would knock out former UFC star Ben Askren in the 1st round in their cruiserweight contender last Saturday, and his prediction turned out to be 100% accurate with his blazing victory at the Mercedes-Benz Stadium in Atlanta

Askren, 36, never stood a chance, as he bowled over quickly by a right hand from Jake in round one, leaving the referee with little choice but to stop the contest.

You can argue that the fight should have been allowed to continue after the knockdown, but the referee saw something in the eyes of the former UFC fighter Askren that made him not want to allow it to continue.

The right hand that Jake, 24, Askren with was a tremendous shot, and it would have dropped almost anyone. You can’t give Askren too much flak for being hurt by that punch.

Moments before, Jake barely missed a similar right hand that had knockout written all over it. Askren should have seen been wary of that punch after that, but he had too many things to be concerned about.

Jake had thrown a left hook in the opening seconds of the fight that would have decapitated Askren if it had landed. The punch barely missed, luckily for Askren.

“I told y’all I was going to do it in the first round. I told y’all I’m a real fighter,” said Jake Paul after the fight. “I don’t know how many times I’ve gotta prove myself that this is for real.”

Although Askren weighed in at 191 pounds to make the cruiserweight limit for the fight, he looked a badly out of shape middleweight [160] that was carrying around 30 lbs of fat.

This wasn’t a true cruiserweight that Jake Paul was facing, and, of course, he wasn’t fighting a boxer. Askren was a GREAT amateur wrestler before he took up MMA, and had some success before his career went belly up.

It’s pretty clear that Jake WON’T receive the credit from the knowledgable boxing fans until he starts taking on REAL boxers, preferable contenders in the cruiserweight division.

What Jake appears to be doing by focusing on non-boxers is that he’s falling the Floyd Mayweather Jr model of targeting vulnerable fighters with no boxing skills for him to fight in his PPV events, and he’s hooking in the casual fans.

It’s working thus far for Jake Paul. But eventually, Jake will get diminishing returns when the casuals realize that his fights have no real sporting value.

Jake’s fights are glorified mismatches, all of them. He’ll be able to sell his ‘fights’ for a while, but eventually, the fans will grow tired of paying to see garbage fights that aren’t competitive. 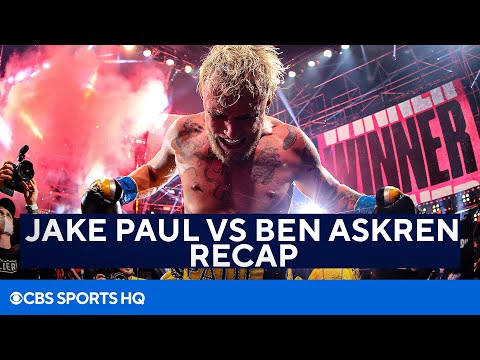 If Jake Paul wants to impress the hardcore boing fans and keep his casuals pouring money into his fights, he’s going to need to take on real boxers, not out-of-shape washed-up former MMA guys like Askren.

These would be great options for Jake Paul to show fans that he’s a “real fighter” and not just robbing the gullible: