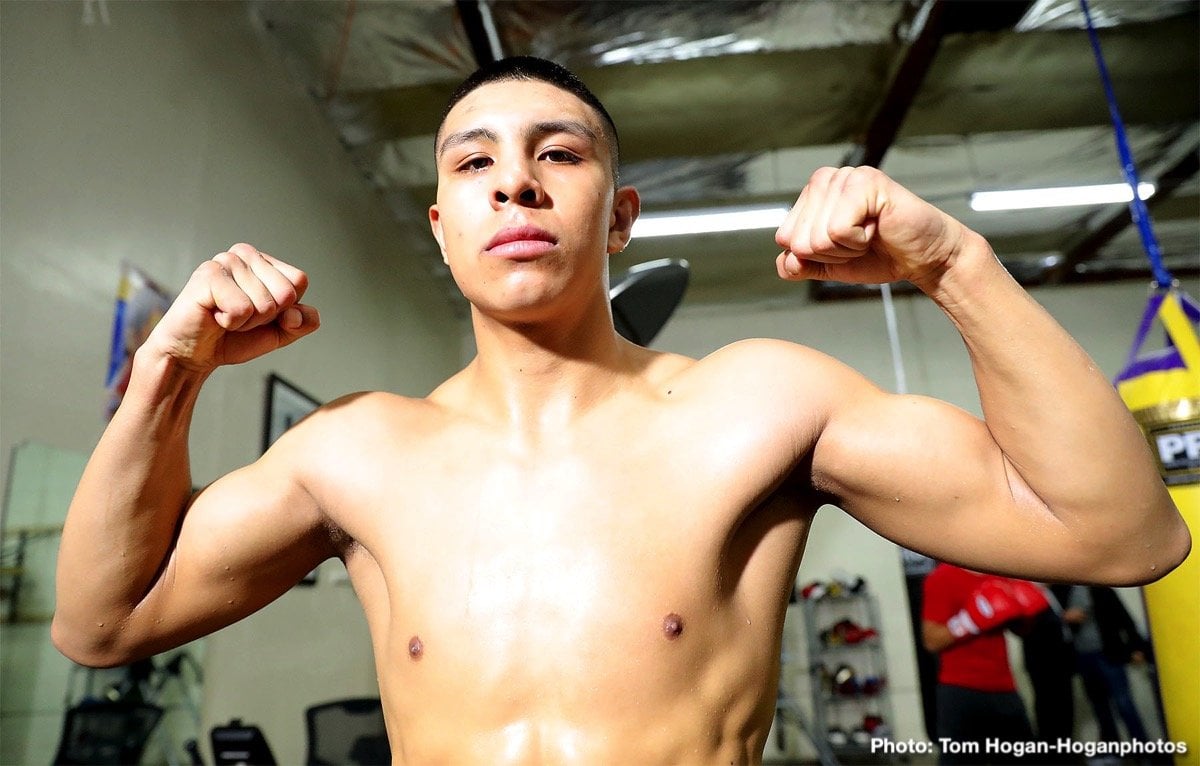 Jaime Munguia (31-0, 26 KOs) discussed his busy plans for 2019 as he prepares to defend his WBO Junior Middleweight World Title against Japanese contender Takeshi Inoue (13-0-1, 7 KOs) in a 12-round battle. The action will take place on Saturday, Jan. 26 at the Toyota Center in Houston, Texas and will be streamed live on DAZN – which is just $9.99 per month after a one-month free trial. Fans in Houston can purchase tickets starting at just $25 at ToyotaCenter.com.

The native of Tijuana, Baja California, Mexico is working hard to make a successful third defense of his title in what will be his debut in Texas. Munguia is working under the expert tutelage of renowned trainer Robert Alcazar, who trained the likes of Oscar De La Hoya, Edwin Valero and Jessie Vargas. Munguia is training in the Southern California area, where he combines a morning run at the mountains with an intense boxing session at a private gym in the afternoon.

Below is what Jaime Munguia had to say during a recent training session:

“We are preparing very well. I feel better and more motivated than ever before.
I’m stronger than ever, and I will do my best to give the best fights for the people on this new platform, DAZN.”

“I have worked hard to be in the main events like this. I think for me this is just the start. I want to make history. I was happy to be the co-main event of Canelo vs. GGG 2, and now that I’m headlining this event, I am more motivated.”

“After this fight, it looks like I will have a WBO mandatory bout against Dennis Hogan. But I would still like to unify the titles at 154 pounds with the other champions. We will resolve anything that is put in front of us.”

“The plan is to move up to 160 pounds in about a year. We’re fine making weight now. I have no problems, but I feel I can move up and fight in other divisions. My body is such that I could even go up to 168 pounds.”

Munguia on the other fighters in his division:

“I thought the fight was a draw [regarding Jermell Charlo vs. Tony Harrison]. Charlo should have attacked more and not wait as much. That’s my opinion of the fight. Tony Harrison is a good fighter. He’s tough and has good skills. If he is put in front of us-or anyone for that matter-we will have to work.”

“[Jarrett] Hurd is a very big 154-pounder. I think he’s bigger than me. If a fight with him is presented to me, why not? We can unify the tittles or meet at 160 pounds.”

“I don’t know what to say about the political situation because we are on different platforms. We will see if a fight against them can happen. Perhaps not this year, but maybe we can meet them at 160 pounds.

“I’ve heard the things they’ve said about me. Maybe they don’t respect me or think I’m too young. They’ve said a lot. I will make them respect me on the day they step in the ring with me.”

Munguia on a potential fight against Canelo:

“I don’t think there is any pressure with being mentioned with names like Canelo and Golovkin. I like this. It’s fun. I’m happy to be in fights like this and to see that we are advancing. So, the truth is we are happy.

“I am conscious of what I am doing. I think I can move up to 160 pounds and fight any of the two. It’s a risk because there will always be risks. Those are the two best fighters in the world. We would have to be very careful and come very well prepared. I don’t think it would happen soon, so we have to see what the future holds for us.” 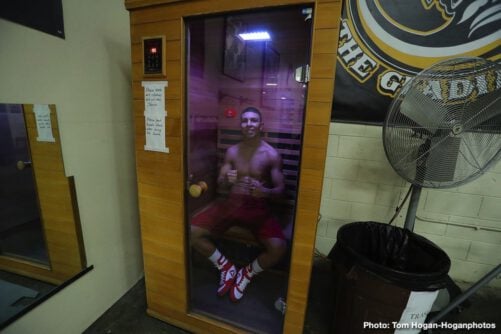 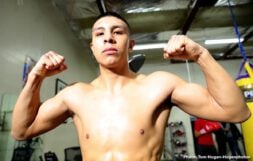 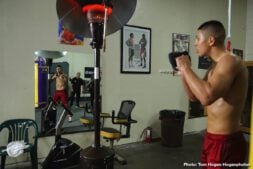 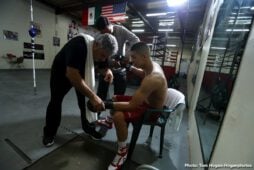 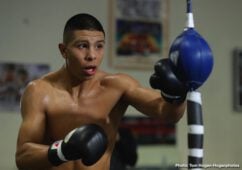 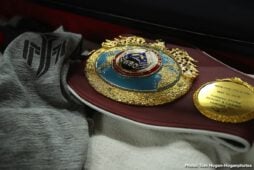 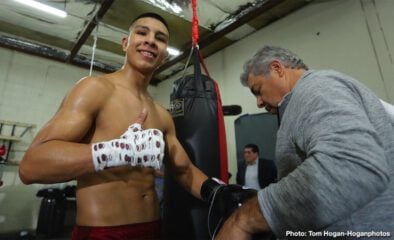 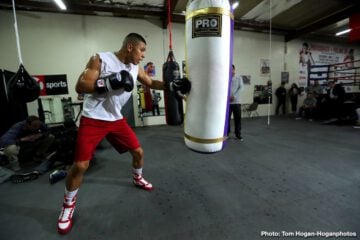 Jaime Munguia (31-0, 26 KOs) will headline the first Golden Boy Promotions event on DAZN in 2019 as he defends his WBO Junior Middleweight World Title against Japanese contender Takeshi Inoue (13-0-1, 7 KOs) in a 12-round battle. The action will take place on Saturday, Jan. 26 at the Toyota Center in Houston, Texas and will be streamed live on DAZN – which is just $9.99 per month after a one-month free trial.

“Our new partnership with DAZN is groundbreaking in this new era of boxing and sports streaming; fans subscribed to DAZN will constantly get high-level action at a single affordable price,” said Oscar De La Hoya, Chairman and CEO of Golden Boy Promotions. “Jaime Munguia’s stock rose as he headlined three of our cards last year, and he will only become an even bigger star because he is planning for a very busy 2019 on DAZN. This event will also showcase some of our best talent as we continue to build the next generation of main event fighters.”

Munguia is a 22-year-old champion of Tijuana, Mexico who catapulted to the highest levels of the 154-pound division by knocking out Sadam “World Kid” Ali in May to capture the WBO Junior Middleweight World Title. Munguia then defeated Liam “Beefy” Smith via 12-round unanimous decision in July and completed a spectacular year with a third-round knockout win over Brandon “Bad Boy” Cook in the co-main event of Canelo vs. GGG 2. Munguia will embark on yet another busy year by defending his title for a third time in January.

“I’m thankful and happy with how my career went in 2018, but I’m hungrier and more excited than ever,” said Jaime Munguia. “I want to prove myself against the best. Takeshi Inoue is a warrior. Japanese fighters leave everything in the ring, and Inoue is no exception. His style will complement mine and will make for a great fight. I will put on a show for all my fans and thank you again for all your support.”

Inoue is a 29-year-old native of Japan who will make his debut in the United States in only his second fight outside of his native country. Inoue is ranked No. 3 by the WBO and is coming off a unanimous decision win against former regional titleholder Yuki Nonaka.

“I am pleased to be able to challenge for a world title. It is a dream come true,” said Takeshi Inoue. “I have experience fighting abroad, and I am excited and confident that I will win this fight. Munguia is a powerful fighter with heavy hands, endurance and technique. To prepare for a fighter like this, I have trained hard and in depth on technique and endurance. I have sparred long, hard rounds, so that I will be able to win even if it goes to a decision. I am highly motivated and mentally focused. Boxing fans can expect a great fight.”

“This Jan. 26, Jaime Munguia will once again put on a display of skill and power against Japanese warrior Takeshi Inoue in a fight between undefeated boxers,” said Fernando Beltran, CEO of Zanfer Promotions. “To have a fighter of the caliber of Jaime Munguia is a breath of fresh air for the world of boxing. He is ready to be recognized as the best super welterweight in the world and to defeat anyone in his path to achieve this. It is an honor for Zanfer to have a strategic alliance with Golden Boy Promotions to continue to build Jaime’s career. It will be an unforgettable one, and I invite everyone to watch him on DAZN.”

In the co-main event, Jesus Rojas (26-2-2, 19 KOs) of Caguas, Puerto Rico will defend his WBA Featherweight World Championship against Chinese contender Xu Can (10-0, 1 KO) in a 12-round clash.

The undercard for this event will feature several fighters from the Golden Boy Promotions stable, including three fighters who call Texas their home. They say everything is bigger in Texas, so we are making sure this undercard is huge as well.

Joshua “The Professor” Franco (14-1-1, 7 KOs) of San Antonio, Texas will seek to avenge his only loss against Argentine puncher Lucas Fernandez (12-2-1, 9 KOs) in a 10-round fight for the vacant NABF Bantamweight Title.

Alberto “Impacto” Melian (3-0, 2 KOs), a former amateur standout who participated in the 2012 and 2016 Olympic Games, will make his United States debut after signing with Golden Boy Promotions. In only his third fight, Melian will compete for the vacant NABA Super Bantamweight Title in a 10-round battle against Edgar Ortega (10-1-2, 5 KOs) of Mexicali, Mexico.

Filipino contender Mercito “No Mercy” Gesta (32-2-2, 17 KOs) will defend his NABO Lightweight Title in a 10-round fight against a soon-to-be-announced opponent.

George Rincon (5-0, 2 KOs), the older brother of Alex who also hails from Dallas, Texas, will participate in a six-round super lightweight clash against Eduardo Reyes (9-15, 6 KOs) of Reynosa, Mexico.

James “The Beast” Wilson (7-0, 6 KOs) of Los Angeles, a quick-handed heavyweight prospect who has also fought as a mixed martial artist and a kickboxer, will compete against a soon-to-be announced opponent in his first six-round fight as an official member of the Golden Boy Promotions stable.

About DAZN:
Globally, DAZN is a live and on-demand sports streaming service created by fans, for fans, that is leading the charge to provide access to sports anytime, anywhere. DAZN guarantees no long-term contract, no bundles, just one affordable price for access to all the service’s sports on connected devices including smart TVs, smartphones, tablets, games consoles and PCs. DAZN is currently available in Germany, Austria, Switzerland, Japan, Canada, Italy and now the U.S. at just $9.99 per month after a one-month free trial – where it is becoming a must-have service for sports fans, with a daily show featuring live look-ins to Major League Baseball games beginning in 2019 and more than 100 fight nights already lined up from Matchroom Boxing, Bellator MMA, the World Boxing Super Series, Combate Americas and the recently announced Golden Boy Promotions.