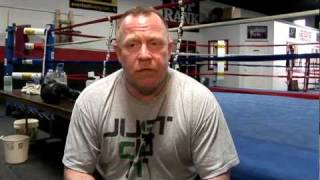 For those who are unaware, the city of Youngstown has a rich tradition of boxing royalty. Former world champions and contenders Ray Mancini, Jeff Lampkin, Greg Richardson, Ernie Shavers, Harry Arroyo, and most recently Kelly Pavlik, all called the city in the upper right hand corner of the buckeye state home. In the past few years however, things have quieted down around the rust belt. That is until last month, when Kelly Pavlik’s former trainer, Jack Loew, promoted an eight bout card at St. Lucy’s Palermo Hall. All fights where scheduled for four rounds, all local prospects making their pro debut. In the main event lightweight Alejandro Salinas made quick work of his opponent, dispatching Chris Tanner in the first round. “Salinas has what it takes to be great,” states Loew emphatically.

“It’s just a matter of time before he faces top opposition.” The crowd of over 1000 were entertained the entire evening, especially when local prospect John Gregory stepped in the ring. Gregory was not given a soft touch in his pro debut. “We matched him tough in his first pro fight,” states Loew. “The guy was a former golden gloves standout, but I told him to believe in himself, and he did.” Gregory came off the floor in the second to comeback in a wild shoot out to stop opponent DeLoren Gray Jordon in the fourth for fight of the night honors. Loew plans on running shows every 3-4 months, with the goal to consistently build up local talent.

“We have alot of talented fighters here, but the need to be put out there,” explains Loew. This wouldn’t be the first time a local fighter was brought up incrementally in front of his home town crowd. Both Pavlik and Mancini participated in a handful of local bouts before stepping on to the big stage. Hopefully Loew will not only be able to reinvigorate the Youngstown boxing crowd, but find it another future world champion as well.