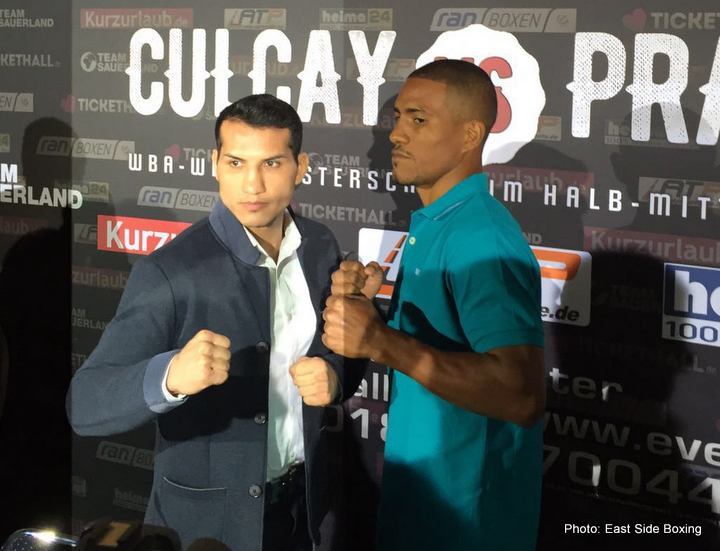 Culcay, a former amateur, European and interim World Champion, is confident he can claim World honours at the first time of asking. ‘’I have always dreamed of becoming a World Champion, and now my time has come,’’ said the 30 year-old.

Standing in his way is the Venezuelan southpaw Prada, who is predicting an early stoppage victory. ‘’He has many strengths but also many weaknesses. I believe I will stop him in the fourth-round,’’ he says.

Ahead of the WBA World Super Welterweight Championship contest we take a look at how the two fighters measure up with the Tale of the Tape. 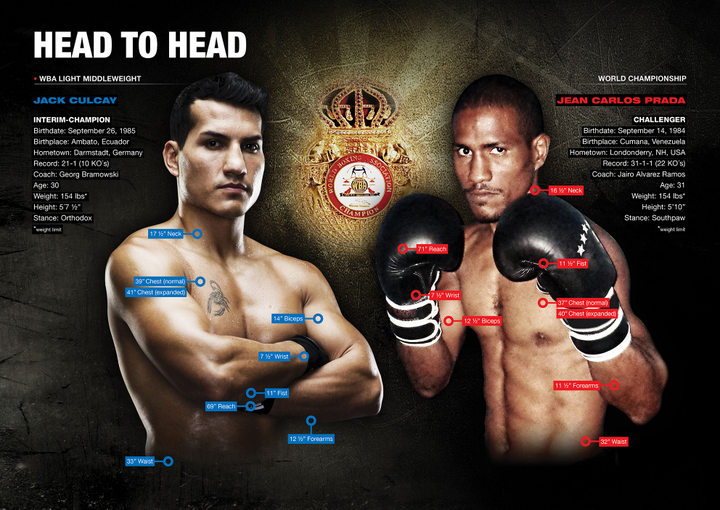 ‘’I have always dreamed of becoming a World Champion, and now my time has come,’’ said the 30 year-old. ‘’I have trained hard and I’m ready. Nothing will stop me from taking the title!’’

Culcay, a former amateur champion, lands his shot at World honours following a first defence of his interim World title against Dennis Hogan on December 5 at the Inselparkhalle in Hamburg. Now, he must overcome the tough Venezuelan southpaw Prada in order to claim the coveted WBA World title.

‘’I have studied Culcay and I know what I must do to win,’’ says Prada, who has predicted an early stoppage victory. ‘’He has many strengths but also many weaknesses. I believe I will stop him in the fourth-round.’’

Said promoter Kalle Sauerland: ‘’This is a chance for Jack to establish himself as one of the best super welterweights in the World. He is a former amateur World Champion and now he can achieve the same feat as a professional. It will be an exciting contest and one fitting of it’s World Championship status.’’

The WBA World title fight will be preceded by a special ten-bell salute to honour the passing of WBA President Emeritus Gilberto Mendoza, who sadly passed away at the age of 72 years on March 11. ‘’We hope this provides a fitting tribute, in front of millions of television viewers, to a truly great boxing man who will be missed my many,’’ said Sauerland.

On the undercard, Tyron Zeuge (17-0, 10 KOs) takes on Ruben Eduardo Acosta (31-13-5, 11 KOs) in a ten-round super middleweight contest. It will be the Berlin-boxer’s first fight with new coach, WBA World Light Heavyweight Champion, Juergen Braehmer in his corner. Enrico Koelling (20-1, 6 KOs) is back on the title trail as he challenges Oleksandr Cherviak (15-5-1, 5 KOs) for the WBA Intercontinental Light Heavyweight title.