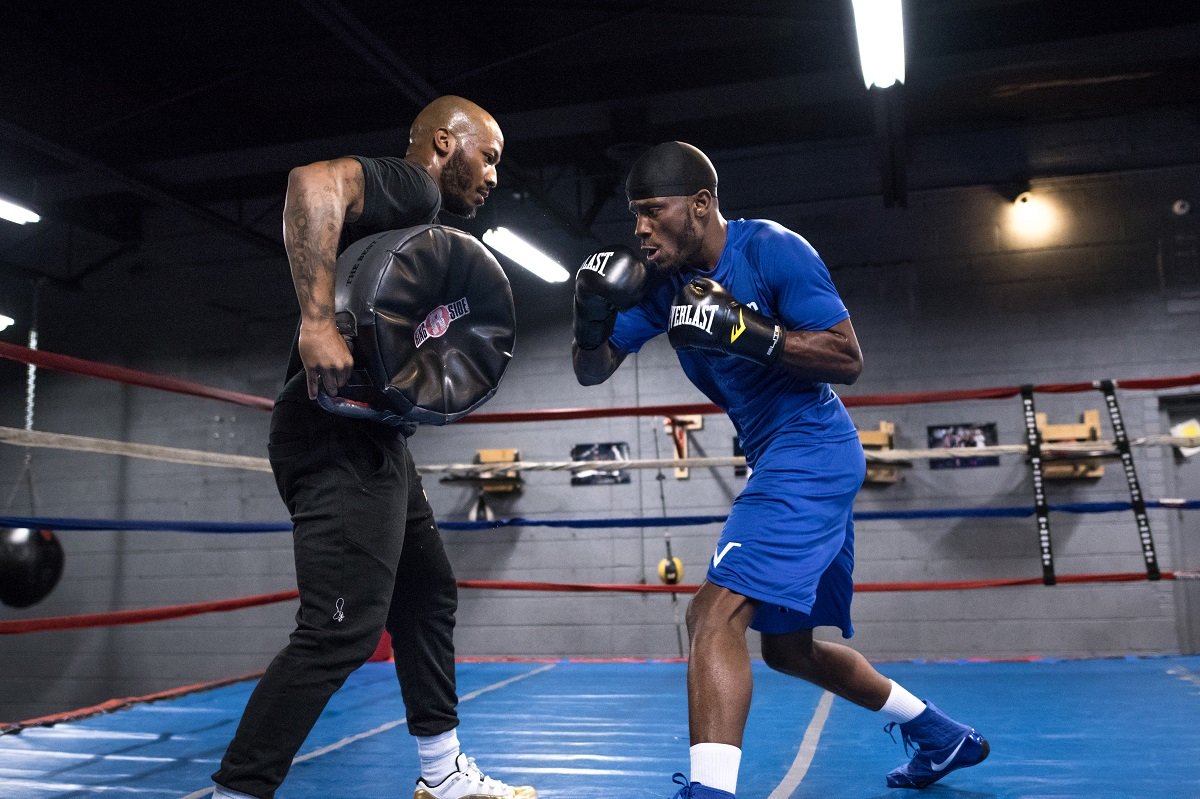 Former world champion Ishe Smith and 154-pound contender Tony Harrison spoke about their respective training camps and upcoming matchup just over a week before they square off in the Premier Boxing Champions on Bounce main event Friday, May 11 from Sam’s Town in Las Vegas.

Tickets for the event, which is being promoted by Mayweather Promotions, begin at $25, are on sale now and will be available at www.samstownlv.com/entertain.

Smith, a native of Las Vegas fighting in his hometown, shared thoughts on his training camp at the Mayweather Boxing Club while Harrison, a former title challenger, gave insight into the work he’s put in at the Superbad Gym in Detroit.

Here is what the fighters had to say:

What kind of problems does your opponent pose?

Ishe Smith: “I look at all of my opponents the same honestly. Tony is a good kid and a good fighter who’s fought for a world title. He had a lot of hype behind him back in the day before suffering his first loss. I’ve been in this game for so long and sparred so many future and current Hall of Famers, I look at each opponent the same.

Tony Harrison: “I know that Ishe is a rugged fighter who likes to get inside, and that sometimes causes things like accidental head butts and also just makes for a grittier fight overall. He’s willing to dig deep and get muddy. He comes in with a lot of experience, which you can never take lightly.”

How do you expect this fight to look?

TH: “I’m just going for the win, but if I have a shot to stop him I’m going go for it. I want to be the first one to do what nobody else has been able to do, and that is stop Ishe Smith. I think doing that would put me right back in the conversation at the top of the division. But I’m just going in there to win by any means necessary against an experienced opponent.”

How has this training camp gone? Have you made any recent adjustments to your camp?

IS: “I’ve had a nearly 20-year career but until now, I’ve never had a strength and conditioning coach for two consecutive fights. Being able to stay with one guy for the Julian Williams fight and then having him again, that’s going to be key. It helped me last fight and it’s going to keep me going forward.”

TH: “This camp has been amazing. This has been the first camp that I’ve felt like I haven’t overdone it and run my body into the ground. I’ve always tried to go over and beyond what I’ve needed to do. This camp has just been more calculated and methodical. I’ve gotten rest when I needed it. I feel great.”

TH: “The atmosphere at the gym has been at a world championship level. My sparring partners have been a really versatile bunch of quality fighters. We’ve done work with U.S. Olympian Charles Conwell, Leon Lawson, William Williams, Lanardo Tyner, Antonio Urista and a couple others. I think we’ve covered just about whatever Ishe could throw at me on May 11.”

IS: “I’ve sparred everybody you can think, especially for this camp all of the guys on the Mayweather Promotions team. I’ve been sparring big guys, little guys and I’ve even joked with Andrew Tabiti about getting in there with me. I’m really having fun and enjoying my time in the gym.”

Do you think the 12-year age gap will make a difference in this fight? Why or why not?

IS: “Absolutely not. He’s been knocked out twice. I’ve never been stopped. I do a good job of ignoring the outside noise. Age is nothing but a number. It’s totally different when you’re actually in the ring with me. I’ve always been about challenging myself. I live a fighter’s life inside and outside of the ring. I’m set up to deal with anything that’s thrown my way in this game.”

TH: “I don’t really know how he lives his life, so I’m not really sure how his age may or may not play a factor. But I’ll be coming in at an aggressive pace, and then we’ll see how things play out. It’s a mystery for now though until we get in there and figure him out a bit. But he looked good and fresh against Julian Williams and Williams is one of the top guys in the division. So I think he’ll be confident coming off of that performance, but I’ll be ready for him.”

What kind of improvements have you made in recent fights and how will you implement that in the ring on May 11?

TH: “My main thing is my confidence. I don’t think anybody can beat me when I’m at the top of my game. When it’s fight time, I’m able to implement that and motivate myself. I know in my heart that these guys can’t beat me.”

IS: “I’ve been able to develop a really strong support system in my life that’s helped my career stay strong. By using that and treating my body well, I’ve been able to last. This recent work with a new strength and conditioning coach has really been a game changer and I think can take me to another level in this portion of my career.”

IS: “A win on May 11 is the only option. I want to have my hand raised at the end of the night. The win can mean a lot. Julian Williams was in a title eliminator after beating me, so I know anything is possible. I have to win. It just means everything to me. I’m never going to look past what’s on my plate. No dessert for me until I finish my dinner.”

TH: A win against Ishe would get me back to the truly meaningful fights, championship fights. I’d love another shot at a title holder like Jarrett Hurd. The goal is to get back to the top to face the best fighters in this stacked division.”

Premier Boxing Champions on Bounce will also be available to be streamed live via Bounce’s new subscription-video-on-demand service Brown Sugar, which features an extensive and one-of-a-kind library of iconic black movies as well as Bounce original programming and series. Brown Sugar is available on Apple TV, Roku, Amazon Channels, Amazon Fire TV, Amazon Kindle, Android and Apple smartphones and tablets and web browsers via BrownSugar.com. Brown Sugar also has Google Chromecast capabilities which allow video to play on televisions directly from mobile devices and tablets for consumers with Android and iOS devices. There is a free initial trial period for subscribers with a retail price of $3.99/month thereafter.

Bounce (@bouncetv) is the fastest-growing African-American network on television and airs on the broadcast signals of local television stations and corresponding cable carriage. The network features a programming mix of original and off-network series, theatrical motion pictures, specials, live sports and more. Bounce has grown to be available in 99 million homes across the United States and 95% of all African-American television homes. Visit BounceTV.com for more information.