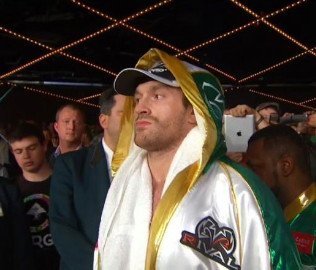 If he manages to upset the odds and dethrone long-time heavyweight champion Wladimir Klitschko in Germany next month, then Britain’s colourful 6ft 9″ challenger, Tyson Fury, says it will not be the realisation of a dream for him, merely the start of one, as he is in boxing to be the best fighter Britain has produced, and ultimately, to become a ‘superstar’.

“I aim for the stars and winning a world title will not be the fulfillment of a dream for me. It never has been,” Fury said to Sky Sports.

“I never started in boxing to be a British champion or a world champion. There are loads of world champions in Britain and if you mention them to someone out there on the street, nobody knows who they are.”

Over the years, the attention the marquee-division inevitably attracts, has brought household name recognition far beyond the in-ring talents of previous British heavyweights like Henry Cooper, Joe Bugner and Frank Bruno, and it’s a fame that Fury could seemingly grow used to, although – unlike Cooper and Bugner at least, he sees himself winning the world title.

“For me, it’s about being a star, being a superstar and not just winning a world title, but becoming the best ever British fighter this country has ever had. That’s what I am and that’s what I intend to do.”

While the “Marmite-like” Fury may be overstating the mark a ways about becoming “TBE” in British boxing, it is the kind of single-mindedness he is going to need if he is to beat the dominant Ukrainian champion, who last tasted a loss eleven long years ago.

What Fury does believe he has, is the experience of fighting his way into contention, rather than being given a leg-up, and handed shots he hadn’t earned, nd he thinks it will stand him in good stead.