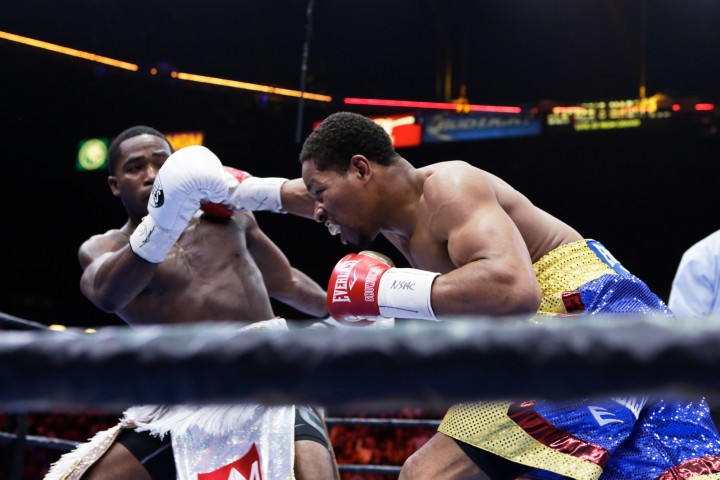 (Photo credit: Suzanne Teresa/Premier Boxing Champions) By Matthew Reyna: Even after another disappointing loss, Adrien “The Problem” Broner remained his polarizing self.

“This time I didn’t get the decision, but it’s OK,” Broner said. “At the end of the day, everybody in here will take my autograph and take my picture.”

The latter may be true, but his career has reached a crossroads. After another tough loss, questions are being raised about his dedication and accomplishments.

Broner, 25, is falling out of favor in the boxing world as quickly as he once climbed up the rankings.

Pundits are now questioning the quality of Broner’s wins. His resume has been a target of the boxing world in the aftermath of his unanimous defeat to fellow Ohioan Shawn Porter of Akron.

The most notable victories of Broner’s career came against Antonio DeMarco, Gavin Rees and Paulie Malignaggi. A list of fighters that most contenders at welterweight would be favored to beat.

“Broner’s name should never be included in the same sentence as the word great, because despite his championships and impressive record, he’s far from great,” said Yahoo! Boxing writer Kevin Iole.

Broner reverted to familiar bad habits on Saturday night. The jab he used to dominate John Molina was absent against Porter. CompuBox credited the Cincinnati native with landing only 20 jabs over 12 rounds.

He fought lazily in the early rounds and showed no urgency until knocking down Porter in the twelfth round.

The rounds he gave away against Emmanuel Taylor and Carlos Molina could be recovered, but against a world-class fighter like Porter he could never get back in the match.

If Broner is going to return stronger he needs to be matched carefully, at least in the beginning stages of a comeback. He needs to re-evaluate his training, weight class and future opponents.

With a record of 30-2 and a marketable name, Broner can still get more out of his career. However, he needs to repair his reputation in the ring.
The fights desired by Broner before losing to Porter included Amir Khan, Danny Garcia and a rematch with Marcos Maidana. All three would be heavy favorites to beat him at welterweight.

He would be doing himself a favor by moving back down to junior welterweight. Even boxing at lightweight is more plausible than welterweight for Broner. Some fans may scoff at that notion, but that is the division where he built a marketable brand and won his biggest fights.

His once highly regarded power may also return at lightweight. Since June 2013, fighting above the lightweight limit of 135, Broner has a pedestrian record of 4-2, with no knockouts. At lightweight, Broner is 15-0, with 13 knockouts, including the stoppage victories over DeMarco and Rees.

Broner should look to secure safe fights that strengthen his weak resume. He will not find many of these fights at welterweight.

Fans will not continue to watch Broner fight unproven opponents, such as the competition he faced between losing to Maidana and Porter. He needs a big name, if not a big challenge.

Recent fights have shown that Broner has problems against pressure fighters with power. His advisers would be wise to keep him away from the likes of Lucas Matthysse and Ruslan Provodnikov.

There are plenty of realistic options at lightweight and junior welterweight for Broner to choose.

In the junior welterweight division, Humberto Soto (WBC #7, IBF #7) and Raymundo Beltran (WBO #4) are both pressure fighters, but at an advanced age and with less power than Porter and Maidana.

Broner’s speed and skill would make him a favorite over both men. Both have been out boxed before by superior tacticians. They represent relatively safe fights that would improve the quality of his record.

If he drops back down to lightweight, Broner would be a prohibitive favorite over all of the current titleholders.

Jorge Linares, the most skilled of the three champions, has been knocked out in all three of his losses, including an 11th round TKO defeat to former Broner victim Antonio DeMarco.

Broner versus Linares is an easy sell, as well as an intriguing contest. Broner’s power gives him a potential advantage over Linares, the WBC lightweight champion.

Cleveland’s Mickey Bey is the IBF lightweight champion and Darleys Perez is the WBA champion of the division.

Both men have failed to impress against their best competition and are relatively unproven at the world level. They would be heavy underdogs against Broner.

The loss to Porter hurts Broner’s credibility at the world level, but there is plenty of opportunity at the lower weight classes to change the perception.

A return to prominence for the “Can Man” could be closer than some expect.

The fans might still take his autograph and picture, but they will stop crowding arenas to see him if his winning percentage fails to match his bravado.