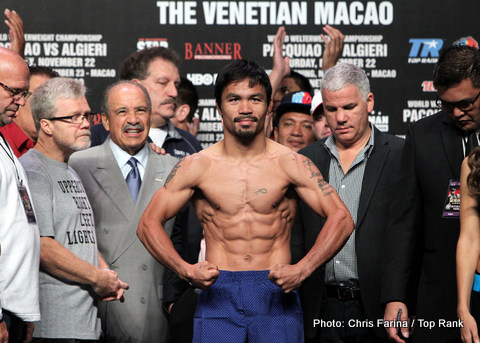 Memories can produce untrustworthy flashes of the past and the memories of sports fans often exist as disjointed strands of pain and joy forcing us to remember and forget merely out of service to our own emotions. Unlike other sports, boxing does not rely upon the same meticulous examination of statistics. It’s not a numbers games the same that way baseball, basketball and football are.

What happens inside the ring is more anecdotal, a bloody story retold over and over again until the memory becomes a fragmented version of its original narrative.

Since and including his fight with Oscar De La Hoya, Manny Pacquiao has knocked exactly one of his opponents out cold. Each and every other win, save for his clash with Miguel Cotto in 2009, has gone the distance. His beat-down of Antonio Margarito, his one-sided battering of Joshua Clottey, and his fights with Mosley, Rios and Bradley all went 12 rounds.

In boxing there are K.O.’s, there are T.K.O.’s and there are decisions. But rarely do those results encapsulate the true nature of a win. Knockouts imply a loss of consciousness – knocked out cold – but how often is a fighter truly separated from their senses to that extreme? Technical Knockouts have a sort of conciliatory feel to them. If someone were conceding a point in a debate he or she might say, “Yeah, I guess he was technically knocked out.” And W-UD and RTDs do nothing to spotlight the anguish that two fighters might have struggled through for the win. The finality of the category almost negates the process through which it was achieved.

This is boxing’s system and I don’t think there’s anything wrong with it. But a small, albeit annoying problem arises when we take the misrepresentations of a fighter’s record as exaggerated truths.

Again, Pacquiao has knocked out exactly one opponent since his meteoric rise to superstardom, which is typically marked by his drubbing of De La Hoya six years ago. Why then are the few media outlets left that actually report on boxing perpetuating this nonsensical story about his waning power? The fights where the majority of Pacquiao’s K.O.s took place were in much lighter divisions. Once he rose in weight and increased his quality of opposition in those divisions, the frequency of his knockouts diminished.

What does this mean for his upcoming fight with Chris Algieri? It means that when judging Pacquiao’s last two fights against those he had with Hatton, Cotto and so on, there is nothing to suggest that he is any different than he was before the knockout loss to Marquez. He bulldozes through traditional, come forward fighters and while having more difficulty with slick counter punchers he is still able to win (save from one glaring contradiction to that point). Algieri has a good jab and an educated right hand, but will those things be effective enough to keep Pacquiao at bay? Can Algieri hurt Pacquiao, or rather the better question is, will Algieri hurt Pacquiao? My guess is no. I see Pacquiao avoiding the jab, double stepping his way inside and peppering Algieri with a flurry of combinations before slipping underneath a counter shot to safety. I like Algieri, but I don’t think he is experienced or skilled enough to stave off Pacquiao’s inevitable rush of activity. Watch for Manny to stop Algieri via T.K.O. in the 8th or 9th round, and if he does then perhaps it will restore some of the enthusiasm and confidence of the viewing public who have been so quick to forget the nature of many of Pacquiao’s greatest wins.