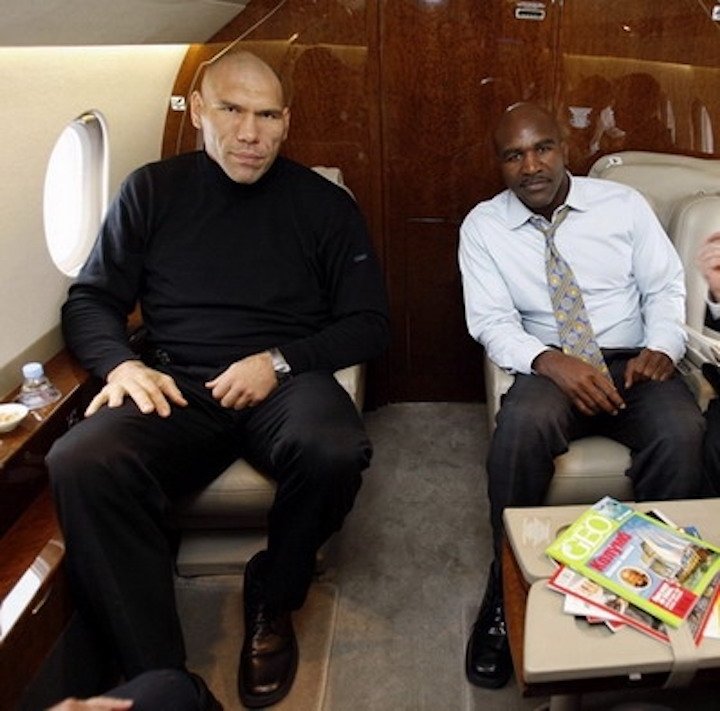 This one was just bad. Rewind to just before Christmas in 2008, and heavyweight legend Evander Holyfield was denied an even loftier place in boxing history – that of becoming the only man to have ruled as heavyweight champ FIVE times. 46-year-old Holyfield, way past his best – to the extent that fans everywhere had been all but begging him to retire, this after humbling losses to Chris Byrd, James Toney (by TKO), Larry Donald and, in his most recent fight, Sultan Ibragimov – got an undeserved shot at regaining the WBA heavyweight belt.

Holyfield faced giant Nikolai Valuev, the towering, 7’0” Russian having made some boxing history of his own: that of becoming the tallest heavyweight champion ever. But Valuev might also have been the slowest, most immobile heavyweight in history. Valuev had a decent left jab and he was physically strong, but he had slow hands with no real snap on his punches. Basically, Valuev’s biggest asset was, well, his bigness.

Valuev had been WBA heavyweight champ since 2005, having lost it to Ruslan Chagaev in 2007 and then regaining it by beating John Ruiz in a rematch for the vacant strap in 2008. Against Holyfield, Valuev would be having his seventh world title fight. The fight took place in Zurich, Switzerland and Valuev was a whopping, great 10 to 1 favorite. Many millions of fans tuned in to watch via Das Erste. 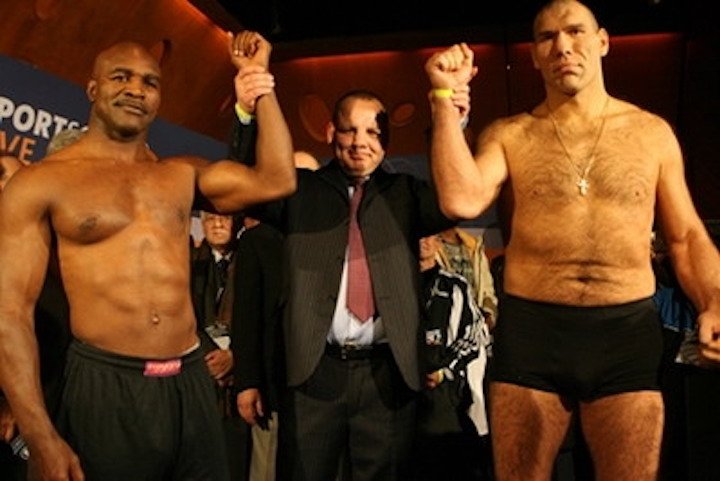 What these fans saw was one of the most boring, drama-free heavyweight titles fights in history. At the end of the 12 rounds, fans also witnessed one of the worst robberies in heavyweight history. Holyfield, adopting a smart and effective approach, had boxed on his toes at range, then moved in to land a quick combination, before getting back out of range. Valuev, who, “fought as if he was in a coma all night long,” according to Dan Rafael, was unable to do anything to stop Holyfield from piling up points.

Never once was Holyfield hurt, his basic boxing allowing him to outmanoeuvre Valuev with no real fear of any consequence. At the final bell it looked to almost everyone that Valuev’s second reign would end and Holyfield’s fifth reign would begin. Instead, in a decision that ranks right up there with the memorably controversial ones – Joe Louis-Joe Walcott-One, Muhammad Ali-Jimmy Young, Ali-Ken Norton-Three, Lennox Lewis D12 Evander Holyfield – Valuev escaped with a majority decision victory.

Strangely there was far too little outrage in the US than there should have been. Perhaps the fight was so dull the fans simply didn’t care. But this does not take away from the fact that Holyfield, the only four-time heavyweight king, should today have FIVE belts in his trophy cabinet. Again, the fight from 12 years ago today was no classic, and Holyfield’s performance wasn’t too special either (Valuev, with his complete lack of speed, made Holyfield look far better than he was at almost 50 years of age). But Holyfield won. He was robbed. He should have left Switzerland with the WBA heavyweight belt.

Valuev fought just once more, against another former cruiserweight champion in David Haye. Haye had obviously seen the Holyfield fight, as in November of 2009 he emulated Holyfield’s performance and boxed Valuev for 12 rounds. Haye did close the show in memorable style, wobbling the giant in dramatic style in the final round (breaking his hand in the process), but Holyfield must have been angered at the praise and respect Haye got after picking up the majority decision that went his way.

Holyfield, at age 46, had already done what Haye managed, although not officially. And nobody cared. This particular heavyweight legend deserved better.

Has Teofimo Lopez Got A “Suspect Chin?”
Follow @eastsideboxing