Last night in Kinshasha (scene of course of the legendary Ali-Foreman “Rumble In The Jungle”) Ilunga Makabu successfully defended his WBC cruiserweight title with a 7th round TKO over an extremely game and determined Olanrewaju Durodola. The end came when southpaw Makabu drilled Makabu with a big left hand to the head that dropped the challenger heavily in a corner. Durodola beat the count but the referee decided he’d had enough. Makabu is now 28-2(25). Durodola drops to 34-8(31).

It was a wholly enjoyable action fight right from the start, with 40 year old Durodola, knowing this would almost certainly be his last chance at the big time, coming out and throwing everything he had at the champion. Makabu, who just might be the most consistently exciting cruiserweight out there today, had to rely on the strength of his chin numerous times, yet he was also throwing back. Makabu was the better punch-picker, the man who was able to pace himself. 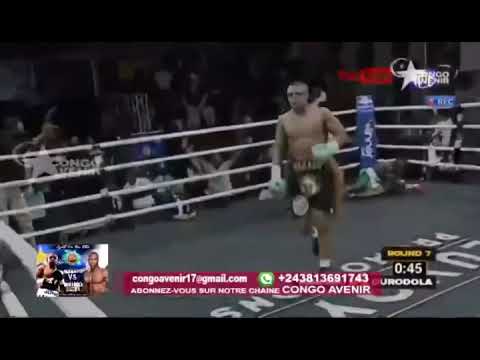 Durodola was soon showing fatigue, no wonder considering his punch output (and his age). There was no let-up, with both guys banging away. Durodola’s left eye was marking up by the middle rounds and he was open-mouthed. Still the gruelling battle raged on, with the passionate crowd loving every minute of it. Then, in the seventh, tape coming loose from his left glove, Durodola was drained completely by the big left hand from 33 year old Makabu.

This was an excellent fight, between two men who, though never likely to be big stars, always give everything they have when they step between the ropes. It’s tough to see where Durodola goes from here, the man from Nigeria now having been stopped some six times. Makabu of the Democratic Republic Of The Congo can look forward to bigger fights. It will be interesting to see what Makabu does next. Having given us thrillers against the likes of Thabiso Mchunu, Dmitry Kudryashov and now Durodola, this all-action warrior deserves a big fight and an equally big payday.

Makabu closed out a strong 2020 with last night’s win, having won the WBC title with a decision win over Michal Cieslak in January.