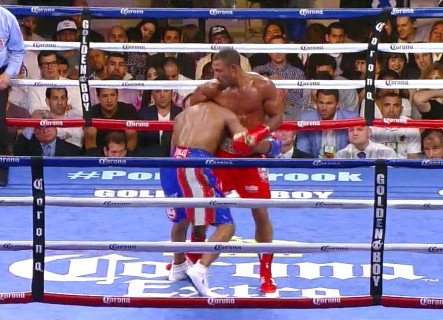 For a Khan-Brook fight to do really well in terms of attracting fans, Brook needs one more significant win to show fans that he’s for real before a Khan-Brook fight could be on the level of a Carl Froch vs. George Groves II fight. Brook’s win over Shawn Porter last Saturday wasn’t really that pretty to watch due to Brooks clinching.

Brook was landing 2-3 good shots per round and holding the rest of the time. Brook won but it wasn’t a real conclusive result because he was outworked in every round and the judges scored the fight based on Brook’s fewer but harder shots rather than high volume of punches that Porter landed. Brook should take on a top 5 welterweight next like Keith Thurman and show whether he can beat a guy like that before he and his promoter Hearn start talking Khan.

“If everyone sits down and realizes this is a great fight for Britain,” Hearn said via Skysports.com. “There’s a lot of money to be made for both fighters. We saw what happened between Carl Froch and George Groves at Wembley and we can do something like that again.”

I believe Khan will have little problems beating Brook. Khan is much faster, a good mover, and he’s not easy to hit frequently. If Brook’s entire game is to land 3-5 good shots per round, he’s going to lose badly because Khan is going to hit him many more times than that. At the same time, Brook is going to have a hard time landing more than 1 shot at a time because Khan doesn’t standstill for very well.

Hearn should think about moving Brook in another direction if he wants to keep him as the IBF champion for as long as possible. What he should do is build up to the Khan fight after taking a number of other title defenses first. So by the time that Hearn does match Brook against Khan, it’ll be a far bigger fight, and Brook can then cash out with the fight with a retirement payday.