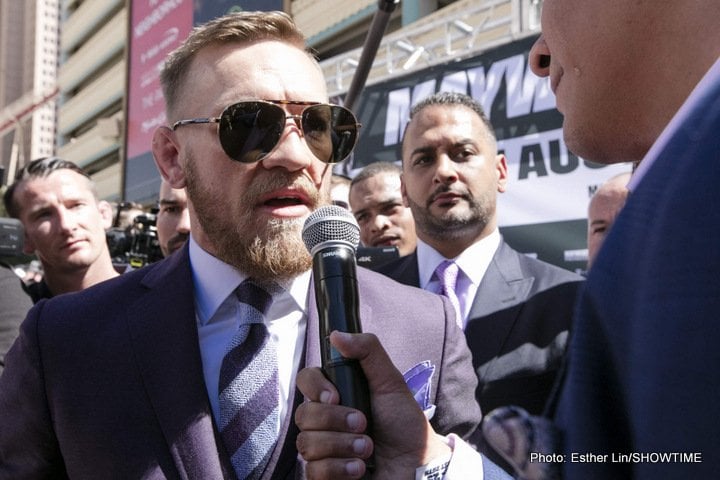 Speaking to IFL TV, Hearn says he’s had a conversation with McGregor’s team about a boxing match between Paulie Malignaggi and Conor McGregor on DAZN. Malignggi will likely jump at the chance of facing Conor inside the ring so that he can give him a boxing lesson he won’t soon forget.

Hearn needs to be talking to UFC president Dana White first before he starts thinking of putting McGregor in with Malignaggi. It would be a good fight, but there’s a very real potential that McGregor’s popularity will be eroded if he loses to Malignaggi. As long as McGregor’s contract with the UFC allows him to box as fight in the octagon, he should be able to fight Malignaggi. It doesn’t look like Khabib Nurmagomedov is able to do both judging by the comments that White made recently about Floyd Mayweather Jr. only having the option of fighting Khabib in the octagon rather than the boxing ring.

McGregor, 30, lost to Floyd Mayweather Jr. in a mega-fight in Las Vegas in August of last year, and he’s been eager for a second fight against Floyd. Unfortunately, Mayweather hasn’t been in a hurry to get back in the ring against anyone. As such, a fight against the 38-year-old retired Malignaggi might make due.

McGregor vs. Malingaggi likely won’t attract a huge amount of attention from the casual boxing fans in the U.S, but the hardcore fans will show interest in seeing it on DAZN. It’s good simple entertainment. The question is does Malignaggi still have enough left to outbox and untrained fighter like McGregor. We all know that McGregor is an excellent MMA fighter, but he looked out of his league last year against Mayweather. In fact, Mayweather looked like he was fighitng n 1st gear the entire fight, even in the 10th.

Malignaggi hasn’t fought since last year in getting stopped in the 8th round by British fighter Sam Eggington. Malignaggi had his moments in the fight, but he ran out gas and ended up being stopped. There’s no shame in Malignaggi losing to a fighter like that. Eggington would likely beat McGregor.

McGregor returned to the octagon recently in losing to Khabib by a 4th round tap out at UFC 229 on October 6.