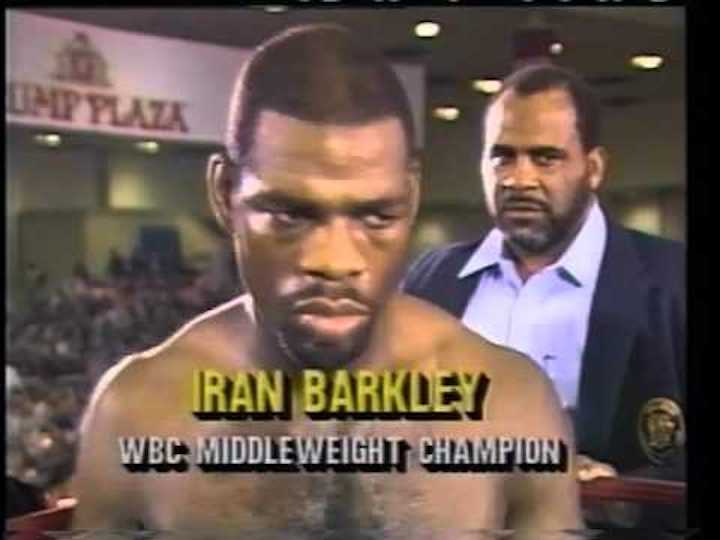 One of the most consistently thrilling middleweight/super-middleweights of the 1980s and ’90s, Iran Barkley had some amazing roller-coaster of a career. Born in the tough and mean streets of The Bronx 60 years ago today, Barkley would run in a street gang in his youth – the Black Spades also having Mitch “Blood” Green as a member – before boxing saved his life.

A good amateur who was initially taught to box by his sister, Barkley would win a silver medal at the 1981 New York Golden Gloves, and a gold at the Empire State Games that same year. Turning pro in December of 1982, Barkley, soon becoming famously known as “The Blade,” this perhaps the scariest nickname in middleweight history (you can guess how Barkley got his sobriquet), won his first four, before losing a split decision to Osley Silas over six rounds.

Then, in January of 1984, Barkley fought his first memorable war. Facing Marvin Hagler’s half-brother Robbie Simms, Barkley was stopped in the sixth round of a wild affair. The kill or be killed approach Barkley had shown would be repeated numerous time throughout his blood and guts career.

Fury vs. Wilder 3: Does Tyson still have the hunger?

A big middleweight, Barkley had skills but he was often dragged into a street fight type battle, his chin tested severely. Barkley could be outboxed, as he was by Eddie Hall, who inflicted Barkley’s third pro loss via eight round split decision three fights after the Simms defeat. But it would be 13 more fights before Barkley would lose again.

Wins over Silas, (TKO6 in a revenge meeting), Wilford Scypion (KO8), James Kinchen (WS10) and Jorge Amparo (a ten round UD that was far closer than the judges had it, Barkley hit plenty and busted up by the vastly underrated Amparo) saw Barkley earn a shot at the vacant WBA title. Facing the classy Sumbu Kalambay in Italy, Barkley was too raw, too green to be able to cope with Kalambay’s skills and finesse; Barkley losing a unanimous decision over 15 rounds.

Regrouping from the loss and now 22-4, “The Blade” would go on to star in his most celebrated action fights. After a close decision win over the tough and tricky Sanderline Williams (yet another underrated boxer), Barkley would blast his way to victory over Michael Olajide in a fan-friendly shootout at The Felt Forum. And then Barkley got his second shot at glory. Enter the legendary Thomas Hearns.

For two-and-a-half rounds, Barkley took one helluva pasting in Las Vegas. Cut badly above both eyes and being almost bent in half by Hearns’ wicked body shots, Barkley seemed to be on the verge of being stopped, maybe rescued by the referee. Then, in the third, Barkley uncorked a smashing right hand that landed flush on the defending WBC champ’s exposed jaw. Barkley cracked a falling Hearns with another right hand and the title was his. Hearns did get back up, quite incredibly, but he was gone and Barkley’s follow-up attack sent him through the ropes.

Barkley, who came out with the great line, “I didn’t have time to bleed” after having won the title, was king at last. Though his reign proved short-lived – Barkley losing to the one and only Roberto Duran in his first defence – “The Blade” had made his mark on the sport in a big way. The Hearns KO was given The Upset of The Year award, while the 12 round classic with Duran was for many people the 1989 Fight of The Year.

39 Years Ago: Holmes Vs. Cooney – The Fight That Came A Year Too Early For Gentleman Gerry

Barkley dropped a split decision to Duran but both men played their part in a modern day classic. To this day, Barkley insists he won the fight.

Things went downhill for Barkley after the loss to “Hands of Stone.” A close loss to Michael Nunn saw Barkley fail to win the IBF title (“he hit like a flower,” Barkley said of Nunn afterwards), while retinal trouble then kept Barkley out of action for a year. When he did return (too soon, after undergoing eye surgery and not having had a needed tune-up) Barkley was stopped in a round by Nigel Benn in a savage three minutes that saw both men hurt. Benn belted Barkley while he was down but no time-out was called. Barkley couldn’t seem to get a break.

But then he did get one.

In an amazing comeback, Barkley smashed clean through Darrin Van Horn to take the IBF 168 pound title in January of 1992. Now a two-weight ruler, Barkley immediately called out Hearns. Hearns had just won the WBA light-heavyweight crown and now Barkley challenged him for it. This time the two fought a fierce 12 round war that in effect finished both men. Hearns was put down in the fourth and his nose was almost totally flattened at the end. Barkley was banged up too. This one was just brutal.

But Barkley, courtesy of the split decision win he was awarded, was now a three-weight champion. Also, he was, and is, the only man to have twice beaten Hearns. A big-money fight with James Toney followed (Barkley’s biggest career payday) but a weight drained Barkley was no match for the peak Toney; “The Blade” being battered for nine wholly one-sided sessions.

And that should really have been it for Barkley. His eyesight in question, the hard, hard fights having caught up with him, the scar tissue around his eyes regularly opening up in fights, the 32 year old was now blunted. Sadly, money issues forcing him on, Barkley fought until he was 39, finally retiring (but still harboring ideas of fighting to this day) in 1999. By then, Barkley was 43-19(27).

At his best, however, when he was full of fire, Barkley was one incredibly tough and dangerous fighting man. Barkley might have lost too many fights at the end, along with pretty much all his money, but those special wins over Hearns, Van Horn and Olajide can never be taken away from him.