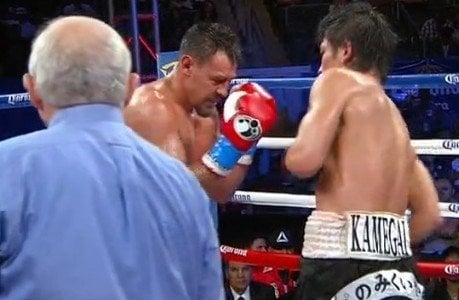 Former two division world champ Robert Guerrero (32-2-1, 18 KO’s) may have misjudged the talent of his opponent Yoshihiro Kamegai (24-2-1, 21 KO’s) tonight because he took a real beating from the Japanese fighter in winning a 12 round unanimous decision on Golden Boy Promotions’ card at the StubHub Center in Carson, California.

Guerrero was hit with a great deal of very, very hard head shots in the fight by the fringe contender Kamegai. As a result of all the punches to the head that Guerrero took, he ended up with a badly swollen eye that was closed from the 9th round on.

For the most part, Guerrero dominated each round with his higher punch output and in many cases cleaner landing shots. But the problem was Kamegai was really nailing Guerrero with at least 6-10 hard shots in each round, and his punches did damage to Guerrero’s eye. Kamegai also landed a lot of powerful body shots that clearly bothered Guerrero.

In many of the round, Kamegai was able to back Guerrero up against the ropes and work him over with big power shots to the head and body. And while Guerrero get the better of the action even then, he was getting punished by Kamegai’s harder landing shots.

As good as this fight was, it would be interesting to see these two warriors do it again. That’s obviously not going to happen because Guerrero wants a big fight against Floyd Mayweather Jr again. But that that’s not going to happen either, and soon as Guerrero realizes that the better off he’ll be.

Guerrero didn’t say who he wants to fight next when interviewed after the fight. He was asked if he wanted to fight Keith Thurman, and he said “Who’s that? A country and western star?”

Fighting for the third time in his pro career, Vasyl Lomachenko (2-1, 1 KO’s) defeated the previously unbeaten Gary Russell Jr (24-1, 14 KO’s) by a 12 round majority decision to win the vacant WBO featherweight title. Lomachenko was given a second shot at winning the title by the WBO after he was beaten by Orlando Salido last March. Russell Jr didn’t have the body punching skills that Salido had, and he wasn’t able to back him up the entire fight the way Salido had in beating the Ukrainian fighter.

What Does Roberto Duran Mean To You?

Russell Jr throw more shots than Lomachenko in the fight, especially in the last 6 rounds. But Russell Jr’s shots didn’t have the same impact as Lomachenko’s.

In the last half of the fight, Lomachenko hurt Russell Jr a number of times with hard head and body shots. But each time he tried to finish him off, Lomachenko would get nailed with one of Russell Jr’s big shots, and that caused him to back off.

It’s going to be interesting if Top Rank promoter Bob Arum would be willing to let his star Nonito Donaire fight Lomachenko. Donaire was already beaten by one of Arum’s other fighters Guillermo Rigondeaux last year. It would be very surprising if Arum puts Donaire in with Lomachenko, because we’d likely see Donaire get beaten again. It’s in Arum’s best interest to keep the more popular Donaire winning, and Lomachenko would likely spoil things for Donaire. Other than Donaire, Lomachenko has a few options, but none of them are particularly good. He could fight Nicholas Walters in a unification bout, but Walters doesn’t have a big fans base in the U.S. In other words, casual boxing fans won’t care if those two fight.

Former IBF/WBC light heavyweight champion Chad Dawson (32-2, 18 KO’s) got a rare knockout in stopping George Blades (23-6, 17 KO’s) in the 1st round. Dawson knocked Blades to the canvas three times in the fight.

Dawson came into the fight weighing 202 lbs after missing the contracted weight of 179 last Friday at the weigh-in. He then gained back 20 pounds of water weight to fight Blades. The fact that he took off so much weight seems to suggest that Dawson has outgrown the light heavyweight weight class.