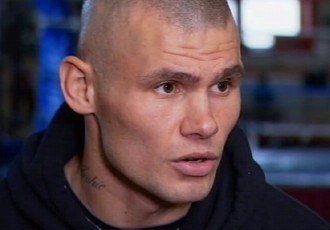 The victory moves the 31-year-old Murray a little closer to another world title shot, which he hopes will be against WBC middleweight champion Miguel Cotto in the near future. Murray won on the judges’ cards by the scores 117-112, 119-109, and 119-109.

Murray fought well enough to win every round, but one of the judges gave Bursak some of the closer rounds. Bursak was landing constantly, but he lacked the power to decisively win the round. Murray had a little more on his shots, and this enabled him to get the better of Bursak. It wasn’t great stuff from Murray, because he should have been able to destroy this guy for him to be considered on the same level as Cotto, Gennady Golovkin and Peter Quillin. Murray said this week that he sees himself as the best fighter in the middleweight division. But he hardly looked like the best at 160 tonight. He just looked like a good middleweight contender but not a world champion level guy.

With Murray not likely to come to the U.S to fight him, and Cotto not interested in traveling to Monaco or elsewhere in Europe to defend his title, it limits Murray’s chances of getting that fight.

On the undercard, 6 WBA Mateusz Masternak (32-2, 23 KO’s) was outworked and out-punched by the stronger and busier #7 WBA Youi Kalenga (20-1, 13 KO’s) in losing a 12 round split decision by the scores 116-112, 115-113 for Kalenga, and 115-113 for Masternak. It’s hard to see Masternak winning this fight because he was so badly outworked by the stronger Kalenga. Masternak was taking big shots from round one until around the 9th when Kalenga lost power on his shots, and started getting sloppy. But even then, Masternak didn’t come on the way he needed to against the fading Kalenga.

For Masternak, this was his 2nd defeat in his last 4 fights and a pretty good indication of where he’s at on the world scene. He’s a decent contender, but it doesn’t look like he’s got the stuff needed for him to ever become a world champion.