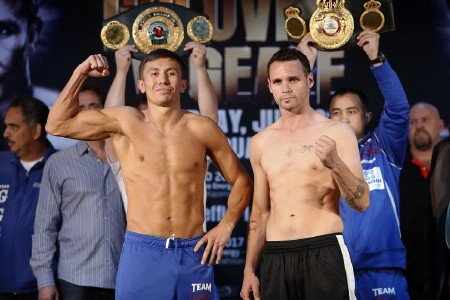 (Photo credit: HBO/Will Hart) At today’s weigh-in, WBA middleweight champion Gennady Golovkin (29-0, 26 KO’s) scaled in at 159.8 pounds for his fight against former IBF/WBA middleweight champ Daniel Geale (30-2, 16 KO’s) for Saturday night. Geale, who looked pale and not particularly defined, weighed in at 159.2. Golovkin looked ripped up in comparison, and showed a lot more definition than the Australian fighter.

The fight card will be taking place at Madison Square Garden in New York, and Golovkin’s promoter Tom Loeffler of K2 Promotions expects a crowd of around 7,000 for the 18,200 seat arena. If this was a fight involving New York favorite Miguel Cotto, MSG would no doubt sellout, but Golovkin is from Kazakhstan and he lives in Germany. You can’t expect him or the Australian Geale to sellout the Garden.

The co-feature bout between heavyweights Bryant Jennings (18-0, 10 KOs) and Mike Perez (20-0-1. 12 KOs) could very well steal the entire show because it promises to be a far more competitive match-up. That’s not a knock on Geale, but let’s not kid ourselves about him. He did lose to Darren Barker last year, and that pretty much tells you all you need to know about Geale. He stands no chance against Golovkin. But the southpaw Perez could make it interesting against the long-armed Jennings, who has faced weak opposition thus far.

Perez weighed in at 242.2 lbs. Jennings weighed lighter at 222.6 lbs. What the weight difference tells you is that Jennings is going to need to try and keep Perez from getting inside on him in this fight if he wants to win it, because his long arms don’t translate to big power when he’s got a guy crowding him the way that Perez likes to do. A very average Andrey Fedosov gave Jennings problems when he was able to get inside on him last year.

Jennings was able to stop Fedosov in the 6th, but it was a close fight up until the stoppage. If Perez is able to get inside on Jennings, he could work him over for 12 rounds. Jennings likes to move around, but he’s not able to do it for long without needing to stop and flick out some jabs. Those jabs aren’t going to trouble Perez much. Jennings is going to need to beat Perez in a war if he wants to get the win on Saturday. Can he do that? I have my doubts. Perez brings in a much better amateur pedigree than Jennings.