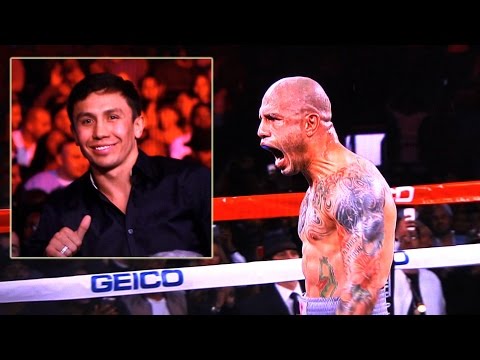 Lineal middleweight champion Miguel Cotto made the first defense of his middleweight crown against former unified middleweight champion Daniel Geale in front of a packed crowd at the Barclays Center in Brooklyn, New York. The bout took place at a contractually agreed upon catch weight of 157 pounds, which caused displeasure among many boxing fans who are sick and tired of the recent catch weight trend. Cotto dominated the action in the fight where his left hook to the body and face led the charge in his attack. Cotto looked fresh, fast, and strong, whereas Geale seemed lethargic, timid, and uncertain. Cotto ultimately finished matters in round 4, when Geale decided not to continue after suffering two vicious knock downs during that stanza. 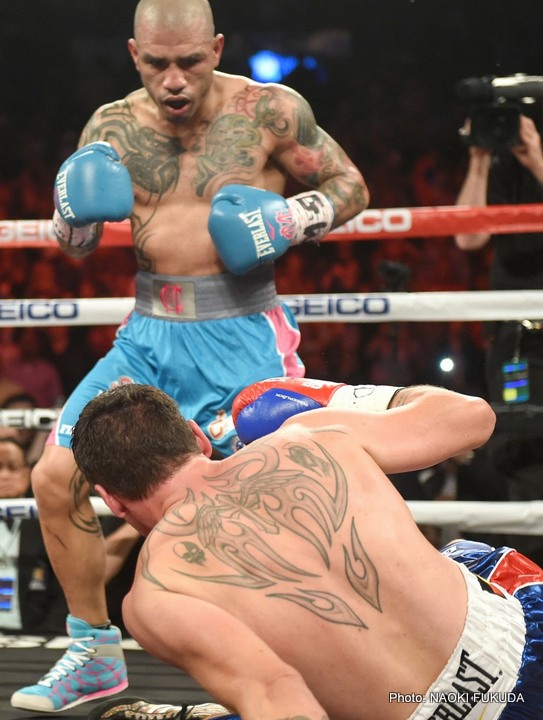 Miguel Cotto stopped Daniel Geale in the 4th round to defend his WBC middleweight title last night at the Barclays center in Brooklyn, NY. This was the first defense of the belt Cotto won with an excellent performance against veteran Sergio Martinez last year. The winner grabbed the trophy and ran for a whole year before he made a “prudent” choice of bypassing the real challenges in favor of fighting a no-threat opponent. His reluctance to face his mandatory GGG has transpired unequivocally and it seems he would rather be stripped than face a middleweight proper. Apparently he and his team will sit on the title and negotiate its release rather than make a a stand for it – those “middies” hit too hard anyway.

Cotto commented: “My weight yesterday was 153.6 pounds; you think I’m a middleweight? I’m not.”

That’s as clear as it gets regarding a GGG showdown. The Puerto Rican champ stated that if people want his fight with Saul Alvarez to happen, it will happen. He must have noticed that more people appear to want him to step up to his obligation and face his WBC mandatory challenger. 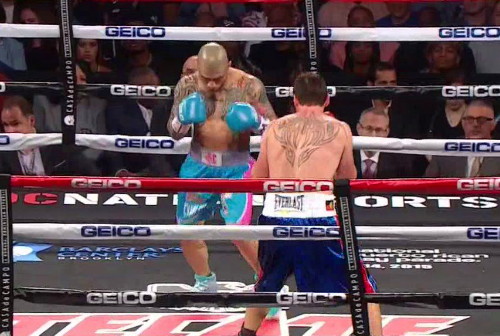 WBC middleweight champion Miguel Cotto (40-4, 33 KOs) paved the way towards a possible fight against Mexican star Saul “Canelo” Alvarez by stopping an over-matched, underpowered Daniel Geale (31-4, 16 KOs) in the 4th round on Saturday night to successfully defend his World Boxing Council middleweight title in front of 12,157 fans at the Barclays Center in Brooklyn, New York.

Geale, 34, quit after getting knocked down twice by Cotto in the 4th. Geale looked like he could have continued after getting up from a knockdown, but he opted instead to fight another day by telling the referee Harvey Dock that he didn’t want to continue fighting. The bout was subsequently stopped at 1:27 of the round. 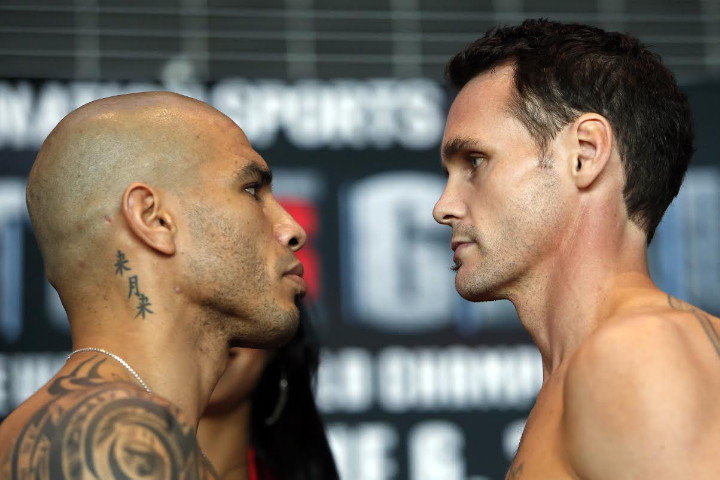 (Photo Credit: Will Hart/HBO) WBC middleweight champion Miguel Cotto (39-4, 32 KOs) came in really low at 153.6lbs at his weigh-in today for his title defense on Saturday night against Australia’s Daniel Geale (31-3, 16 KOs) at the Barclays Center in Brooklyn, New York. Cotto looked like he overestimated how much weight he needed to strip off in order to make his own 157lb catch-weight.

By coming in lower than he needed to, Cotto kind of shot himself in the foot because he didn’t need to strip off nearly that much weight. 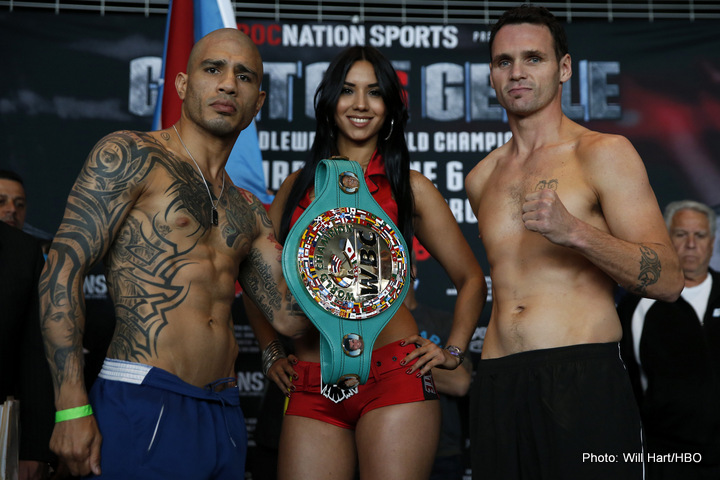 LONDON (5 June) – Middleweight world champion Miguel Cotto believes he would have too much for either Canelo Alvarez or Gennady Golovkin if they were to share the ring.

The WBC champion makes the first defence of his title this weekend against Australian Geale from the Barclays Center in New York, live and exclusive on BoxNation.

Much talk prior to the Geale showdown has circled around potential clashes with Mexican idol Canelo and rising pound-for-pound star Golovkin, but four-weight world champion Cotto believes he would be at an advantage if he was to face either man. 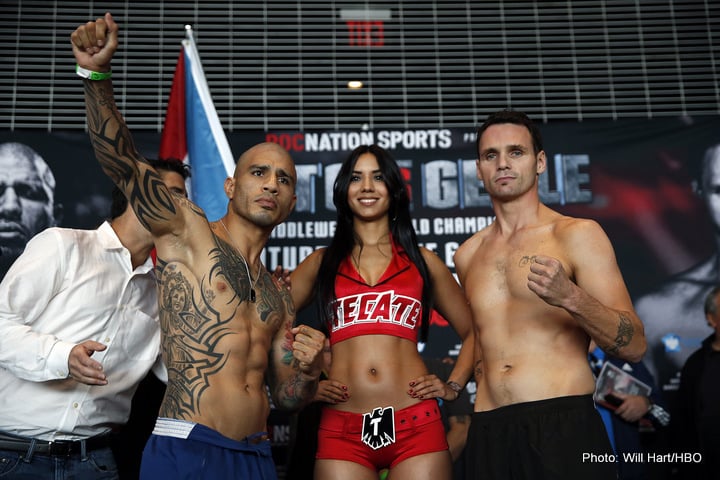 Live on HBO from the Barclays Center in Brooklyn, New York, Miguel Cotto and Daniel Geale meet for the lineal middleweight title. Instead of breaking down the X’s and O’s of the matchup the pugilist masses are mainly fixated on the number 157. That is the number Geale must hit to prevent a possible cancellation. Cotto’s image has taken a big hit of late and even if he does make a big statement this Saturday night the damage is deep. They might as well of called this fight Cotto vs. Geale: To Catch A Mockingbird.

Barring a minor roadblock the only major obstacle that stands in the way of an HBO PPV fight between Miguel Cotto and Canelo Alvarez is Daniel Geale. The Aussie has middleweight contender pedigree it’s just too bad that this bout won’t be contested at 160. Instead, this bout will be fought at a catchweight of 157 pounds. Judging by the comments made by both camps in the lead-up it sounds as though sticking to their guns is the plan. 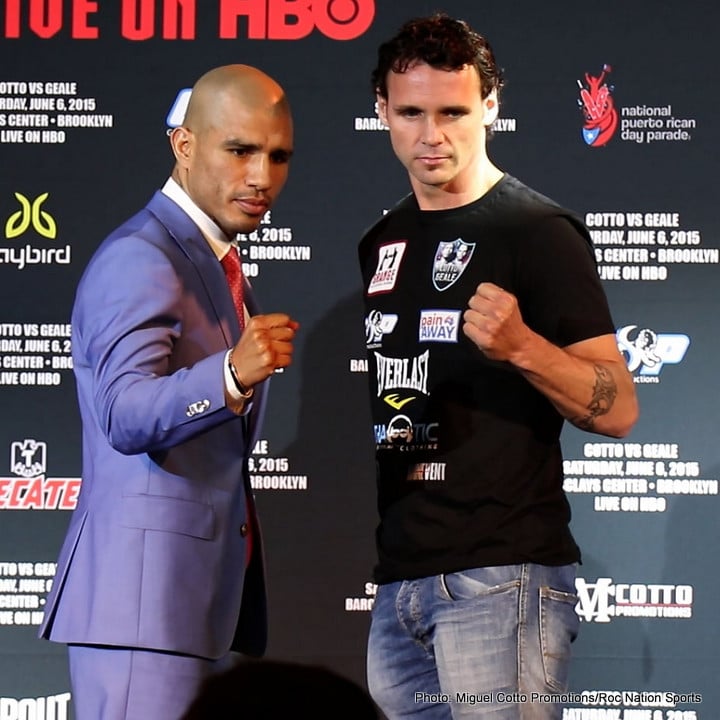 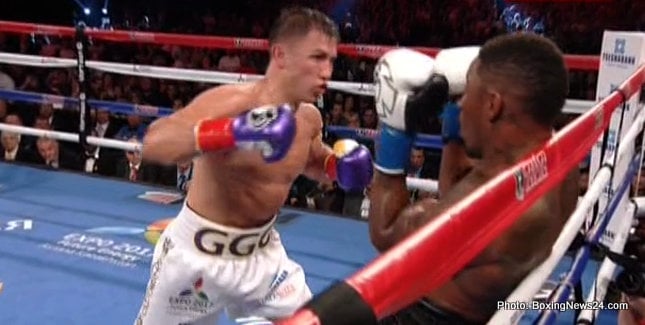 It could well be more bad news for Miguel Cotto ahead of this weekend’s WBC middleweight clash with Australia’s Daniel Geale, as his mandatory challenger, Kazakh wrecking machine Gennady Golovkin plans on making an appearance at the fight – ostensibly to force the Puerto Rican into facing up to his mandatory responsibilities.

“I want to watch this fight in person and look forward to fighting the winner to show who the real WBC middleweight champion is.”