Gennadiy Golovkin appeared to be taking a dig at his opponent Canelo Alvarez for Saturday by telling the fans today at the Grand Arrivals in Las Vegas that he wants “clean Sport.”

This would appear to be Golovkin taking a shot at Canelo (57-2-2, 39 KOs), who tested positive for the banned PED clenbuterol in the past.

If Golovkin’s goal was to try and anger Canelo enough to make him fight like an angry bull on Saturday night, he might succeed. Canelo is already talking about wanting to KO Golovkin for his previous comments about him.

If Golovkin continues to talk about wanting a “clean sport” up until Saturday, Canelo could be furious.

In a refreshing change, Golovkin (42-1-1, 37 KOs) chose to speak without the use of his interpreter when interviewed during the Grand arrivals today, and his charisma and charm came through and won over the fans in attendance. Golovkin’s personality shows through when he speaks without his interpreter, as he’s a lot livelier.

Interestingly, Canelo chose to speak Spanish and use an interpreter rather than speaking English like he’d been doing.

“I have great memories from my last two fights [in Las Vegas against Canelo]. Come on, guys,” said Gennadiy Golovkin, speaking without the use of an interpreter.

“I’m very happy to be here again to see you again, guys. It’s the same. Maybe one or two more dinners, more burgers, more tacos,” said Golovkin when asked what’s the difference in preparing to make weight at 168 compared to 160.

“Two more dinners per night. Extra tacos, five tacos. This is not just me. This is for sport. I want to bring back the boxing position, bring back.

“I want a clean sport. I’m a huge boxing fan. Come on, guys. I want to bring back position,” said Golovkin.

“I’m always 100% focused for any fight I go into, so that’s what I have in my head. To be 100% focused on this fight,” said Canelo Alvarez to iFL TV about Saturday’s trilogy with Gennadiy Golovkin.

“It’s really important for me this kind of fight. For my legacy and for all these people here. So I’m really hoping I can put on a good show for the people that are coming here,” continued Canelo.

“I don’t know. We’ll have to wait to see on Saturday there,” said Canelo when asked what we’ll see from Golovkin fighting at the full weight of 168 for the first time.

“I know that I’m preparing for the best Gennadiy Golovkin, but I’m going to see what I can put on in that fight. We’ll have to see on Saturday what he brings.

“It’s always really important to represent my country on important dates like this. I hope I can put on a really good on the Mexican Independence Day on Saturday for my fans from Mexico,” said Canelo. 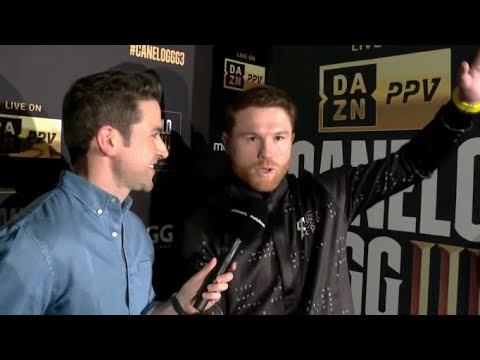