If ever the term, ‘born to fight’ was appropriate, it certainly is in the case of the man born Stanislaw Kiecal, better known as Stanley Ketchel. Ketchel was born to Polish immigrants in Grand Rapids, Michigan, on September 14th of 1886. Ketchel was also seemingly born tough, avoiding school, and preferring to run with a gang. At the tender age of just 12, Ketchel ran away from home, becoming a hobo. Growing up in Butte, Montana, Ketchel found work as a bouncer.

Ketchel then fought in backroom booths, daring any man to challenge him, fighting with $20 bucks on the line. Ketchel was on his way to earning a living from fighting at the elite level.

Ketchel is today rightfully revered as one of the absolute greats. Nat Fleischer called Ketchel the greatest middleweight ever. Most famous for his ring battles with Billy Papke, Philadelphia Jack O’Brien, and Jack Johnson, Ketchel compiled an astonishing 51-7-3(46) pro record. This by the time he was just 24 years old.

Ketchel was, as history informs us, killed at age 24, shot in the back by a man named Walter Dipley, who flew into a jealous rage over a woman. Ketchel bled to death.

In the ring, Ketchel was fearless. Going pro in May of 1903, the 16-year-old Ketchel moved to California in 1907, looking for the big fights. Ketchel fought at an incredible pace, with him having 13 fights in 1904, and an insane 18 fights in 1905. The 5-foot, 7-inch, two-fisted, rock-chinned, fight anyone 160-pounder defeated Joe Thomas over 20 rounds to win the vacant world middleweight title; this after battling to an earlier 20-round draw, one that was followed by a 32nd round KO win over Thomas.

The title win was in December of 1907, and then, in February of the following year, Ketchel defeated Mike Twin Sullivan to become the universally recognized world middleweight ruler, via first-round KO. Ketchel then engaged in his fiercer than fierce rivalry with Billy Papke. Four times these two warriors raged at one another, with the X-rated violence reaching nothing short of epic proportions.

Ketchel won the first fight by non-title decision, Papke knocked Ketchel out in the 12th round of the rematch, taking the title, and then “The Michigan Assassin” won fights three and four – Ketchel administering such a beating to Papke in fight three, won by KO in round 11, that his own wife was unable to recognize Papke after the fight. These two iron men took turns dishing out and taking sickening amounts of punishment during a time when pro fighters really were a different breed; poverty and unimaginably hard times driving them on.

After the third fight with Papke, Ketchel fought former light-heavyweight champ Philadelphia Jack O’Brien. Ketchel took a real beating in the early rounds, only to come roaring back to score no less than four knockdowns over the course of rounds nine and 10. O’Brien was knocked flat at the end of the tenth round, yet the bell had gone and he was saved, the fight being declared a No Decision. In a return bout, Ketchel KO’d O’Brien in the third.

Then, in October of 1909, in arguably his most famous fight, Ketchel fought reigning heavyweight king Jack Johnson. The two are said to have agreed to box 20 rounds, with each man to follow the carefully devised script. But Ketchel “double-crossed” Johnson in round 12, belting him with a savage right hand that dropped the heavyweight champion. Johnson (whose account of the fight is the one people go by, seeing as how Ketchel was dead just a year later) then “got up smiling,” before making Ketchel “pay” for his sneak attack. Johnson is said to have ripped several teeth from Ketchel’s mouth, leaving him flat out unconscious for some minutes.

Ketchel moved on and, after losing a decision to Frank Klaus, he faced the legendary Sam Langford in April of 1910, the two boxing six rounds. Reports vary, but most say Langford was too good for Ketchel. Certainly, Langford won the decision. Many, many fighters of the time avoided Langford like the plague. There was talk of a rematch, yet it never happened.

Ketchel had just three further fights, all of them KO wins – with Porky Flynn, Willie Lewis, and, on June 10, 1910, Jim Smith being despatched.

Ketchel is buried in Grand Rapids. He was enshrined in The Hall of Fame in 1990. Ketchel may indeed deserve to be ranked as the greatest middleweight of all time. 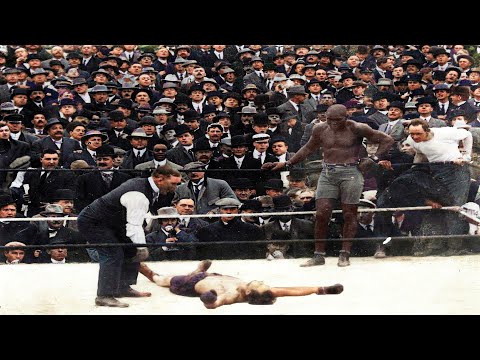