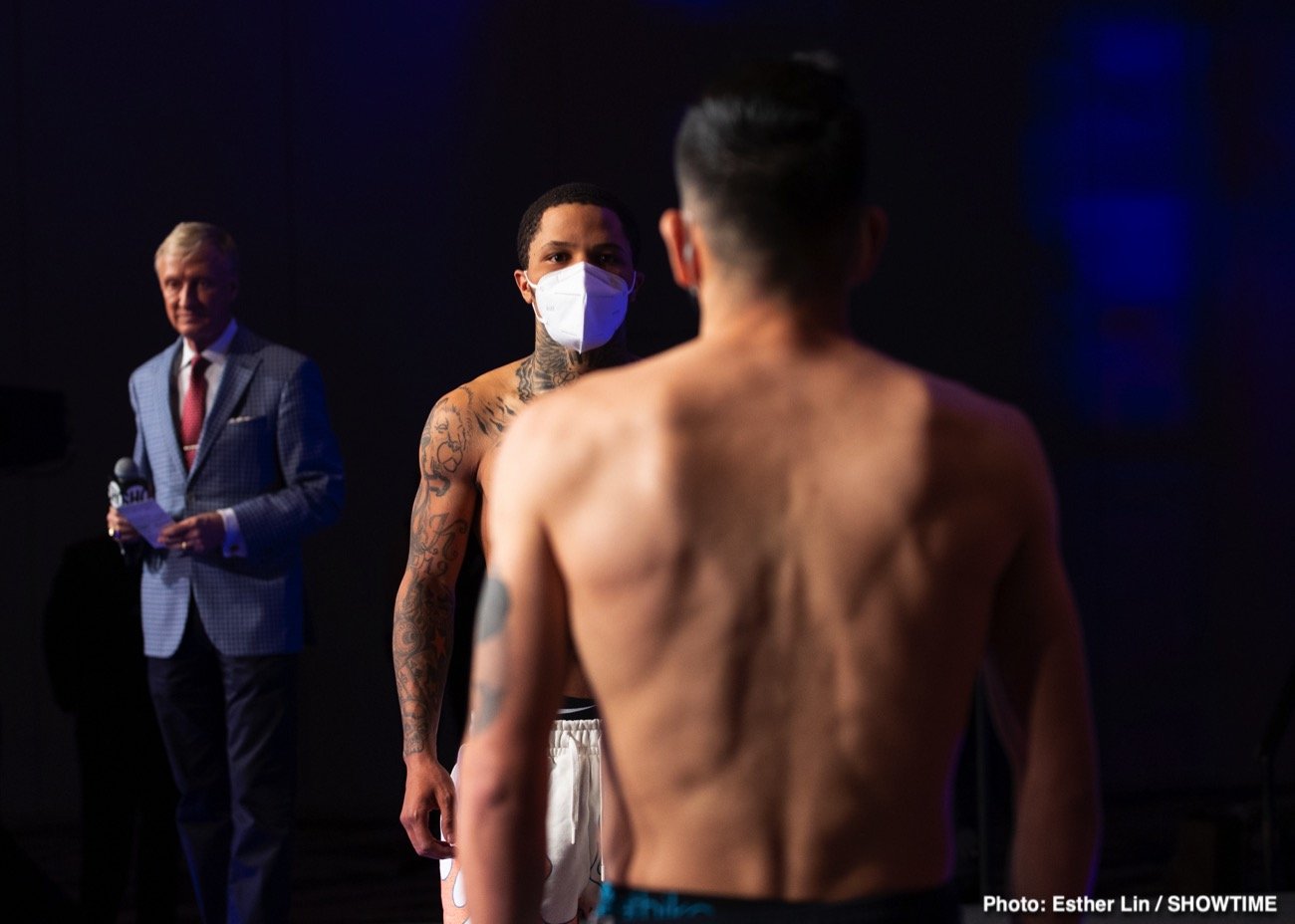 The biggest topic for Saturday nights Showtime PPV headliner between Gervonta Davis and Leo Santa Cruz is how each fighter’s body will react in the ring to the 130-pound division. Gervonta has struggled to keep his weight down out of training camp and lost his title back in 2017 because he couldn’t shed enough to make junior lightweight. Leo Santa Cruz has exactly one fight at 130 and didn’t look all that great last November as the Wilder vs. Ortiz 2 co-feature. Regardless of how this fight plays out, how we get there should be at the very least eventful.

Much has been made of Gervonta ‘Tank’ Davis’s out of training camp blow ups in weight causing many to just assume he won’t make the contractual agreed upon 130-pound limit. Usually weight and injuries fall into two categories: legit reason or an excuse for losing or looking bad. Yes, Tank hasn’t always been the most discipline fighters, reminder there are many in the sport, but this time it does look like he is ready to roar in his first PPV main event. An image was posted on IG showing Davis around 135 on a scale and this was around two weeks out. Another image was posted showing off his six-pack, so there’s a good chance Tank is going to make 130 (pending weigh in of course) and be healthy on fight night.

Like many boxers throughout history it’s not normally the slacking during the actual training camp but the over eating and weight gain between fights. We’ve heard to story a million times, case in point is Sugar Ray Leonard knowing Roberto Duran would be deep in to celebration mode from their first meeting prompting my favorite fighters of all time to push for the rematch ASAP. Last December we all saw a Davis performance that wasn’t up to par versus Yuriorkis Gamboa, looking not all the different in his fight with Francisco Fonseca back in 2017. Tank got the stoppages in both fights but he wasn’t able to show his true potential as a boxer/puncher who throws combinations.

When Davis is 100 percent tuned in he has more skills than most are willing to admit and the speed/power pairing makes him as dangerous as any around 130 to 135. At 130, if he can get there happily so to speak, is where he shines the brightest at this juncture of his career. Not talking big fights like at 135 where Teofimo Lopez, Vasiliy Lomachenko, Ryan Garcia, and Devin Haney all reside. Just pinpointing how great he can be at 130 for now based off several outings in the past.

As a fighter, Tank likes to take his time as he inches closer to his foe, digging to the body and countering with fierce accuracy. Tank can be close to his man and not get hit flush but still deliver a fight changing blow. The question is will we see that Tank versus Leo?

Leo Santa Cruz is a quality fighter who throws a ton of punches and always comes to put on a good show for the fans. Leo is known for his punch output for good reason but his skills get underrated. The rematch with Carl Frampton highlights Leo not depending on only outworking his opponent. Santa Cruz actually used his length advantage and was able to keep Frampton at bay and flustered for much of the fight. His jab was the major key as it will be in the main event of this Showtime PPV. That said Leo shouldn’t overuse the jab unless he’s having extreme success otherwise if he doubles or triples his jab he could leave himself wide open to Tank’s counters.

This boxing lover understands why Santa Cruz is the underdog and also understands he didn’t look as good back in November as he did at featherweight. But he did at the very least get a fight in at 130 and now had some time through the summer of Covid-19 to possible settle in at the weight. One thing that is for sure, his body looks the best it ever has so similar to Tank making 130, will have to wait and see. For the fans that say Santa Cruz is way past his prime and shot or shopworn, that is overstated. After all what fight took so much out of him that he is now over the hill? And from a skills point of view, sure I don’t think Leo can stick and move all night but the fact that he beat the fighter of the year in 2016 in the rematch using a different game plan has to add up something in the skills department.

DAZN sucker-upper Chris Mannix things Leo is completely shot and also predicts we’ll see a one-sided slaughter ending by vicious KO in the 6th round. Clearly speed and power especially at junior lightweight favors Tank, for Mannix it’s more of a way to rip a PBC PPV as a horrendous mismatch. Any time a fighter faces the best competition of their career it has to be put into the equation of why the fight got made and the possible outcomes. Some will say Jose Pedraza is best boxer on Gervonta’s resume but some of those same folks now think Pedraza’s best weight is 135 or 140. The point being, it’s perfectly okay to think Tank wins most of the rounds and even by stoppage but you can do it without cheapening the event and/or Leo Santa Cruz in the process. At this stage in Gervonta’s career Leo represents a real test and at the end of the day this fight is still important even if he does white-wash Leo as many experts think.

The opening round or two will likely feature faints and just a few moments of actions or flush lands. Look for Leo to do exactly what him and his corner have been saying in the lead up, that is try to box on the outside of the pocket. Staying on that topic, Leo did say him and his brother hadn’t worked on a different strategy in Frampton 1 so when his father told him to switch it up he wasn’t able to. In the rematch training camp the outside jab and smarter punch output was a main focus. I say that to quell some of the talk about Leo not having his father in training camp 24-7. If jab and faints, along with pop in Leo’s punches is effective we should know by round 3 or 4. If not Tank will proceed to walking Santa Cruz down landing heavy shots to the body which sooner or later will create openings up top.

This hack-of-a-scribe envisions Leo having early success and then limited as the fight drags on. Tank will time Leo and land a huge shot that will render Leo a tad bit tentative. As the bigger shots continue to rain down Leo will be on the ropes in ear-muff guard but that’s not to say Santa Cruz won’t go out on his shield. The weight will play a role for either guy if not both pending the Friday weigh in. A late stoppage is possible and if Tank is in the zone as it would seem in camp he could get a knockout. A two-way start turns into Davis pulling away with the cleaner shots and fast twitch ability that is a step too far for Leo. Beyond weight, Santa Cruz’s defense will likely be a red flag on this level against this type of opponent.

My Official Prediction is Gervonta Davis by Unanimous Decision.

Side Note: Don’t forget to checkout Usyk/Chisora on DAZN and Inoue/Moloney on ESPN+ along with a slew of undercard bouts across the board on Saturday.