George Kambosos Jr. is waiting to see if Devin Haney will agree to the contract offer that his promoter has given him for a June 5th fight in Melbourne, Australia.

The IBF, WBA, WBC Franchise & WBO lightweight champion Kambosos says the deal that is being offered to WBC belt holder Haney is the same exact one that Vasyl Lomachenko had agreed to before he chose to remain in Ukraine to defend against the Russian invasion.

If Haney chooses not to accept the deal, Kambosos will move on and fight someone else on the June 5th date. His promoter Lou DiBella already has a venue in mind at the Marvel Stadium in Melbourne. The only thing they need is for Haney to agree to the contract offer, and they move from there.

This will be the first title defense for Kambosos (20-0, 10 KOs) for his four lightweight belts that he won off of Teofimo Lopez last November in New York.

“We’ve got a guy in America that has been given something that,” said Kambosos Jr in referring to Devin Haney, who was elevated to WBC lightweight champion outside of the ring.

“If that guy in America is a man of his word and he said he’ll take the same deal that Lomachenko would take, then I’ll see you here in early June in Melbourne.

“I’m not going to take anything away from him, but they weren’t fight of the year, to say the least,” said Kambosos on Haney’s last two contests against Joseph ‘Jojo’ Diaz Jr. and Jorge Linares.

“I’m not going to give him too much negatives because I want to make that fight happen,” said Kambosos. “I want to make him out like he’s the best thing since sliced bread.

“When I beat him up and take that little toy that he’s got, it just shows you what I’m about. Look, we’ll see. There are a lot of moving pieces.

“Boxing is always moving. I’ve had so much adversity during my career, especially with the Lopez fight.

“We’ll do it by the end of the year, but his country’s going through a tough time. @VasylLomachenko has a bigger fight and I respect that.”

We catch up with @georgekambosos to get all the latest on his defence against @Realdevinhaney pic.twitter.com/BfpOAOIgNU

“I’ve got all the belts, and I’m going to continue to do what I do best and that’s inside the ring, training and getting better. Faster, sharper, stronger, more ruthless than ever and go back and I can’t wait to defend what’s mine at home.

“It was done,” said Kambosos when asked how close was the Vasyl Lomachenko fight from being made. “It was a couple of days from being fully done, but it was there.

“The venue is all set. Who wants it? If he’s a man of his word, Devin Haney, then I’ll see you in Melbourne,” said Kambosos.

“He’s gonna make a lot of money,” Kambosos said about Haney. “Let’s just hope for the boxing world that he knows where the airport is, he’s got his passport up to date, and he’s not afraid of flying 19+ hours. Because it’s all easy behind a computer screen or a phone,” said Kambosos in talking about the trash-talking Haney has done on social media.

“There’s another guy in the US that likes to talk behind the fence, well that fence is open now, let’s see how much bark there is,” said Kambosos. 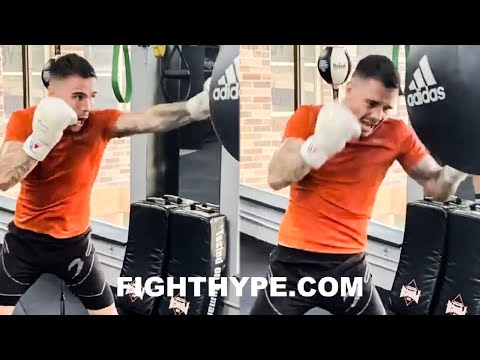