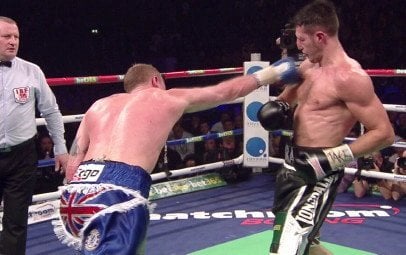 Froch and Groves fought last year in November in a fight where the referee Howard John Foster stopped the fight in a controversial fashion in the 9th round with Groves still on his feet and fighting back after having been buzzed by a right hand from Froch. It was controversial because Froch threw a flurry of shots with almost every punch missing.

The referee saw the punches being thrown but he didn’t take into account that Froch was unable to hit anything even with Groves standing point blank range in front of him. Groves was knocked off balance when Froch bumped him hard into the ropes. The referee perhaps thought that Groves fell backwards from a punch, but in fact it was from Froch having bumped him.

One gets the sense that Froch would have taken another fight with the likes of Julio Cesar Chavez Jr. or Gennady Golovkin if he could have gotten either of them in the ring by May. However, neither of those fights were there for Froch at this time, and he would have had to wait a considerable amount of time if he wanted to face Chavez Jr.

Froch will make better money in the rematch with Groves than he would either of those guys, because he would need to give them both a much bigger purse split for them to agree to fight him. With the Groves fight, Froch can get the lion’s share simply because it’s seen as a normal title defense.