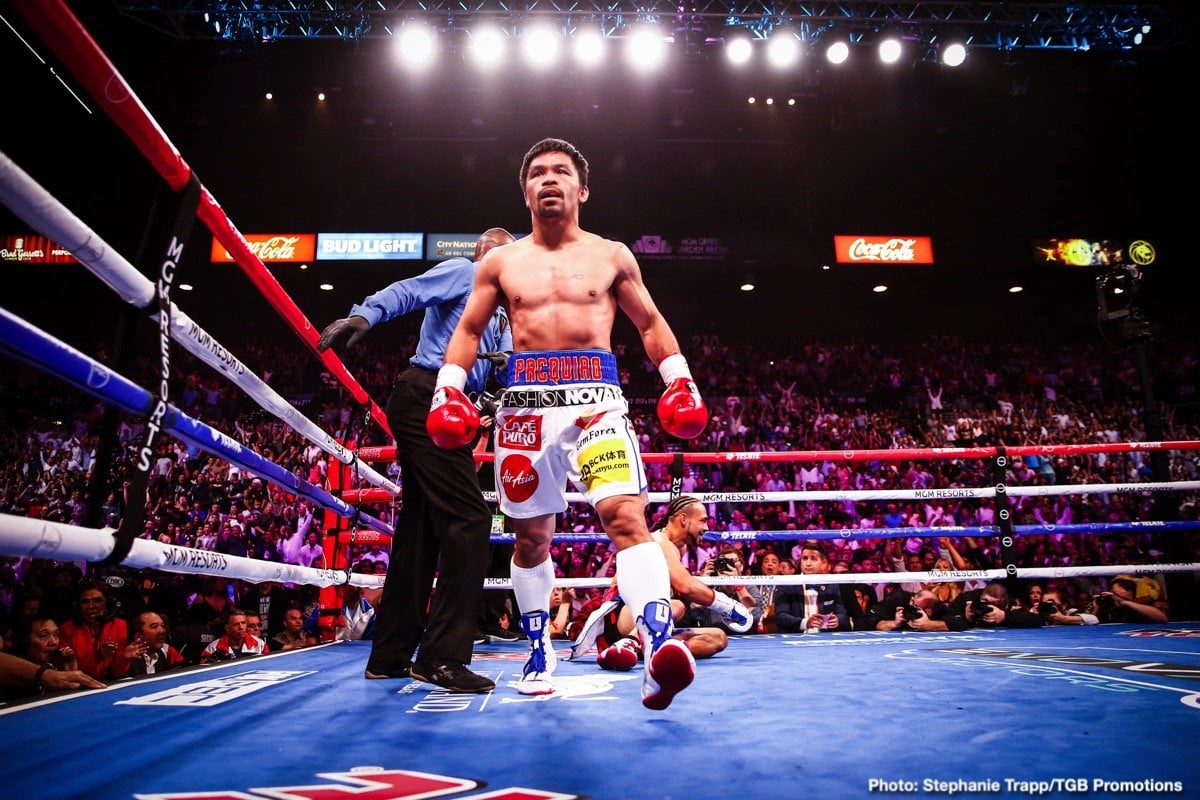 It’s absolutely no secret that Manny Pacquiao craves a second fight with Floyd Mayweather. So too does Pacquiao’s trainer Freddie Roach, who feels strongly a fully healthy Pac Man can beat Mayweather (as in with no shoulder injury). But in speaking with The Manila Bulletin, Roach said he feels Pacquiao, with his brilliant winning performance against Keith Thurman, scared Mayweather off.

As fans know, Floyd was in attendance at the Mayweather-Thurman fight in Las Vegas, even getting into the ring ahead of the bout. But as Roach noted, Mayweather neither hung around after the fight nor called out Pacquiao. Some thought “Money” would indeed look to take over the show on July 20th, by calling out Pacquiao and even announcing a date for the sequel.

But no, Mayweather was surprised, and not in a good way, by Pacquiao’s amazing performance at the age of 40. This is Roach’s take on it, anyway.

“He didn’t stay at the fight after the decision was announced and call anyone out like he usually does,” Roach said of Mayweather. “I think Manny scared him a little with that performance. In my opinion, I think he’s scared of Manny. That performance was so great, he showed everything in that performance.”

In addition to what Freddie had to say, Sugar Shane Mosley, who fought both Mayweather and Pacquiao, told PhilStar Global that had it been Mayweather in there with Pacquiao that night instead of Thurman, Manny would have won.

“What’s sure is if Manny fought Mayweather instead of Thurman that night, he would’ve won,” Mosley said. “I actually think Manny won the first fight against Mayweather.”

It will likely strike fans as strange that Mosley feels Pacquiao did enough to have deserved the decision at the conclusion of the so called “Fight of the Century” back in May of 2015, but a rematch would almost certainly be a different story. Pacquiao, judging by the show of skills and durability he delighted us with in the Thurman fight, has aged better, and has more left, than Mayweather. Mayweather was even caught by a few shots in his heavily hyped fight with MMA star Conor McGregor, and Mayweather’s legs were not what they once were in the August 2017 clash.

Pacquiao and Roach feel they would get the win if the rematch took place. And with so much mega-money on offer to box a sequel with the man he widely outpointed, it might seem odd that Mayweather is not interested. Did that great Pacquiao display against Thurman really give Mayweather the chills?