Javier Fortuna walked up to Golden Boy Promotions boss Oscar De La Hoya during Wednesday’s media workout and pointed his finger in his face, and told him that he’s going to ‘knockout Ryan Garcia’ this Saturday night in their main event fight on DAZN.

Fortuna then did a throat slash to put an exclamation point on what’s going to happen to the 23-year-old Ryan in their 12-round fight at the Crypto Arena in Los Angeles.

De La Hoya looked surprised at Fortuna (37-3-1, 26 KOs) letting him known point blank that he’s going to KO Ryan, but he seemed to respect him for his honesty.

Ryan vs. Fortuna is a year overdue because it was supposed to happen in July 2021,  but King Ry pulled out of the contest due to mental health issues.

Now a year later, the former WBA super featherweight champion Fortuna has been beaten by Joseph ‘Jojo’ Diaz, causing the Ryan-Fortuna clash to lose some of the lusters that was there a year ago.

Rather than give up on the idea of fighting Fortuna, Ryan chose to reschedule, and this Saturday, we’ll see the two battle.

The only thing Ryan can prove in this fight is whether he can do a better job of beating Fortuna than Jojo Diaz did because that’s the only compelling thing about the contest.

With Ryan talking night & day about how he’s going to fight Gervonta ‘Tank’ Davis in December, it’s important that he destroy Fortuna to show that he deserves the match and, more importantly, that he’s ready for it.

“It shows you the excitement and the potential of Ryan’s return to LA,” said Oscar De Hoya to Fighthype about Ryan Garcia’s headliner against Javier Fortuna on Saturday night on DAZN.

“It was formerly my home. Now, it’s Ryan’s home for many years. I think I’m going to go knockout in a very tough fight,” said De La Hoya in predicting a stoppage win for Ryan Garcia over Fortuna.

“In every fight there’s a certain plan for him [Ryan] to get better, for him to learn, for him to step up his game. This fight here is that one step away from challenging everybody.

“We feel confident that Ryan is going to be successful, and from there, the sky’s the limit. Not every fighter can be Mike Tyson,” said De La Hoya about Garcia not being able to knock out every opponent.

“Once you step up in competition, once the fighters get tougher, once the experience is at a different level, then you’re going to go the rounds. There’s no way around it. 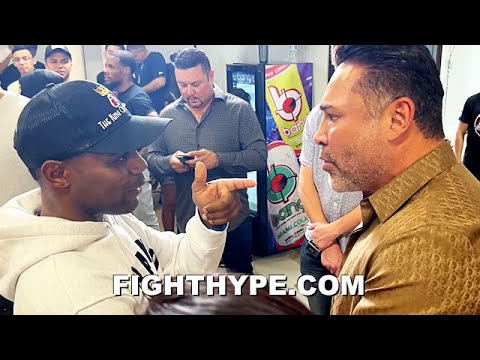