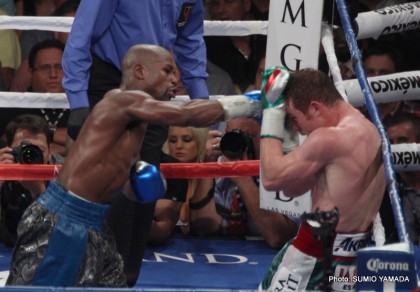 The judges did the right thing and agreed on a winner. It wasn’t an easy fight to score but they did not disappoint and the decision is acceptable. It should have been a UD though. Anyway, the fight was tough to score and even tougher to watch. Both fighters underperformed and they had to lure each other out of inactivity while both wanted to box on their own terms and wouldn’t fight the other guy’s fight outside their comfort zone.

There was a hot debate on a size advantage before the fight and it turned out there really was one, only it was in Floyd’s favor. He looked bigger, more muscular with longer and stronger arms. Floyd is about an inch taller and his reach is about two inches longer than Alvarez’s, but their stances and styles made Floyd’s advantage look even greater than what “the tale of the tape” suggested.

The superior range feel of Floyd and his “preventive” timing neutralized Alvarez’s conventional attack most of the time. “El Canelo” turned out to be a credible challenger even with his limitations. He has a typical Mexican style and fast hands and wasn’t “flat footed“ at all but he needed his opponent to engage and fight back. That’s what the Mexican style is about. Floyd wouldn’t oblige and tried to “hypnotize” Alvarez into standing still. It didn’t work and even the shoulder roll had little effect on Alvarez as he was able to sneak shots into it. Mayweather was trying to impose his pace, Alvarez wanted his erratic tempo, in the end they both fought with their natural rhythm. Alvarez could not draw Floyd into a “drag race” and Floyd could not make “El Canelo” take breaks.

The tactics of throwing jabs to the Mayweather’s chest perhaps had some merit and that’s why Alvarez’s jab stats looked so bad. According to the punch stats, he landed a very low percentage of his jabs, but punch stats do not reflect intentional shots to the chest and arms.

“El Canelo” showed poor sportsmanship on two occasions – when he threw a weak low blow and when he “shouldered” Mayweather – and he did himself no favors with that. It was a clean fight and Alvarez let his frustration show, that’s unacceptable but excusable. Then he refused to apologize and rejected Floyd’s “touch gloves” invitation – this is unsportsmanlike and no way to be “macho”. Inexcusable. Get in line, amigo, and get in line fats. No need to embarrass yourself with useless substandard behavior. Fair play should be among the first words you learn in English.

Doing a round by round analysis would be a cumbersome and boring effort like the fight itself. Floyd has a polished routine and his arm punches landed clean and visible. Even though Alvarez landed the harder shots in the fight, Floyd’s scoring shots were more and easier to see. Alvarez’s three punch combos were often effective but he could not really bother Mayweather. Mayweather threw mainly single shots as usual so there was no threat of a stoppage on either side. Floyd won beyond doubt and there is no need for a rematch.
Saul Alvarez deserves credit for his effort; he was a worthy challenger and fought bravely. He doesn’t have what it takes to defeat Floyd Mayweather. Not now and not next year. I had favored ‘El Canelo” in this fight but if there is a rematch, I may not have the patience to watch it and I’ll have to “fast forward” through it.