Floyd Mayweather is pretty angry right now. The all-time great, having seen his former “rival” Conon McGregor shocked to defeat in last night’s big MMA rematch with Dustin Poirer, took to social media to unleash an epic Instagram message. In his message, “Money” claims that the fans that “love” McGregor, in turn “hate” him. Mayweather says the fact that he is “hated” and McGregor is “loved,” proves that “racism still exists.”

Mayweather added how “nobody wants to see” a Manny Pacquiao Vs. Conor McGregor fight, as it is “my leftovers eating leftovers.” 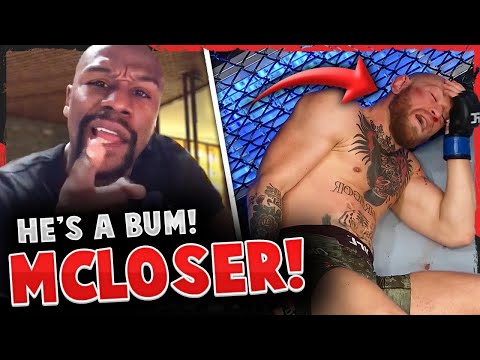 Now, in light of how he was knocked out by Poirer, that Pacquiao-McGregor fight is almost certainly gone for good (and plenty of boxing fans are happy about this). But Floyd sure ain’t happy.

“I see this post and my take on it is that the world knows Con Artist McLoser can steal everything from me and be loved but I’m hated. That lets you all know that racism still exist,” Floyd wrote. “Just know, that bum will never be me or be on my level. I’m just built different, my mindset is on another planet, my skills are second to none. I’m a natural born winner and yes I talk a lot of trash, but every time I back it up. This is why they hate me. It’s sad that you can be a poor black kid from the ghetto that has dealt with racism your whole life and work extremely hard to put yourself and your family in a better position, and most of the hate come from my own people. Conor cannot even win in his own sport, but talking about coming back to boxing to fight Pacquiao. Nobody wants to see that, it’s like my leftovers eating my leftovers.”

Again, that Pacquiao-McGregor fight seems to be dead in the water now. But why does Floyd feel he is “hated?” By whom? Is Mayweather angry because his upcoming exhibition bout with Logan Paul has generated poor interest and poor pre-fight pay-per-view sales, to the extent that the “fight” has been postponed? Now, if you want to talk about a fight nobody wants to see, Mayweather Vs. Paul is it.

Nobody could ever deny Mayweather’s greatness in the ring, and nobody ever does so. Neither do we “hate” Floyd. Still, Mayweather sure thinks plenty of people do hate him. That is perhaps the saddest thing.