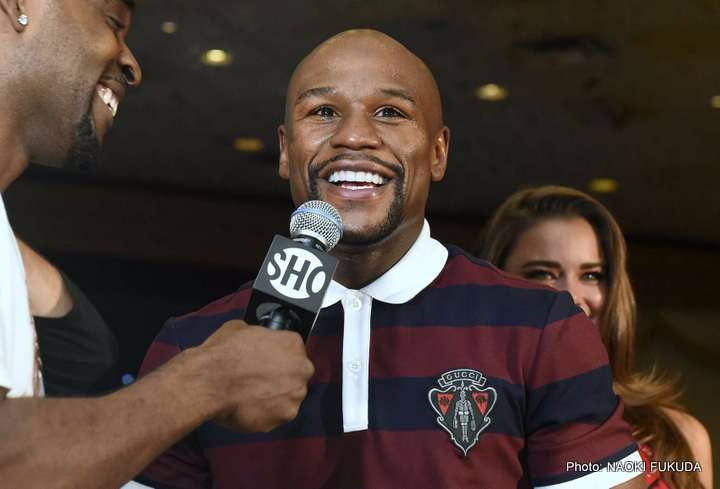 Will he or won’t he? Will boxing superstar Floyd Mayweather Junior return to the ring for a 50th fight or not? The 49-0 master recently returned to the gym to spar, once again sparking off suggestions that his ring return is imminent. Mayweather, who turns 40 next February, is said to have looked as sharp as ever in the spar session and the thinking is, he must be back sparring for a reason.

And many people think that reason is, Floyd is getting himself ready to rumble; once more at least. It is of course no coincidence that fellow megastar Manny Pacquiao fights tonight, at least Floyd’s returning to the gym to spar so close to Pac-Man’s ring return is no coincidence in the minds of some people.

It is possible that Mayweather, who last boxed in September of 2015, was checking his stuff hasn’t deserted him, that his reflexes, timing and zing are still in order. It’s also possible that Floyd’s recent spar meant/means zilch.

Mayweather himself gave little away when speaking with his fave website, Fighthype yesterday.

“My dad asked me when I was coming back. You know, is the door still open? Absolutely,” Mayweather said. “It [the spar] felt okay, I guess. I don’t miss it. I got in there to spar; it was a lesson I was teaching the young fighters in the gym. I may need a little bit more time off, you know, because as of right now, I’m not missing it.”

Mayweather explained how he feels different from day to day, that some days he thinks nothing about fighting again, whereas on others he is thinking along different lines. Who knows, maybe, if he sees Pacquiao look like a million bucks against Jessie Vargas tonight in Las Vegas, “Money” will let the businessman inside him take over as the possibility of another $100 million fight rears its head.

For as long as Mayweather and Pacquiao are still anywhere near the sport of boxing, talk of a rematch between the two will be there. It would be no great shock if the two all-time greats met in a fight-two next May. Some boxing people are convinced the sequel will be made.