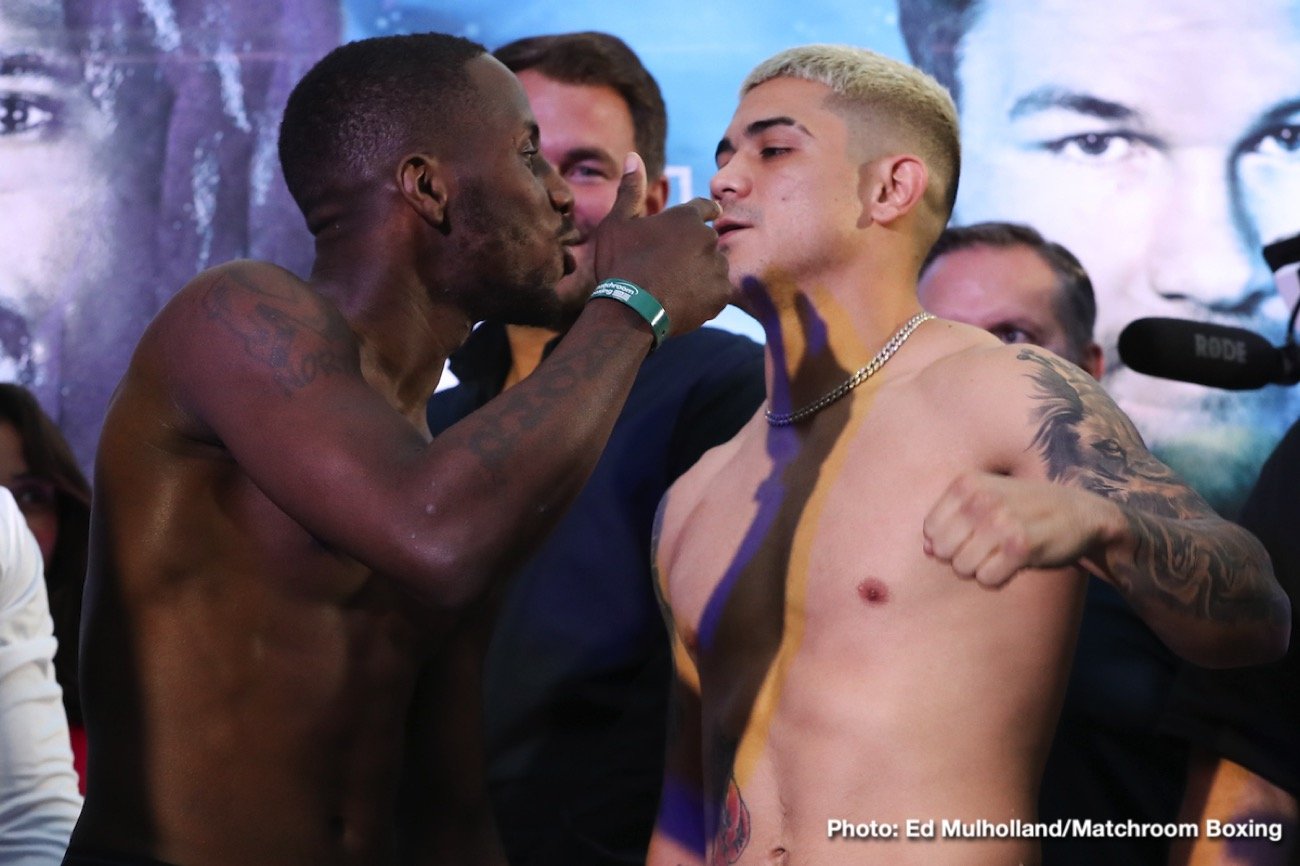 On the Thursday leading up to the Super Bowl, DAZN has an interesting card especially two matchups below the main and co-main events. The night will be topped by Demetrius Andrade taking on little known Luke Keeler and a fight between YouTubers Jake Paul and AnEsonGib. Hardcore’s don’t be alarmed for there are two fights that should give us plenty of meat on the bone to gnaw on. Tevin Farmer and Joseph Diaz do battle for Tevin’s IBF 130-pound strap and Murodjon Akhmadaliev challenges a unified 122-pound champ in Daniel Roman.

Let’s begin with Tevin Farmer and ‘Jo Jo’ Diaz because these two have been going at it on social media for some time now so it’s nice to see them in the ring to settle their differences. As you probably already know, Farmer has impressively strung together 23 wins in a row and a no-contest after starting his career 7-4-1. Along with way he defeated Ivan Redkach, Billy Dib, Francisco Fonseca, and Jono Carroll. Definitely not a murders row of opponents but his activity is a good thing to see. Farmer’s story is one of perseverance and hard work making it a heart-warmer.

All that is fine and dandy, not to mention inspirational, but Farmer is at the point that quality over quantity should be the goal moving forward. And Joseph Diaz fits the bill of a live opponent who may be peaking at this precise time. Diaz built his record all the way to 26-0 as a prospect moving up the ladder to full-fledge contender. Jayson Velez, Andrew Cancio, and Manuel Avila represent a few solid names on Diaz’s resume for wins. His only loss came by the fast hands of Gary Russell Jr. in May of 2018. The fight was clearly going GRJ’s way throughout until the later rounds Diaz began to push the pace. It was too little too late for the Downey, California resident as he dropped a decisive decision loss. Diaz has collected 4 wins since then and now looks to take advantage of this major opportunity.

Diaz should plan on revving his engine much earlier this Thursday night on DAZN versus Tevin Farmer then he did against Russell Jr. Of course Russell Jr. and Farmer don’t necessarily fight in the same exact manner but both do like to use a sharp jab and foot movement to pile up points on the judge’s scorecards. One thing we will find out is just how efficient Diaz is at cutting off the ring because Farmer is every bit the outside mover. Some label it as a runner or getting on your bike, if that’s the case Farmer may be on his ten-speed for portions of the night. It will depend on how aggressive Diaz will be as far as how much Farmer will be on the move.

Farmer does have the ability to stand in the pocket or at the very edge while still being responsible on defense and with a 3 inch reach this hack-of-a-scribe does think will see a tad less mobile Farmer.

Look for Farmer to faint and jab rapidly in the opening frames before he lets loose with power shots. Farmer probably learned a thing or two from that Russell Jr. fight, so don’t be surprised to see combinations off that jab. The formula for ‘Jo Jo’ is pretty straight forward and that will be to apply as much pressure as possible. Diaz will get picked apart if he is hesitant beyond a minor feeling out process in the first few rounds. Body shots and punches to the hip as he cuts the distance and makes this a rough-and-tumble affair is a must for Diaz. This will be a closer fight round by round then Diaz vs. GRJ and in the second half the outcome will be 100 percent on the table for either man. It won’t be a thing of beauty or win the fight of the year but Tevin Farmer will out-skill and out-land Joseph Diaz.

My Official Predictions is Tevin Farmer by Majority-Decision.

The other matchup that has this boxing podcaster excited to watch is Daniel Roman vs. Murodjon Akhmadaliev. On the books this fight is basically a 50-50 with the challenger actually the ever-so-slight favorite. The champion Daniel Roman is riding a 19 bout winning streak and looks to make it 20 on Thursday night. Roman’s last fight was a candidate for fight of the year in 2019 against then unbeaten TJ Doheny. Prior to that barnburner brawl, Roman defeated Gavin McDonnell, Moises Flores, Shun Kubo among others.

Roman’s opponent is Murodjon Akhmadaliev, a Uzbekistan native now based out of Indio, California. His nickname is ‘MJ’ and he is part of the wave of Uzbekistan fighters making their way to the states in an attempt to take over at their respected divisions. Akhmadaliev, like many of his teammates turning pro fought in the 2016 Summer Olympics earning a respectable bronze medal at bantamweight.

Roman is a skilled fighter who likes to work at the mid-range and as the 3-minute rounds go by, he slowly inches towards his opposition. When he’s measured his man, he generally turns up the heat advancing with the goal of scoring a knockout or simply punishing his prey. Not to make it sound like he’s a huge puncher because Roman is not. Roman sticks to the fundamental fairly well making him a precise puncher with pop and good timing.

Murodjon is a come-forward fighter who likes to engage his rival with a straight and hard jab that he follows up on with overhand or straight lefts. His punches must be thudding because it seems every time he lands it’s easy to hear. Although a pressure guy, ‘MJ’ does show great patience behind a high guard and stiff jab. His foot placement while cutting off the ring is impressive as he gets himself in the right place to not only land clean but responsible defensively. Akhmadaliev fluidity not just as a puncher but his overall balance in his stance will separate him from most guys at 122. The only flaw this boxing degenerate can see is his looping right hook could get him in a bit of trouble.

Akhmadaliev more than passes the eye test as a professional boxer but as we know that fact alone doesn’t win you fights at the higher levels. The proving ground will be in the form of a very tough test in Roman and I for one can’t wait to see how this one plays out. The better more effective punches down the stretch will be the key for both combatants. Not the easiest fight to predict but that’s the best part of these could go either way on paper matchups.

My Official Prediction is Murodjon Akhmadaliev by Spilt-Decision.

The main event is Demetrius Andrade vs. Luke Keeler let’s hope this won’t be a one-sided sleeper. Also, YouTube stars will help draw a crowd in Miami and maybe even add back some of those youngsters that subscribed to DAZN for the month of November for KSI/Logan Paul 2. At the end of the day as long as DAZN gives us good to great fights I will to my best to ignore these social media based fights.

Side Note: This Friday the main event for ShoBox Ruben Villa vs. Alexei Collado on Showtime. On, Saturday for the PBC on FS1, Yordenis Ugas tunes-up with Mike Dallas Jr. and rising prospect Michel Rivera takes on Fidel Maldonado in a decent step up. 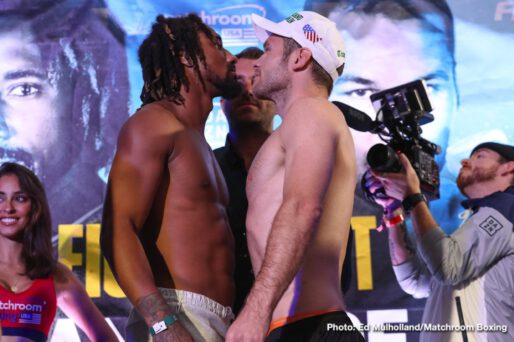 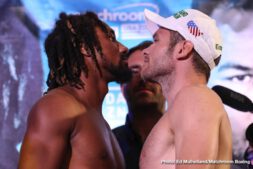 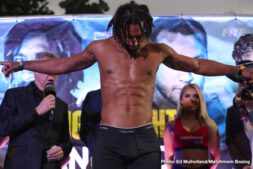 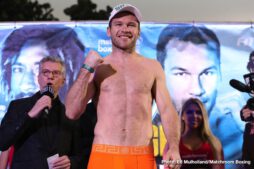 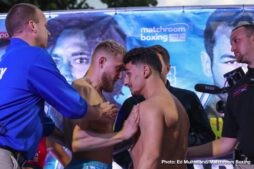 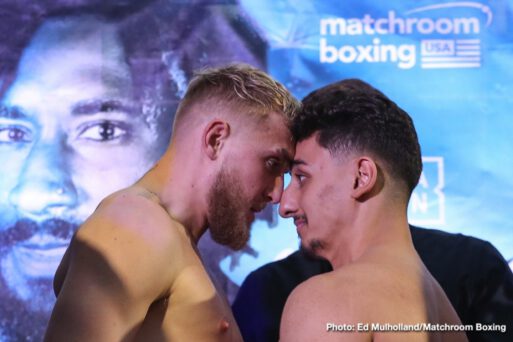 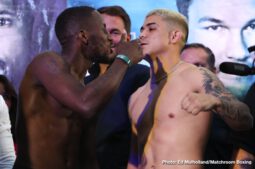 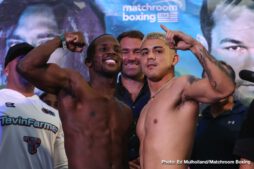 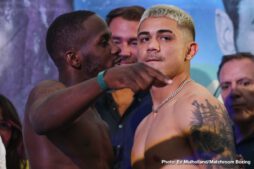 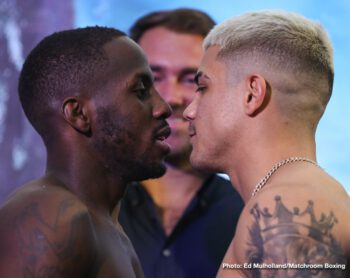 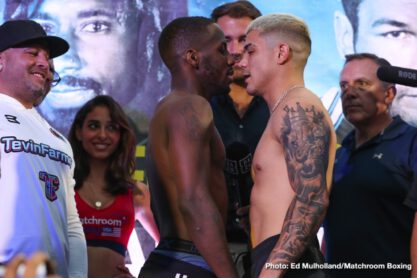 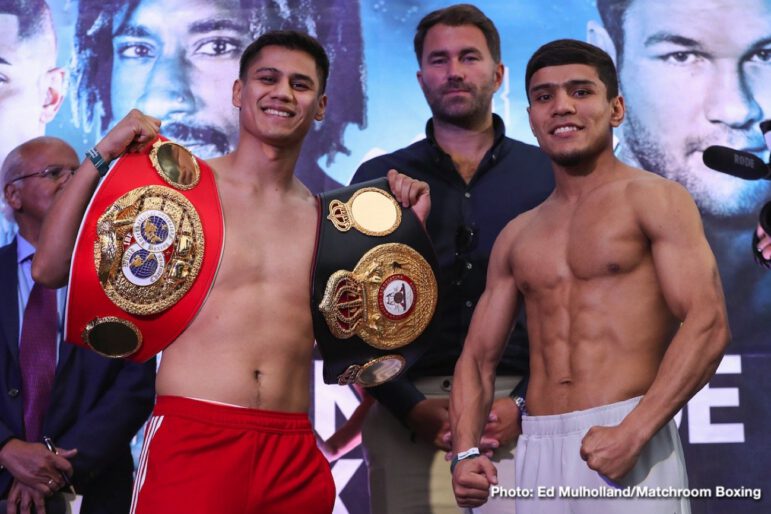 Written by Chris Carlson Host/Producer of The Rope A Dope Radio Podcast Available at www.blogtalkradio.com/ ropeadoperadio & Follow on Twitter RopeADopeRadio